Peace-keeping interventions, defense negotiations, and conflict management often deal with territorial and economic issues, as well as democratization, economic development and state reconstruction, in addition to norms and human rights issues.  Every negotiator knows that “losing face” is a critical factor in every negotiation.

Traditionally, research in Peace and Conflict Studies has been multidisciplinary, comprising a range of disciplines including political science, international law, intelligence analysis, history, social anthropology, and economic history.  It is now time to add neuroscience as a therapeutic tool to provide (a) a bridge between the social and economic sciences and (b) the basics of a biological humanistic approach.

In Emotion Theory and Affect Research it has been argued recently that, tentatively, pride is a primary evolutionary emotion with significant body expression, such as narrowing of the eyes, slightly tucked corners of the mouth, the chin height, and a straightened spine.  Research also shows these expressions are culturally generalized.  Instances of offended pride lead initially to shame reactions that generate primitive impulses of passive or active revenge—such as a vindication maneuver—which offer temporary, immediate relief, but which often lead subsequently to a downward spiral of destruction and further escalation of conflict in the long-term.  And even if the pride and shame expressions were found to be secondary, social expressions, their impact on human psychic health would still be indisputable.

From a neuropsychotherapeutic perspective, these findings have important implications for  dealing with conflicts—not only concerning intra- or inter-conflicts but also, from a wider point of view, within conflicts between states or organizations.  They also have an impact on questions of privacy and private property.

According to Roman Catholic tradition, there are seven deadly sins: lust, gluttony, greed, sloth, wrath, envy, and pride.  These seven sins were seen as the cardinal sins that open the gate to other sins, other vices.

Interestingly, in ancient jurisdictions, revenge was not considered a crime.  Thus, even if pride was regarded as the most serious of all the sins, justice was based on the premise that offended honour could be restored through retribution and restitution.  In the international justice of today, “proportional violence” is commonly accepted; however, it is only since the latter half of the 20th century that revenge, as a model of a juridical principle based on military operations, has been questioned.

The basis—that is, the motor—of retaliation and punishment is a feeling that the individual has been offended.  Clearly, this is most obvious in crimes against individuals—such as assault, rape, and murder.  In cases of fraud, theft, burglary, and so forth, it is equally clear that the individual is also offended by the perpetrator.  Economic claims concern ownership and ultimately are a question of survival.  An attack on private property is experienced emotionally as a personal insult, which triggers automatic secondary pride or shame impulses according to pre-cognitive primitive structures in the automatic nervous system, and also shows the clear link between private property and self-esteem.

In crisis situations the legal system is markedly fragile.  During crises, impulsive demands increase and are very tangible—when in crisis, humans effectively regress to a preverbal survival level.  A crisis situation demands an immediate response; there is no space for a considered strategy—people are removed from structured contexts and lose the everyday experience that gives meaning and continuity to their lives.

In a sharply critical situation at risk of collapse, the masses demanding vindication are often not aware of the kind of vindication that is reasonable, or what their calls for justice are actually expressing.  People together, in a mass, blindly protesting, are easily exploited by political forces.

Again, from a neuropsychotherapeutic point of view, we know that people who are easily offended may have lowered attachment—perhaps stemming from childhood as a result of early trauma or incomprehensible perceptions, or due to cognitive impairment, or having weak, emotionally unstable relations; or people who have not been helped to control emotional chaos or their own naïve, pre-cognitive impulsivity.  There is a perception that politics is sometimes inhabited by ruthless individuals with the characteristic traits of people who are easily offended, working to gain an advantage in their own spheres of influence.  In contrast, we know from developmental psychology that some people are more likely to share than others, and subsequently in adulthood they may find it easier to invent win-win structures out of complex everyday situations.

In contrast, people in crisis situations tend to regress to primitive, pre-cognitive thinking where the first “real” or immediate solution seems to be the impulse.  This impulse is pre-cognitive, a pure reaction—a fight-fright or freeze-and-flight reaction.  In an acute crisis situation, the options available to survivors are very few.  Then, after the immediate emergency situation, they are forced within a very short time to decide on a course of action even when there is likely not enough information for a considered decision.

Charismatic leaders are often characterized by an easy-going persona, to whom delaying a reaction is generally not considered a good option.  Leaders who delay acting in a crisis risk losing command—one might say, therefore, that the primitive shocked masses get the leaders they deserve.  The intelligence quotient of a group is thus likely to be proportionally the reverse of the size of the group—the larger the group, the more sluggish the thinking.  This

is a highly dangerous situation.  In particular, if those leaders who build and escalate conflicts are unaware and ignorant of the impact of even simple messages, they are perhaps at the same mental level of four-year-olds who yell, “He hit me” as a defense—when no one knows how to stop and no one is able to put the conflict into context.

When mass leaders are blindly in step with the relative sluggishness of a mass reaction, their actions must be raised to a level above the impulsive revenge theme—but to do this requires the knowledge and ability to combine economy with conflict management and impulse control.  This joint approach interweaves neuropsychotherapy while shedding light on the individual perspective of peace and conflict research—from a global perspective.

Pride research as a neuropsychotherapeutic instrument is a field of knowledge with the capacity to offer alternative preventive measures in peace-keeping work.  From a peace-keeping perspective, it is essential to understand the cognitive and emotional dysfunctions of individuals in emergency situations; and these must be carefully analyzed to provide instruments that will help prevent escalations of violence and primitive thoughts of retribution.

The Faces of Pride and Shame – a comprehensive chart 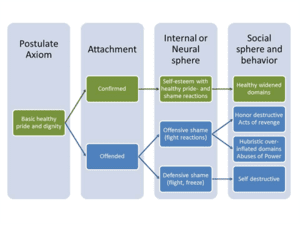 Antonovsky, A. (1996). The Salutogenic model as a theory to guide health promotion. Health  Promotion International, 11, 11-18.