Potent pain-suppression center in the brain is found by neurobiologists 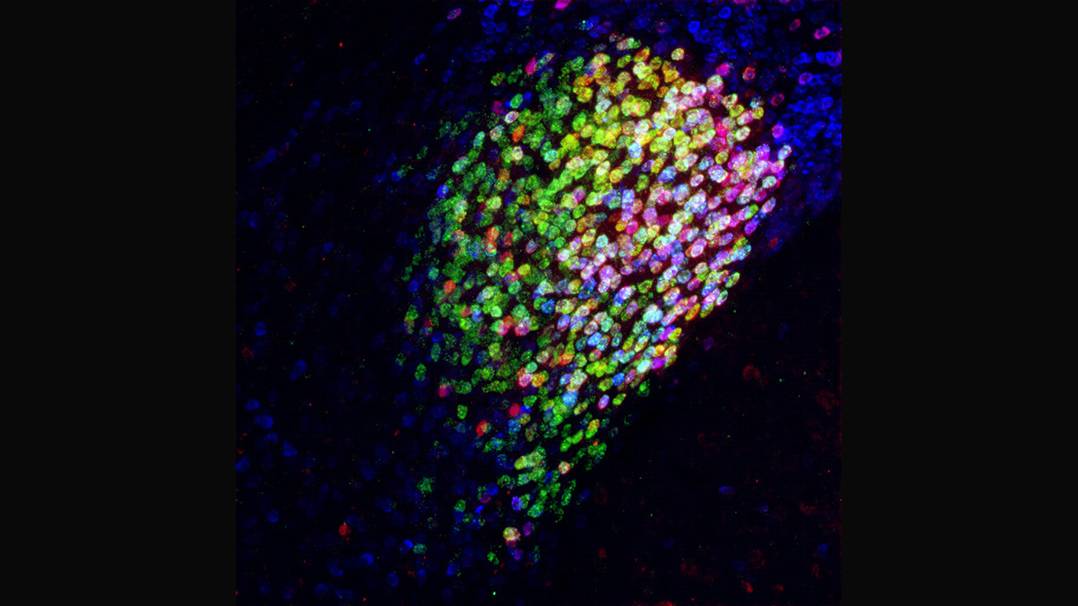 General anesthesia drugs were shown to induce unconsciousness by activating a tiny cluster of cells at the base of the brain called the supraoptic nucleus (shown in red), while the rest of the brain remains in a mostly inactive state (shown in blue). Credit: Duke University

Response of dozens of pain-promotion centers is dampened by single OFF switch.

A Duke University research team has found a small area of the brain in mice that can profoundly control the animals’ sense of pain.

Somewhat unexpectedly, this brain center turns pain off, not on. It’s also located in an area where few people would have thought to look for an anti-pain center, the amygdala, which is often considered the home of negative emotions and responses, like the fight or flight response and general anxiety.

“People do believe there is a central place to relieve pain, that’s why placebos work,” said senior author Fan Wang, the Morris N. Broad Distinguished Professor of neurobiology in the School of Medicine. “The question is where in the brain is the center that can turn off pain.”

“Most of the previous studies have focused on which regions are turned ON by pain,” Wang said. “But there are so many regions processing pain, you’d have to turn them all off to stop pain. Whereas this one center can turn off the pain by itself.”

The work is a follow-up to earlier research in Wang’s lab looking at neurons that are activated, rather than suppressed, by general anesthetics. In a 2019 study, they found that general anesthesia promotes slow-wave sleep by activating the supraoptic nucleus of the brain. But sleep and pain are separate, an important clue that led to the new finding, which appears online May 18 in Nature Neuroscience.

Using technologies that Wang’s lab has pioneered to track the paths of activated neurons in mice, the team found the CeAga was connected to many different areas of the brain, “which was a surprise,” Wang said.

By giving mice a mild pain stimulus, the researchers could map all of the pain-activated brain regions. They discovered that at least 16 brain centers known to process the sensory or emotional aspects of pain were receiving inhibitory input from the CeAga.

“Pain is a complicated brain response,” Wang said. “It involves sensory discrimination, emotion, and autonomic (involuntary nervous system) responses. Treating pain by dampening all of these brain processes in many areas is very difficult to achieve. But activating a key node that naturally sends inhibitory signals to these pain-processing regions would be more robust.”

Using a technology called optogenetics, which uses light to activate a small population of cells in the brain, the researchers found they could turn off the self-caring behaviors a mouse exhibits when it feels uncomfortable by activating the CeAga neurons. Paw-licking or face-wiping behaviors were “completely abolished” the moment the light was switched on to activate the anti-pain center.

When the scientists dampened the activity of these CeAga neurons, the mice responded as if a temporary insult had become intense or painful again. They also found that low-dose ketamine, an anesthetic drug that allows sensation but blocks pain, activated the CeAga center and wouldn’t work without it.

Now the researchers are going to look for drugs that can activate only these cells to suppress pain as potential future pain killers, Wang said.

“The other thing we’re trying to do is to (transcriptome) sequence the hell out of these cells,” she said. The researchers are hoping to find the gene for a rare or unique cell surface receptor among these specialized cells that would enable a very specific drug to activate these neurons and relieve pain.