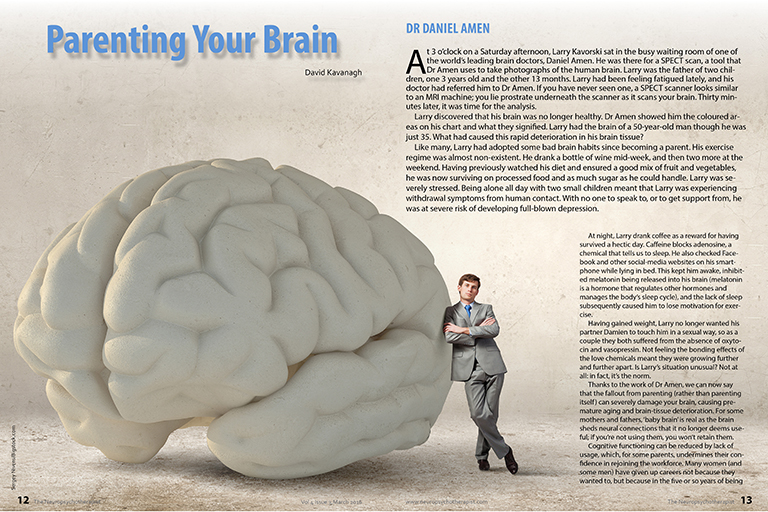 At 3 o’clock on a Saturday afternoon, Larry Kavorski sat in the busy waiting room of one of the world’s leading brain doctors, Daniel Amen. He was there for a SPECT scan, a tool that Dr Amen uses to take photographs of the human brain. Larry was the father of two children, one 3 years old and the other 13 months. Larry had been feeling fatigued lately, and his doctor had referred him to Dr Amen. If you have never seen one, a SPECT scanner looks similar to an MRI machine; you lie prostrate underneath the scanner as it scans your brain. Thirty minutes later, it was time for the analysis.
Larry discovered that his brain was no longer healthy. Dr Amen showed him the coloured areas on his chart and what they signified. Larry had the brain of a 50-year-old man though he was just 35. What had caused this rapid deterioration in his brain tissue?
Like many, Larry had adopted some bad brain habits since becoming a parent. His exercise regime was almost non-existent. He drank a bottle of wine mid-week, and then two more at the weekend. Having previously watched his diet and ensured a good mix of fruit and vegetables, he was now surviving on processed food and as much sugar as he could handle. Larry was severely stressed. Being alone all day with two small children meant that Larry was experiencing withdrawal symptoms from human contact. With no one to speak to, or to get support from, he was at severe risk of developing full-blown depression...