About 8 percent of people will develop post-traumatic stress disorder at some point in their lives, according to the U.S. Department of Veterans Affairs, yet treatments for this debilitating condition remain limited. In a new study, mice exposed to orange essential oil after a stressful situation showed improvements in markers of stress and fear, suggesting essential oil may offer a nonpharmaceutical option to help alleviate PTSD.

Cassandra Moshfegh, research assistant in Paul Marvar’s laboratory at the George Washington University, will present the work at the American Physiological Society’s annual meeting during the Experimental Biology 2017 meeting, to be held April 22-26 in Chicago.

“Relative to pharmaceuticals, essential oils are much more economical and do not have adverse side effects,” said Moshfegh. “The orange essential plant oil showed a significant effect on the behavioral response in our study mice. This is promising, because it shows that passively inhaling this essential oil could potentially assuage PTSD symptoms in humans.” 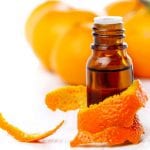 Essential oils are aromatic compounds produced naturally by plants. Orange essential oil is typically extracted from the peel of the orange fruit. People use essential oils for therapeutic purposes by diffusing them into the air, applying them to the skin or ingesting them in foods or beverages.

The researchers tested the effects of orange essential oil using Pavlovian Fear conditioning, a behavioral mouse model used to study the formation, storage and expression of fear memories as a model for PTSD. Mice were exposed to the orange essential oil by passive inhalation 40 minutes before and after fear conditioning. Typically mice freeze in fear when they hear a certain audial tone later, a response that diminishes gradually over time.

Preliminary results point to differences in the gene expression in the brain between the mice that were exposed to essential oil and those that were not, hinting at a potential mechanism to explain the behavioral results. Moshfegh said further studies would be needed to understand the specific effects of orange essential oil in the brain and nervous system and shed light on how these effects might help to reduce fear and stress in people with PTSD.