Social anxiety disorder can cause considerable suffering in children and adolescents and, for many with the disorder, access to effective treatment is limited. Researchers at Centre for Psychiatry Research at Karolinska Institutet and Region Stockholm have now shown that internet-delivered cognitive behavioural therapy is an efficacious and cost-effective treatment option. The study is published in the journal JAMA Psychiatry. 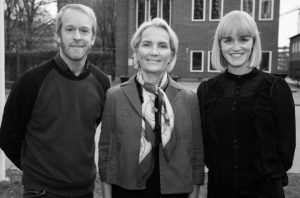 Social anxiety disorder (SAD, previously known as social phobia) has a typical onset during childhood and is characterised by an intense and persistent fear of being scrutinised and negatively evaluated in social or performance situations.

The fear typically leads to avoidance of such anxiety triggering situations or are endured under great distress, resulting in an impaired ability to function in everyday life.

The disability can lead to underperformance in school, social isolation from peers and, inability to partake in leisure activities.

As one of the most common anxiety disorders among youth, the disorder affects 5 to 10 percent of the youth population and without effective treatment it has been linked to long-term psychosocial adversity and persistence into adulthood.

Despite known evidence-based treatments for SAD, such as cognitive behavioural therapy (CBT), the access to effective treatment is very limited.

As a means to increase access, researchers at Centre for Psychiatry Research at Karolinska Institutet and the Child and Adolescent Mental Health Services in Region Stockholm have now developed and evaluated a 10-week internet-delivered CBT (ICBT) programme for young people with SAD.

The study was conducted between 2017 and 2020, and included 103 youths aged 10 to 17 along with their parents. Participants were randomly assigned to either internet-delivered CBT or an active control group, internet-delivered supportive therapy.

The results showed that ICBT was significantly more effective than supportive therapy in reducing social anxiety and comorbid psychiatric symptoms, as well as in increasing the level of global functioning.

The superiority of ICBT was shown in assessments of participants’ symptoms made by masked assessors as well as in ratings by participants themselves and their parents.

According to the researchers, the digital format can also increase access to evidence-based treatment for children and adolescents with SAD.

“Offering treatment digitally means that children and parents don’t have to take time off school and work to travel to a health care facility,” says the study’s first author Martina Nordh, psychologist and researcher at the Centre for Psychiatry Research, part of Karolinska Institutet’s Department of Clinical Neuroscience, and Region Stockholm. “We also believe it may lower the threshold to seeking treatment, as young people with SAD can find it too challenging to meet with unfamiliar people and to be in a new setting.”

Less costly for the healthcare services

The total time spent by the therapists in ICBT was about a quarter of the time normally required by face-to-face CBT for SAD.

“Shorter therapist time enables each therapist to treat more patients and may lead to reduction of waiting times,” says principal investigator Eva Serlachius, child and adolescent psychiatrist and adjunct professor at the Centre for Psychiatry Research, part of Karolinska Institutet’s Department of Clinical Neuroscience, and Region Stockholm. “This also makes digital CBT less costly for the healthcare services and resources can be redistributed to those with greater need of more intensive treatment.”

The researchers are now working on a joint project with Region Stockholm’s Internet treatment unit within the Child and Adolescent Mental Health Services (BUP Internetbehandling) to plan for the implementation and dissemination of the programme via a Swedish national platform.

The study was supported by grants from FORTE (the Swedish Research Council for Health, Working Life and Welfare) and Region Stockholm.