Bonnie remembers seeing an issue of the Harvard Mental Health Letter dated October 2008 entitled “Herbal and dietary supplements for depression” [www.health.harvard.edu) and thinking ‘at last, people are beginning to accept that nutrient treatment of psychiatric symptoms is possible.’

But the excitement turned to disappointment when the article revealed itself to be evaluating nutrients that could be used to “boost” the impact of psychiatric medications. In particular:

Folic acid (“two …studies showed that it may boost response to antidepressants”),

Clearly, the two of us writing this blog are not on the same wavelength with the philosophy that boosting the impact of psych meds is the primary goal of nutrient supplementation! As our regular readers know, we have published a number of studies showing that multinutrient treatment can ameliorate symptoms on their own, enabling people to reduce or eliminate or avoid psych meds entirely.

Is this an important difference? We realize this audience understands the concerns about long term use of medication. There is also worrisome information on short term adverse events. We tried to find the most current data on Adverse Drug Reactions (ADRs) that considered all meds, all ages, both inpatient and outpatient, and for all diseases. The reference cited by most is a bit ‘dated’ by scientific terms (it is 1998), yet seems to be the most thorough, in part because it presented a picture of ADRs that encompassed 30 years in the U.S. (Lazarou et al., 1998). During that time, the number of deaths from ADRs remained pretty stable and high: ADRs were between the fourth and sixth leading cause of death in America. This statistic refers to *all* medications, but as the authors noted, serious ADRs from psychiatric medications were disproportionately high relative to other medications. (For anyone wanting to dissect these numbers further: the death rate analyzed by Lazarou et al. excluded medication errors, noncompliance, dosage errors, and so on — so these ADRs were only the direct, serious ones, triggered by proper use, and resulting in hospitalization or death.) So the bottom line is this: the proper, accurate use of medications, especially psychiatric medications, was the 4th- 6th leading cause of death in America as of a few years ago. (If anyone has comparable scholarly information for the last 15 years, please let us know.)

The above information suggests what we might call ‘the dark side’ of using nutrients to boost the effect of psychiatric medication. Is there a ‘bright side’? We think there is. 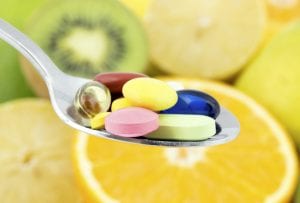 Way back in 2001, Dr. Charles Popper wrote a commentary on one of the earliest studies (by Bonnie and her colleagues) demonstrating the therapeutic impact of a broad spectrum, multinutrient formula in 14 adults with bipolar disorder (Kaplan et al., 2001). Popper described his own case series with the same formula (19 of the 22 patients showed a positive clinical response), and then addressed the issue of the interaction of nutrients with psych meds. In the Kaplan et al. case series, most patients were able to reduce their medications and some became stable with no medications at all. The term Popper used in his commentary was ‘potentiation’: in his hands as well as in the published literature up to that point, the multinutrient formula seemed to potentiate the effect of prescribed psychiatric medications. The solution was simple, though counter-intuitive to some: reduce or eliminate the medications after introducing the nutrients. Sometimes it is referred to as a cross-titration: begin the nutrients, and as you gradually increase those, begin to gradually decrease the medications.

The finding of potentiation has been consistent in studies published since that time. It has always seemed like a good news story to us: enable people to get along on less (or even zero) psychiatric medications, using nutrients which are safe and free of significant adverse events. In 2009, Dermot Gately and Kaplan published a database analysis of 358 adults with bipolar disorder who took a broad spectrum mineral/vitamin formula and tracked their symptoms for a minimum of 6 months (Gately & Kaplan, 2009). A Medication Index was calculated for each individual, based on number and dose of psychiatric medications. The study found that the people with the highest Medication Index were less likely to benefit as much from the micronutrient formula, compared to those who decreased their medications. Lowering medications over the course of the six months was a very significant predictor of benefit from the nutrients. And we have observed these benefits in children as well (Rucklidge et al., 2010).

So what we are suggesting is this: it’s ok to think of nutrients as a way to boost the efficacy of medications, but we should also think of them as a way to replace medications. Can we justify this stance in terms of underlying mechanisms? We think so.

First, just a couple of sentences to provide a context: Neurotransmitters go through many metabolic steps involving their synthesis, uptake, and breakdown. Each of those steps requires enzymes, and every enzyme is dependent upon multiple co-enzymes (cofactors), most of which include a variety of vitamins and minerals. Consequently, as discussed elsewhere (Kaplan et al., 2007), psychiatric symptoms may be the result of inborn metabolic dysfunction associated with slowed metabolic activity caused by insufficient vitamin and mineral cofactors (Ames 2002). Impaired brain metabolic activity associated with other disorders has already been shown to be correctable through nutrient supplementation (Ames, 2002). So perhaps multinutrient treatment is providing sufficient micronutrients that even enzymes with drastically reduced activity become so supersaturated with the necessary cofactors that near-normal function is restored. And if that is so, then medication would no longer be necessary for those functions.

So we would like to request that no further public funds be expended on ways to use nutrients to boost the impact of medications. When we read the recent study showing that people with major depressive disorder who took vitamin D along with their fluoxetine benefited from the fluoxetine more than did people who took fluoxetine alone (Khoraminya et al., 2013), our reaction was that this approach was upside down. How much better it would be to follow these steps: a) give everyone lots of the entire spectrum of nutrients that our brains need every single day; b) while doing so, decrease (or eliminate) all meds; and then c) if and only if the nutrients and other lifestyle modifications were insufficient, begin to add medication to see if it confers any further benefit.

In other words, in the 21st century we need to think of lifestyle changes (diet, exercise, social support/counseling) as the Primary Treatment; medications are sometimes necessary, and they should be thought of as the Complementary or Alternative Treatment (CAM).