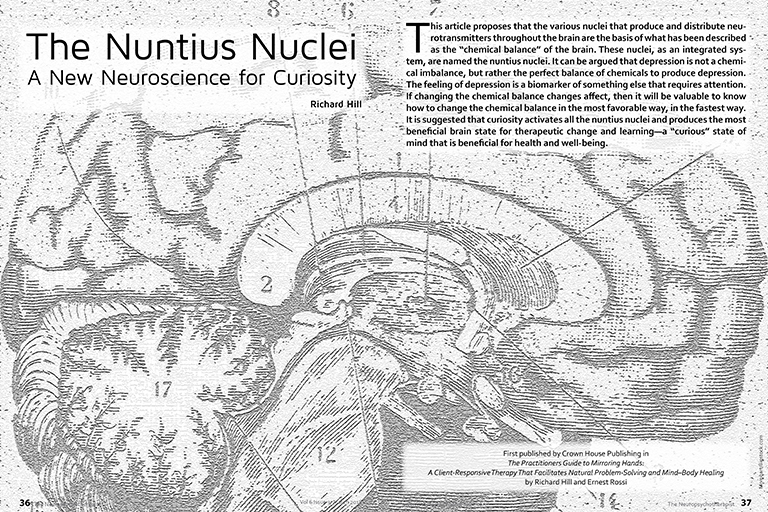 (First published by Crown House Publishing in The Practitioners Guide to Mirroring Hands: A Client-Responsive Therapy That Facilitates Natural Problem-Solving and Mind–Body Healing  by Richard Hill and Ernest Rossi)

This article proposes that the various nuclei that produce and distribute neurotransmitters throughout the brain are the basis of what has been described as the “chemical balance” of the brain. These nuclei, as an integrated system, are named the nuntius nuclei. It can be argued that depression is not a chemical imbalance, but rather the perfect balance of chemicals to produce depression. The feeling of depression is a biomarker of something else that requires attention. If changing the chemical balance changes affect, then it will be valuable to know how to change the chemical balance in the most favorable way, in the fastest way. It is suggested that curiosity activates all the nuntius nuclei and produces the most beneficial brain state for therapeutic change and learning—a “curious” state of mind that is beneficial for health and well-being.

Therapists and teachers know that interested, curious clients and students pay attention and learn more (Berlyne, 1954; Engel, 2013). Stimulating their curiosity makes the job of therapy and the task of being a client so much more successful and enjoyable (Borenstein, 2002). Now, new research is establishing some of the neural mechanisms that explain the connection between curiosity and learning. Gruber, Gelman and Ranganath (2014) show that when the brain is in a state of curiosity, learning is enhanced. They noted that curiosity activated the dopaminergic regions of the substantia nigra, ventral tegmental area and the nucleus accumbens, which then showed a functional connectivity with the hippocampus. They also found that learning is enhanced not just for the target learning, but for peripheral and non-related learning, too. The implication is that curiosity creates a brain state that is primed for learning. From an educational and a therapeutic perspective, producing a state of curiosity is going to be very beneficial for the client’s learning experience.

An important part of building rapport is for the therapist to establish trust and safety and a sense of positive regard. That allows the client to move toward beneficial change.

To facilitate successful therapy, we need the client to be in a receptive and responsive state of brain and mind; this is beneficial for the therapist as well. This, of course, is one of the reasons why therapy is difficult. Someone with depression or anxiety, or in the throes of painful trauma, has a brain and mind that is more often closed, defensive, resistant, avoidant, and insecure. An important part of building rapport is for the therapist to establish trust and safety and a sense of positive regard. That allows the client to move toward beneficial change (Herman, 1998). Whatever change might occur, it will be something that happens at some point in the future. The difficulties are that people get stuck in the past, they can have something to fear or be fearful of the future, and they can be overwhelmed by the present. This state is a fracture in the natural flow of life and can be described as disrupted consciousness. Changing this state of mind—this state of being—is often not an easy task.

As therapists, we want to enable people to move forward with a curious interest to explore possibilities and determine new frameworks for living. Curiosity will facilitate an exploratory mindset (Berlyne, 1950; Dember & Earl, 1957). This needs to occur not only in their conscious, cognitive state but also in their non-conscious inner world. To shift into a new state of being throughout the whole complex system that is our biology, there needs to be more than just a cognitive rationale, but a reorganization all the way down to cellular and molecular activity. We are beginning to understand how new experiences are encoded in cellular and microbiological structures in various ways, including in the DNA as epigenetics (Jaenisch & Bird, 2003) or via the immune system as acquired or adaptive immunity (Holtmeier & Kabelitz, 2005). Learning is a very important component of change.

Considering the whole being often takes a back seat in the pursuit of single pieces of information that provide evidence for a single response—to find the “magic pill”.

There is an increasing pressure for science to provide an evidence base to validate therapy, which has unfortunately led to an emphasis on reductionist, linear, causal perspectives (de Simone, 2006); and consequently, research is often limited to single events or single elements of inquiry. There are good reasons for this, but the process of integration back to the whole person can be neglected or considered too speculative. Specific information certainly has its place and is vital to differentiating the elements, but our biology, from limbs to neurons to genes, is a dynamic, complex, integrated system that operates in an interplay of activity. Considering the whole being often takes a back seat in the pursuit of single pieces of information that provide evidence for a single response—to find the “magic pill”. 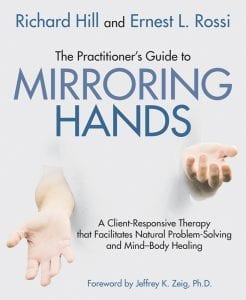 It is vital to know the specific processes of what happens when neurotransmitters are present in the brain and their specific functions in relation to the neuron and the synapse, and this information will inform this paper in many ways. Equally important, however, is knowing how these specific functions engage in a collective, dynamic process that emerges as an emotion or behaviour. The “wholism” I speak of is like a concert performance where it is not just the individual players, or even that they are working together, but the emergent symphony from every member of the orchestra that creates a “state of being” and the qualia of the experience.

Is there a neurobiological system that is at the heart of producing beneficial shifts in mental state? By drawing together a broad selection of single-domain research, I propose that there is a set of brain regions that act collectively to create the brain-state of curiosity. They inform other areas of the brain, especially the midbrain and cortex, through the regulation of neurotransmitter production and distribution, to create emergent mental states. It is not unusual for brain areas to be seen to act as collective systems: the limbic area, the basal ganglia, and the HPA axis are a few examples that come to mind. On a broader scale, each cortical lobe (frontal, temporal, parietal, and occipital) is described as having a different collective function.

These brain areas act together in a dynamic interplay that is essential for creating the neurobiochemical milieu that is experienced as mental state. Within any dynamic interplay there are always linear, causal, and specific functions, but if we can suspend linear, left-hemisphere thinking for a moment, perhaps we can allow ourselves to consider a system where the state of being we call curiosity emerges from the activity of these brain regions as an integrated, self-organizing, complex system…

This has been an excerpt from The Nuntius Nuclei: A New Neuroscience for Curiosity by Richard Hill. 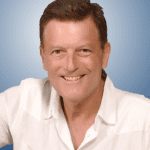