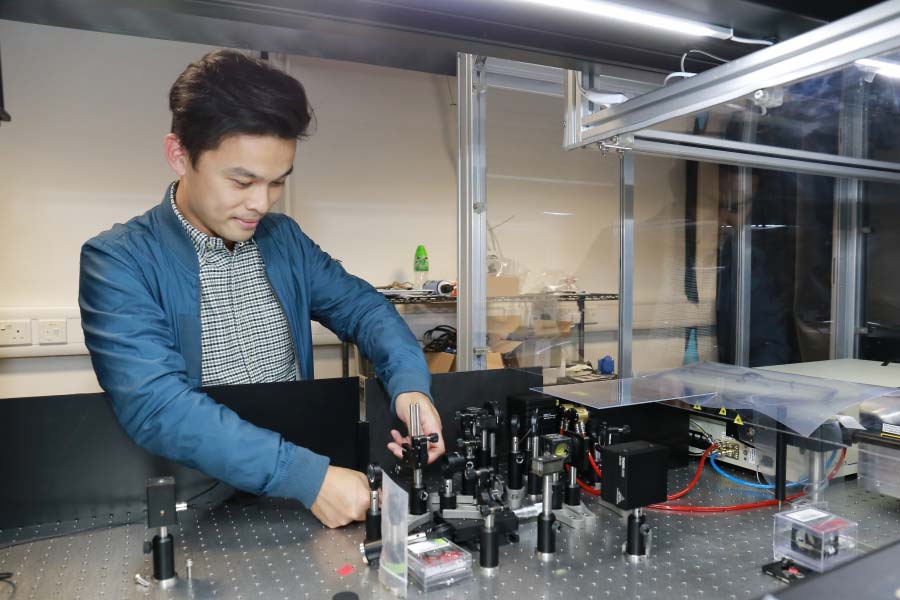 Our brain contains tens of billions of nerve cells (neurons) which constantly communicate with each other by sending chemical and electrical flashes, each lasting a short one millisecond (0.001 sec). In every millisecond, these billions of swift-flying flashes altogether traveling in a giant star-map in the brain that lights up a tortuous glittering pattern. They are the origins of all body functions and behaviours such as emotions, perceptions, thoughts, actions, and memories; and also brain diseases e.g. alzheimer’s and parkinson’s diseases, in case of abnormalities.

One grand challenge for neuroscience in the 21st century is to capture these complex flickering patterns of neural activities, which is the key to an integrated understanding of the large-scale brain-wide interactions. To capture these swift-flying signals live has been a challenge to neuroscientists and biomedical engineers. It would take a high-speed microscope into the brain, which has not been possible so far.

A research team led by Dr Kevin Tsia, Associate Professor of the Department of Electrical and Electronic Engineering and Programme Director of Bachelor of Engineering in Biomedical Engineering of the University of Hong Kong (HKU); and Professor Ji Na, from the Department of Molecular & Cell Biology, University of California, Berkeley (UC Berkeley) offers a novel solution with their super high-speed microscope – two-photon fluorescence microscope, which has successfully recorded the millisecond electrical signals in the neurons of an alert mouse.

The new technique is minimally invasive to the animal being tested compared to the traditional method that require inserting an electrode into the brain tissue. Not only is this less damaging to the neurons but also can pinpoint individual neurons and trace their firing paths, millisecond by millisecond.

The result of this ground-breaking work has recently been published in the academic journal Nature Methods. The project was funded by the National Institute of Health, U.S.

At the heart of the high-speed microscope is an innovative technique called FACED (free-space angular-chirp-enhanced delay imaging) – developed by Dr Tsai’s team earlier (note 1). FACED makes use of a pair of parallel mirrors which generate a shower of laser pulses to create a super-fast sweeping laser beam at least 1,000 times faster than the existing laser-scanning methods.

In the experiment, the microscope projected a beam of sweeping laser over the mouse’s brain and captured 1,000 to 3,000 full 2D scans of a single mouse brain layer (of the neocortex) every second. To probe the genuine electrical signals that pulse between the neurons, the team inserted a biosensor (protein molecules), developed by Dr Michael Lin of Stanford University, into the neurons of the mouse brain.

“These engineered proteins will light up (or fluoresce) whenever there is a voltage signal passes through the neurons. The emitted light is then detected by the microscope and formed into a 2D image that visualises the locations of these voltage changes,” said Dr Tsia.

“This is really an exciting result as we now can peek into the neuronal activities, that were once obscured and could provide the fundamental clues to understanding brain functions and more importantly brain diseases,” he added.

Apart from electrical signals, the team also used the microscope to capture the slow-motion of chemical signals in the mouse brain, such as calcium and glutamate, a neurotransmitter, as deep as one-third of a millimeter from the brain’s surface.

A notable advantage of this technique is the ability to track the signals that do not trigger the neuron to fire – weak neuronal signals (called sub-threshold signals) that are often difficult to capture and detect, which could also happen in many disease condition in the brain, but have yet been studied in detail because of the lack of high-speed technique like the one developed by the team.

Another important feature of the novel technique is that it is minimally invasive. The classical method for recording electrical firing in the brain is to physically embed or implant electrodes in the brain tissue. However, such physical intrusion could cause damage to the neurons, and can only detect fuzzy signals from a couple of neurons.

“This is so far a one-of-its-kind technology that could detect millisecond-changing activities of individual neurons in the living brain. So, this is, I would say, the cornerstone of neuroscience research to more accurately “decoding” brain signals.”Dr Tsia said the team would work to advance the capability of the microscope.

“We are working to further combine other advanced microscopy techniques to achieve imaging at higher resolution, wider view and deeper into the brain in the neocortex, which is about 1 millimeter. This will allow us to probe deeper into the brain for a better and more comprehensive understanding of the functions of the brain.” he added.

Source: The University of Hong Kong