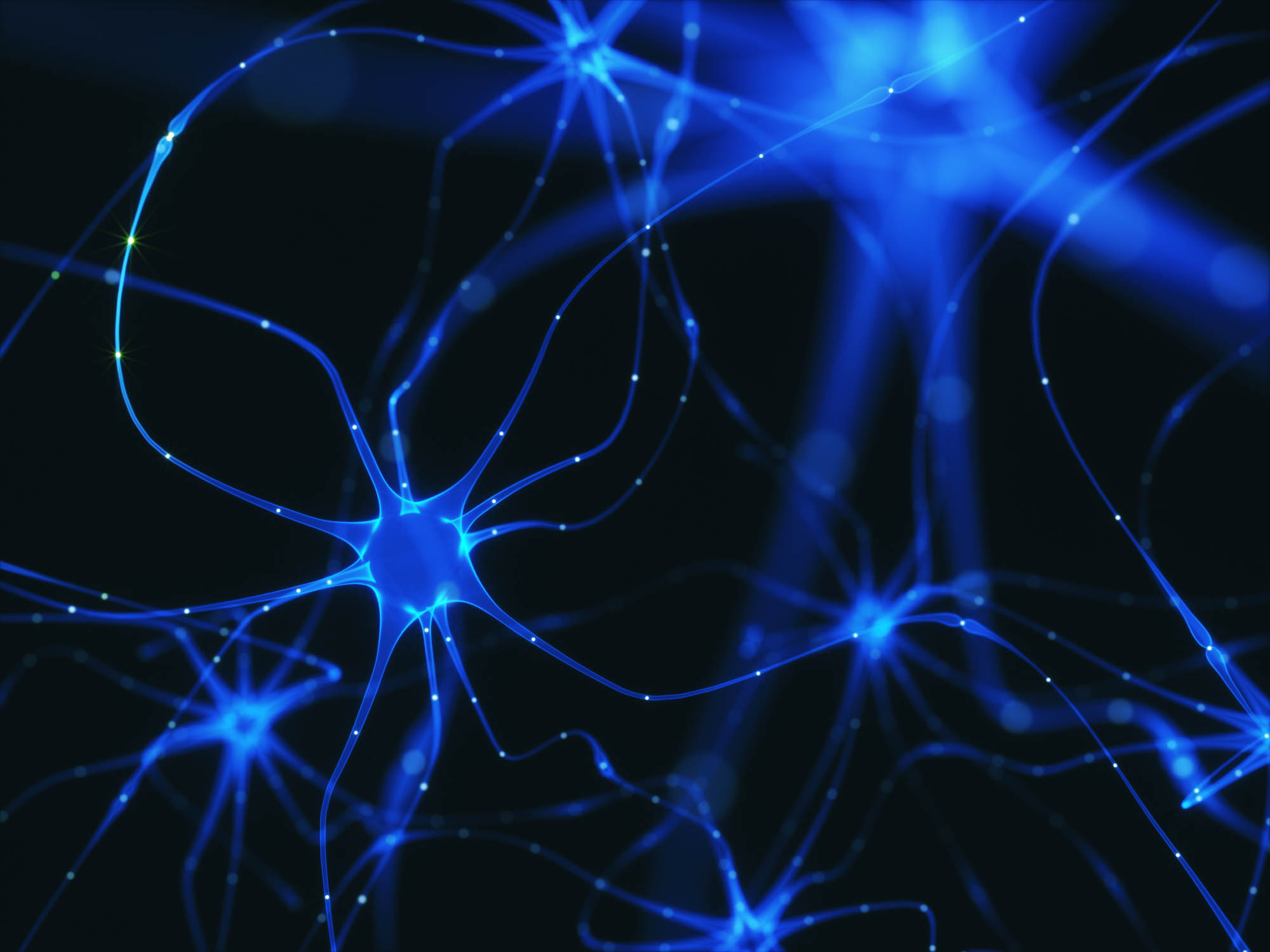 The human brain is composed of billions of neurons wired together in intricate webs and communicating through electrical pulses and chemical signals. Although neuroscientists have made progress in understanding the brain’s many functions—such as regulating sleep, storing memories, and making decisions—visualizing the entire “wiring diagram” of neural connections throughout a brain is not possible using currently available methods. But now, using Drosophila fruit flies, Caltech researchers have developed a method to easily see neural connections and the flow of communications in real time within living flies. The work is a step forward toward creating a map of the entire fly brain’s many connections, which could help scientists understand the neural circuits within human brains as well.

A paper describing the work appears online in the December 12 issue of eLife. The research was done in the laboratory of Caltech research professor Carlos Lois.

“TRACT is a new tool that will allow us to create wiring diagrams of brains and determine the function of connected neurons,”

When two neurons connect, they link together with a structure called a synapse, a space through which one neuron can send and receive electrical and chemical signals to or from another neuron. Even if multiple neurons are very close together, they need synapses to truly communicate.

The Lois laboratory has developed a method for tracing the flow of information across synapses, called TRACT (Transneuronal Control of Transcription). Using genetically engineered Drosophila fruit flies, TRACT allows researchers to observe which neurons are “talking” and which neurons are “listening” by prompting the connected neurons to produce glowing proteins.

With TRACT, when a neuron “talks”—or transmits a chemical or electrical signal across a synapse—it will also produce and send along a fluorescent protein that lights up both the talking neuron and its synapses with a particular color. Any neurons “listening” to the signal receive this protein, which binds to a so-called receptor molecule—genetically built-in by the researchers—on the receiving neuron’s surface. The binding of the signal protein activates the receptor and triggers the neuron it’s attached to in order to produce its own, differently colored fluorescent protein. In this way, communication between neurons becomes visible. Using a type of microscope that can peer through a thin window installed on the fly’s head, the researchers can observe the colorful glow of neural connections in real time as the fly grows, moves, and experiences changes in its environment.

Many neurological and psychiatric conditions, such as autism and schizophrenia, are thought to be caused by altered connections between neurons. Using TRACT, scientists can monitor the neuronal connections in the brains of hundreds of flies each day, allowing them to make comparisons at different stages of development, between the sexes, and in flies that have genetic mutations. Thus, TRACT could be used to determine how different diseases perturb the connections within brain circuits. Additionally, because neural synapses change over time, TRACT allows the monitoring of synapse formation and destruction from day to day. Being able to see how and when neurons form or break synapses will be critical to understanding how the circuits in the brain assemble as the animal grows, and how they fall apart with age or disease.

TRACT can be localized to focus in on the wiring of any particular neural circuit of interest, such as those that control movement, hunger, or vision. Lois and his group tested their method by examining neurons within the well-understood olfactory circuit, the neurons responsible for the sense of smell. Their results confirmed existing data regarding this particular circuit’s wiring diagram. In addition, they examined the circadian circuit, which is responsible for the waking and sleeping cycle, where they detected new possible synaptic connections.

TRACT, however, can do more than produce wiring diagrams. The transgenic flies can be genetically engineered so that the technique prompts receiving neurons to produce proteins that have a function, rather than colorful proteins that simply trace connections. 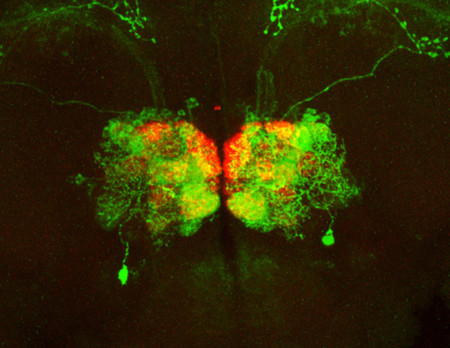 The TRACT method allows for the identification of neurons connected by synapses in a brain circuit. This image shows the olfactory receptor neurons (red) activating the production of a green protein in their synaptically-connected downstream partners.
Credit: Courtesy of the Lois Laboratory

“We could use functional proteins to ask, ‘What happens in the fly if I silence all the neurons that receive input from this one neuron?'” says Lois. “Or, conversely, ‘What happens if I make the neurons that are connected to this neuron hyperactive?’ Our technique not only allows us to create a wiring diagram of the brain, but also to genetically modify the function of neurons in a brain circuit.”

Previous methods for examining neural connections were time consuming and labor intensive, involving thousands of thin slices of a brain reconstructed into a three-dimensional structure. A laboratory using these techniques could only yield a diagram for a single, small piece of fruit-fly brain per year. Additionally, these approaches could not be performed on living animals, making it impossible to see how neurons communicated in real time.

Because the TRACT method is completely genetically encoded, it is ideal for use in laboratory animals such as Drosophila and zebrafish; ultimately, Lois hopes to implement the technique in mice to enable the neural tracing of a mammalian brain. “TRACT is a new tool that will allow us to create wiring diagrams of brains and determine the function of connected neurons,” he says. “This information will provide important clues towards understanding the complex workings of the human brain and its diseases.”