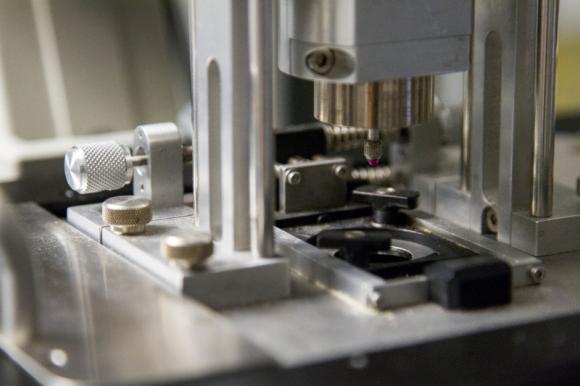 Concussion machine. A device developed by Brown University researchers can deliver compressive impacts to 3-D cultures of brain cells and monitor how the cells react to that trauma in real time. The device could help scientists better understand how traumatic brain injury occurs at the cellular level. Nick Dentamaro / Brown University

With a new $4.75 million grant from the Office of Naval Research, a team of scientists aims to develop new insights into how traumatic injuries form in the brain and develop new helmet technologies to help prevent them.

“The helmets used today on the battlefield and on playing fields are tested against a standard developed in late seventies to prevent skull fractures,” said Christian Franck, the grant’s principal investigator and an associate professor in Brown’s School of Engineering. “We want to update that standard to assess how well a helmet protects the soft tissue inside the skull–the brain–and ultimately develop a prototype helmet that meets our new standard.”

Accomplishing that will require a comprehensive, multi-level understanding of how forces are transmitted from a helmet to the skull, from the skull through the brain and ultimately to the individual neural cells that are damaged during traumatic brain injury (TBI).

Franck will work with Brown colleagues Diane Hoffman-Kim and Haneesh Kesari, as well as researchers from Drexel University, Sandia National Laboratory and Team Wendy, a manufacturer of helmets and helmet liners.

Franck’s lab at Brown has developed a novel technique for measuring the effects of traumatic forces on individual neurons. Most previous research on TBI at the cellular level has been done on two-dimensional petri dishes, but Franck uses a custom-built device that can apply compressive forces to neurons inside three-dimensional cell cultures, while using a powerful microscope to continuously monitor changes in cell structure. Franck has already used the system to gain new insights into how cells respond to traumatic strain. With is new grant, he plans to establish precise force thresholds for the onset of cellular injury.

“We want to know how much force inside the brain is too much for cells,” Franck said. “That gives us a baseline for understanding exactly what kinds of forces are involved in TBI at the cellular level.”

The lab of Hoffman-Kim, an associate professor of medical science and of engineering at Brown, works with mini-brains, or neuron bundles that model basic properties of living brains. The mini-brains offer a more complex cell culture than those Franck has worked with previously, which enables the researchers to better recreate the actual brain environment in which neurons operate.

The information gleaned from the cellular level will be combined with results of studies designed to better understand the forces on a helmeted head generated by typical blunt impacts and blast waves. To do that, the research team will work with Team Wendy to develop a sensor system that can be fitted to existing helmets used in combat and athletics. In 2013, Franck and Team Wendy developed a simple but fully functional impact acceleration measuring combat helmet system, which served as a proof of principle for the current grant.

The team will build upon that initial sensor design, then they’ll use facilities at Drexel and Team Wendy to test the response of helmets to a wide variety of forces, and how those forces are transmitted to the skull.

To complete the picture of how forces transmitted by a helmet are distributed through the brain to individual cells, Franck will work with researchers at Sandia National Laboratory. The Sandia team who has developed models of the head and neck based on thousands of CT scans. Those models are able to provide insights into how forces are transmitted through soft tissue.

Using his laboratory device, Franck has been able to image the process of cell death during TBI.

“We want put all these pieces together from the macroscopic level of helmets to the microscopic level of cells to get a complete picture of how these injuries occur,” Franck said. “Once we have that, we can start to think about new methods of diagnosis and prevention.”

Based on the injury model developed during this project, the researchers aim to deploy a version of their sensor system in combat theaters and playing fields.

“The idea is that when someone experiences a blow to the head, the helmet transmits the force data to a computer,” Franck said. “A first responder could then look at that data and determine if TBI is likely and how severe it might be.”

Ultimately, the team hopes the data generated by the research can be used to devise a new testing standard for helmets and a new helmet prototype. In developing the prototype, Franck will work closely with Team Wendy and his colleague in the School of Engineering, Haseesh Kesari, who studies the mechanical properties of solid materials.

“What’s exciting to me about this is that it spans the microscale to macroscale,” Franck said. “We’re not aware of any other project that has taken such a comprehensive and tightly integrated approach to understanding how to better prevent these kinds of injuries.”