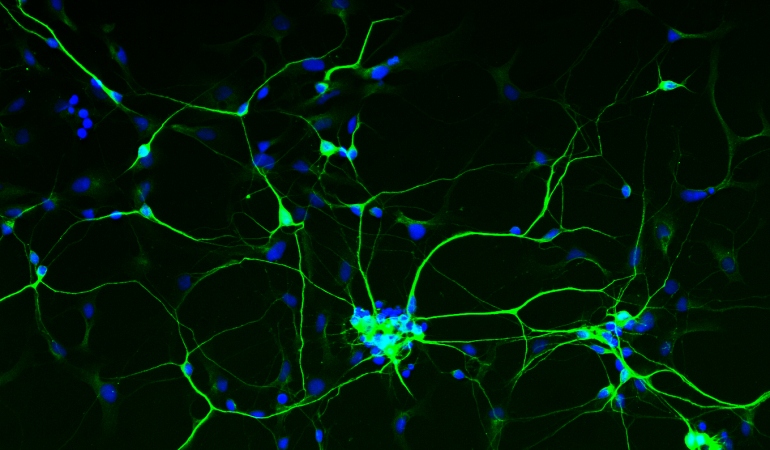 Human neurons that were derived from skin cells. Image by Aditi Deshpande

Researchers at UC San Francisco have developed a new genetic model of autism, using neurons created in the lab from patients’ own skin cells. Their experiments suggest that abnormalities in the electrical firing of neurons may lead to behavioral and developmental symptoms in autism, while differences in neuron size and shape result in abnormalities in brain size that often accompany the disorder.

Scientists in the laboratory of Lauren Weiss, PhD, an associate professor of psychiatry and member of the Institute for Human Genetics at UCSF, looked at genetic mutations that cause either the deletion or duplication of a region of DNA on chromosome 16 that includes 29 genes implicated in important cellular functions in the brain. (Ordinarily, there are two copies of every gene, one on each chromosome, but deletions or duplications result in either one copy or three copies of the genes, respectively.)

In 2008, Weiss discovered that deletion or duplication of this region can result in autism. Epilepsy, psychiatric disorders, and other intellectual disabilities have also been linked to these mutations. In addition, deletion of the region causes macrocephaly — a disproportionately large brain — while duplication results in microcephaly, or an abnormally small brain. Autism is frequently accompanied by abnormal head size, leading to speculation that alterations in brain size could be a factor contributing to the disorder.

In the current study, published online Dec. 8, 2017, in Cell Reports, the researchers wanted to know how seemingly opposite mutations – either removing or adding a copy of the same 29 genes on chromosome 16 – could both result in autism. They also wanted to determine if micro- or macrocephaly could indeed be directly linked to autism.

The researchers obtained skin cells from patients who carried one or the other of the mutations, which they first turned into stem cells and then into brain cells. Neurons with the deletion had significantly larger cell bodies with more and longer branches coming off the cell, while neurons with the duplication had smaller cell bodies and shorter branches. The scientists think that these differences in cell size are behind the differences in overall brain size seen in patients, with deletions corresponding to larger neurons and therefore larger brains, and duplications resulting in smaller neurons and smaller brains.

In addition to changes in cell size, neurons with either a deletion or duplication had fewer synapses – the electrical connections between neurons – than neurons created from people without these mutations. There were also differences in the strength and firing rates of the synapses. The fact that these changes in synapse density and function were the same for patients with either deletions or duplications suggests that these differences may contribute to the autism-related behavioral changes seen in both types of patients.

“Our results suggest that the anatomical symptoms seen in autism may have different origins than the behavioral symptoms, even though they’re caused by the same mutation,” said Aditi Deshpande, PhD, a postdoctoral researcher in the Weiss laboratory and first author on the paper. “Changes in neuron size may cause the differences in brain circumference, while changes in the function of the neuron may be behind the common behavioral symptoms. The next step will be to try to figure out which of the 29 genes are responsible for the different cellular or functional changes.”

A Picture is Starting to Emerge

A related article published by Weiss’s group on Nov. 21, 2017, in Molecular Psychiatry developed a second novel genetic model of autism. The researchers again created neurons from cells donated by patients who carry a genetic mutation, this time in a critical signaling pathway that is necessary in every cell in the body. The mutation causes an extremely rare genetic disease called cardiofaciocutaneous (CFC) syndrome, which is characterized by abnormal development of the heart, facial features, skin and hair. In addition, previous research by Weiss revealed that people with this condition have a heightened risk for autism.

In the new paper, a team led by Weiss lab postdoctoral researcher Erika Yeh, PhD, found that the CFC mutation caused neural progenitor cells – early stage neurons that can develop into all different types of brain cells – to develop prematurely. The cells left the progenitor stage too early, which threw off the normal ratio of different types of brain cells. Specifically, the mutation resulted in a surplus of early-developing cells, such as inhibitory neurons and some types of excitatory neurons, and a dearth of cells that take longer to develop, such as astrocytes, the primary support cells in the brain.

Notably, the scientists again observed a difference in the size and function of neurons with the mutation. Excitatory neurons were larger and more complex with more branches coming off, while inhibitory neurons were smaller and had fewer branches. That the same mutation caused opposite effects in two different types of neurons surprised Weiss’s team, and led them to speculate that these changes may be behind some of the behavioral symptoms seen in the disorder, particularly because autism and epilepsy have long been thought to stem in part from an imbalance in excitatory and inhibitory activity in the brain.

“For something as behaviorally complex and hard to quantify as autism, when we look at all the different genetic models that have been tested, I think a picture is starting to emerge with some similarities, like decreased synaptic density and differences in cell size,” Weiss said. “That gives us hope that even though autism is made up of a lot of different genetic risk factors, there may be some common neurological changes that can lead to common treatments.”