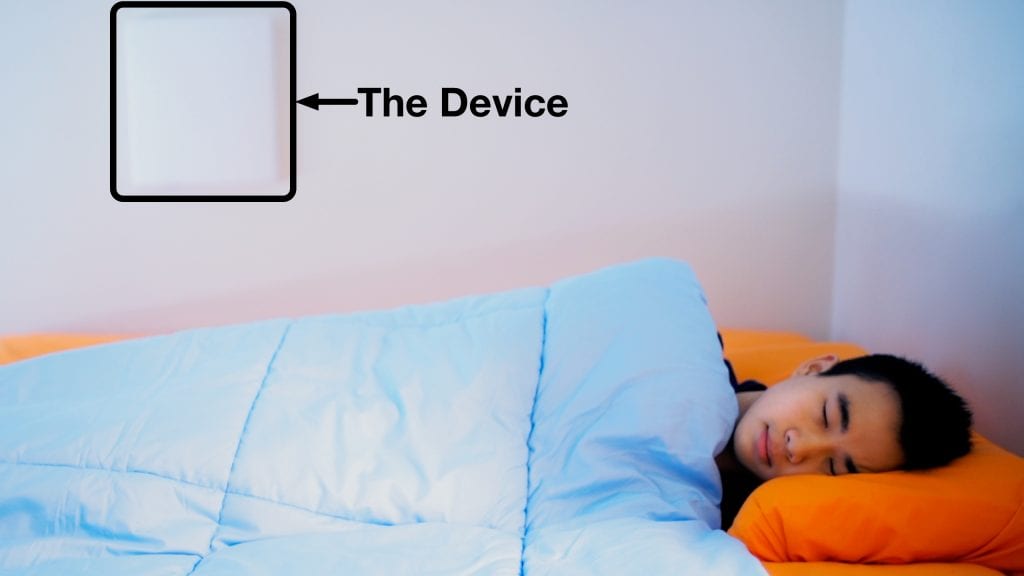 The sensors consist of a wireless device, about the size of a laptop computer, that emits low-power radio frequency (RF) signals. As the radio waves reflect off of the body, any slight movement of the body alters the frequency of the reflected waves. Analyzing those waves can reveal vital signs such as pulse and breathing rate. Image: Shichao Yue

More than 50 million Americans suffer from sleep disorders, and diseases including Parkinson’s and Alzheimer’s can also disrupt sleep. Diagnosing and monitoring these conditions usually requires attaching electrodes and a variety of other sensors to patients, which can further disrupt their sleep.

To make it easier to diagnose and study sleep problems, researchers at MIT and Massachusetts General Hospital have devised a new way to monitor sleep stages without sensors attached to the body. Their device uses an advanced artificial intelligence algorithm to analyze the radio signals around the person and translate those measurements into sleep stages: light, deep, or rapid eye movement (REM).

“Imagine if your Wi-Fi router knows when you are dreaming, and can monitor whether you are having enough deep sleep, which is necessary for memory consolidation,” says Dina Katabi, the Andrew and Erna Viterbi Professor of Electrical Engineering and Computer Science, who led the study. “Our vision is developing health sensors that will disappear into the background and capture physiological signals and important health metrics, without asking the user to change her behavior in any way.”

Katabi worked on the study with Matt Bianchi, chief of the Division of Sleep Medicine at MGH, and Tommi Jaakkola, the Thomas Siebel Professor of Electrical Engineering and Computer Science and a member of the Institute for Data, Systems, and Society at MIT. Mingmin Zhao, an MIT graduate student, is the paper’s first author, and Shichao Yue, another MIT graduate student, is also a co-author.

The researchers will present their paper at the International Conference on Machine Learning on Aug. 9.

Katabi and members of her group in MIT’s Computer Science and Artificial Intelligence Laboratory have previously developed radio-based sensors that enable them to remotely measure vital signs and behaviors that can be indicators of health. These sensors consist of a wireless device, about the size of a laptop computer, that emits low-power radio frequency (RF) signals. As the radio waves reflect off of the body, any slight movement of the body alters the frequency of the reflected waves. Analyzing those waves can reveal vital signs such as pulse and breathing rate.

“It’s a smart Wi-Fi-like box that sits in the home and analyzes these reflections and discovers all of these changes in the body, through a signature that the body leaves on the RF signal,” Katabi says.

Katabi and her students have also used this approach to create a sensor called WiGait that can measure walking speed using wireless signals, which could help doctors predict cognitive decline, falls, certain cardiac or pulmonary diseases, or other health problems.

After developing those sensors, Katabi thought that a similar approach could also be useful for monitoring sleep, which is currently done while patients spend the night in a sleep lab hooked up to monitors such as electroencephalography (EEG) machines.

“The opportunity is very big because we don’t understand sleep well, and a high fraction of the population has sleep problems,” says Zhao. “We have this technology that, if we can make it work, can move us from a world where we do sleep studies once every few months in the sleep lab to continuous sleep studies in the home.”

To achieve that, the researchers had to come up with a way to translate their measurements of pulse, breathing rate, and movement into sleep stages. Recent advances in artificial intelligence have made it possible to train computer algorithms known as deep neural networks to extract and analyze information from complex datasets, such as the radio signals obtained from the researchers’ sensor. However, these signals have a great deal of information that is irrelevant to sleep and can be confusing to existing algorithms. The MIT researchers had to come up with a new AI algorithm based on deep neural networks, which eliminates the irrelevant information.

“The surrounding conditions introduce a lot of unwanted variation in what you measure. The novelty lies in preserving the sleep signal while removing the rest,” says Jaakkola. Their algorithm can be used in different locations and with different people, without any calibration.

Using this approach in tests of 25 healthy volunteers, the researchers found that their technique was about 80 percent accurate, which is comparable to the accuracy of ratings determined by sleep specialists based on EEG measurements.

“Our device allows you not only to remove all of these sensors that you put on the person, and make it a much better experience that can be done at home, it also makes the job of the doctor and the sleep technologist much easier,” Katabi says. “They don’t have to go through the data and manually label it.” 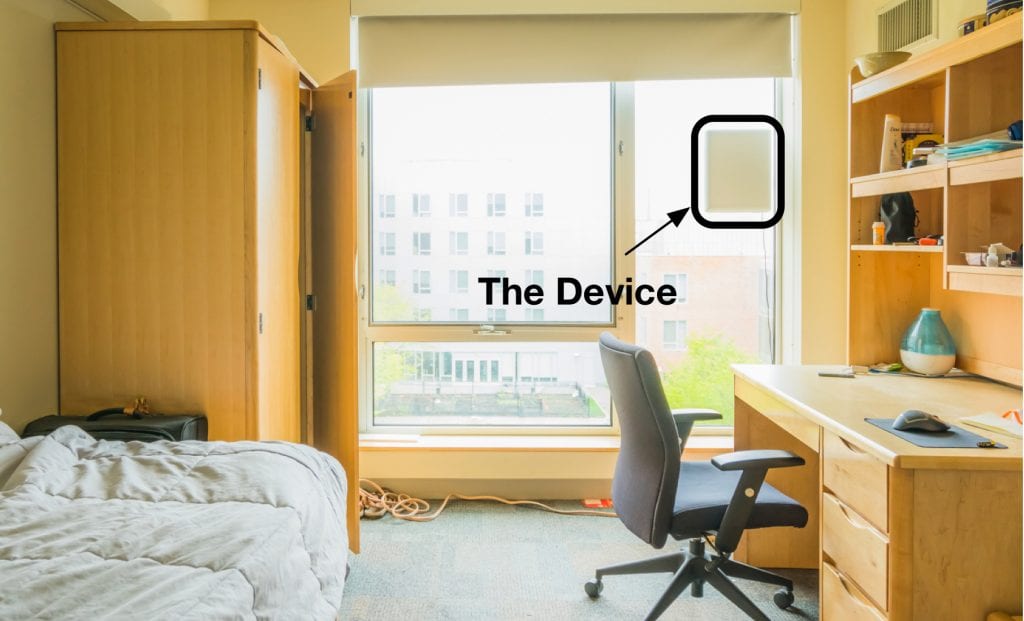 “Our vision is developing health sensors that will disappear into the background and capture physiological signals and important health metrics, without asking the user to change her behavior in any way,” says professor Dina Katabi. Image: Shichao Yue

Other researchers have tried to use radio signals to monitor sleep, but these systems are accurate only 65 percent of the time and mainly determine whether a person is awake or asleep, not what sleep stage they are in. Katabi and her colleagues were able to improve on that by training their algorithm to ignore wireless signals that bounce off of other objects in the room and include only data reflected from the sleeping person.

The researchers now plan to use this technology to study how Parkinson’s disease affects sleep.

“When you think about Parkinson’s, you think about it as a movement disorder, but the disease is also associated with very complex sleep deficiencies, which are not very well understood,” Katabi says.

The sensor could also be used to learn more about sleep changes produced by Alzheimer’s disease, as well as sleep disorders such as insomnia and sleep apnea. It may also be useful for studying epileptic seizures that happen during sleep, which are usually difficult to detect.