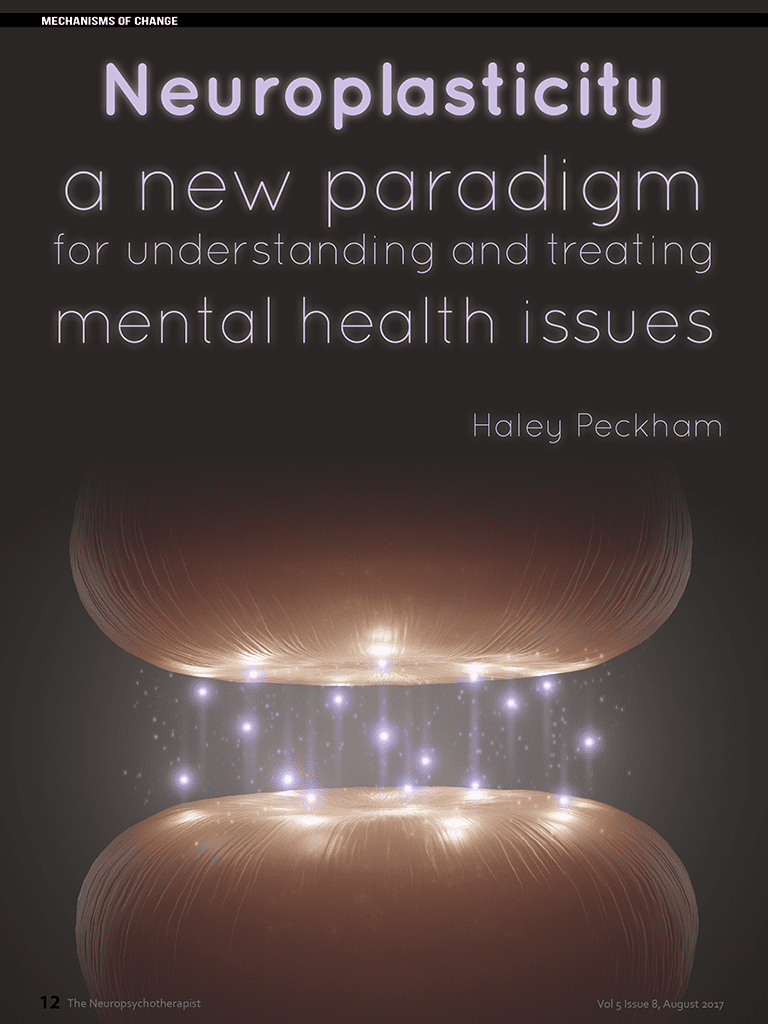 The dominant paradigm for understanding and treating mental health issues is the medical model. The medical model is rooted in science. Broadly speaking, it assumes and seeks to identify pathology in the brain and, through basic research and subsequent high quality clinical trials, find pharmacological treatments or biomedical interventions that will cure or at least alleviate symptoms of the mental illness.

This biomedical approach provides a diagnosis of an illness, which may be experienced as a relief by the consumer. The provision of a diagnosis endorses the illness. Certain assumptions also attend the idea of illness—such as it not being within someone’s capacity to control and the symptoms not being due to failings or weaknesses in aspects of their character. Essentially we do not hold people responsible for their being ill—becoming mentally unwell is generally regarded as a misfortune that could happen to anyone. This framing of mental health issues as illnesses also frames a compassionate response that is sympathetic to the consumer’s unfortunate circumstance of being ill or unwell. There is a further assumption that the identification of, and belief in, the illness would ideally prevent the consumer from being oppressed by harsh and unfair judgements, for example, as being “weak-willed”, “bad” or “inadequate” for the thoughts and behaviours that may arise as a consequence of the mental illness. Indeed, where crimes have been committed, we seek to determine whether the defendant has a mental illness that would have impaired their awareness that they were committing a crime, their ability to distinguish right from wrong, and their capacity to control their actions. We feel as a society that it is wrong to punish people who aren’t well and therefore cannot be held responsible for their actions.

The provision of a diagnosis has a flip side too. At times consumers may experience their diagnosis as disempowering: being relieved of responsibility also means being relieved of autonomy—you cannot choose not to be ill. In addition, the swift assumption that illness is a misfortune, followed by a swift diagnosis, forecloses exploration of the consumer’s life story and current circumstance and excludes the chance of discovering any meaning or aetiology through exploration of the specific distress and suffering that is being (and has been) experienced. Such explorations take time, and any meaning or aetiology may only be revealed in contexts that already assume there is meaning to be found in distress and suffering, or “symptoms”. The medical model focuses on brain more than mind, and more on pathology and treatment than narratives and experiences of the past and present.

The study of mind and brain is fraught with dichotomies: dualism or reductionism, nature or nurture, mad or bad. The medical model is scientific and reductionist. It offers no clear way to reconcile the rich life and story of a consumer—their own experience of their life and mind—with the pathology of their illness or its treatment. Similarly, the medical model tends to focus more on nature and genes, than on nurture, our lived experience; indeed, trying to find candidate risk genes for many mental illnesses occupies many research laboratories, although an increasing amount of research is being done on the interplay between genes and the environment. Lastly, within the medical model, the dichotomy of mad or bad necessarily distils into irreconcilable territories of “ill and not culpable” or “not ill and therefore culpable”.

I am introducing neuroplasticity as a new paradigm for understanding and treating mental health issues. At its simplest, neuroplasticity refers to the capacity that neural systems have to mould or adapt. Neuroplasticity is the ability of the brain to be meaningfully, biologically changed by experience. The brain is made up of a dynamic network of around 86 billion neurons, making it the most complex machine in the universe, and its capacity to learn and adapt is both ordinary to us and taken for granted—and breathtakingly awesome when we actually stop to consider it. Neuroplasticity includes our capacity to learn and remember what we need and use, as well as our capacity to forget what we don’t. Learning and adaptation occur at conscious and non-conscious levels: examples of these are intentional learning and implicit memory.

A study of neuroplasticity reveals that the brain is shaped structurally and functionally by experiences in ways that are meaningful. The brain is plastic throughout development (and beyond), and so at every stage of maturation our experiences in the world impact on our developmental trajectory. Nature assumes that the experiences of our future will be similar to the experiences of our past. This means our earliest experiences calibrate our neural regulatory systems based on what has happened to us, so we are prepared for and can anticipate what is likely to happen to us, and thereby increase our chances of survival long enough to successfully reproduce. Evolution only cares that we survive long enough to continue our genetic line. Our early relationships and the ways we are cared for are the most profound influences on the structure and function of the brain and our developmental path. Whether we grow up in fear or in safety, our systems are organised around those experiences to anticipate more of the same, and this is a survival-positive strategy.

With the three dichotomies in mind—dualism or reductionism, nature or nurture, mad or bad—the paradigm of neuroplasticity, like the medical model, is scientific and reductionist. Used in this context, the word “reductionist” does not seem appropriate because rather than our stories and traumas (our sense of ourselves and our struggles) being reduced to biology, neuroplasticity elevates biology. Neuroplasticity shows us that our biology is breathtakingly complex, and more intricate and elegant than we have recognised. Like the exquisitely complex Romanesco broccoli that grows in a fractal, the unique patterns of snowflakes, and the perfect spirals of the unfurling fern (all of which are uncontroversially biological), we too are exquisitely complex. And in ways that we are only beginning to glimpse, our complexity is furthered by our stories of interactions with the world, our experiences of the environment, our loves and losses, all of which leave biological traces from the beginning to the end of our lives. The paradigm of neuroplasticity may be reductionist, but it is a poor and misleading word to describe the extraordinary ways in which our biology is intricately and beautifully sculpted by our lives.Whereas the medical model focuses more strongly on nature rather than nurture, neuroplasticity concerns itself with the interface of nature and nurture, and so the dichotomy is exposed as false! Experience leaves traces on our genes: it alters how many new neurons are born and which will survive, it shapes our neural pathways, and it determines if those pathways will become highways. Experience shapes our brains profoundly, from the level of the DNA to the connections between regions of our brains. Experience also steers us towards trajectories where, once we are on them, we may be judged as mad or bad. It’s a challenging thought, but experience may well determine our level of responsibility—our genuine capacity to be able to respond rather than react.

Above all, neuroplasticity validates our experiences as meaningful and profound influences on the genetic hand we have been dealt and thereby offers us a scientific and compassionate stance. The way we are is in very large part a result of what has happened to us, our experiences in combination with our nature (our genes). However, the very definition of neuroplasticity shows us that acceptance of circumstance does not have to be the end of the story. If experiences have shaped us in ways that currently cause distress (both to ourselves and to others in our lives), what experiences could change us to have better lives? What experiences might we need?

Mechanisms of Neuroplasticity
Neuroplasticity refers to the capacity that neural systems have to adapt to experience. Lived experience shapes our biology in meaningful ways that help us adapt to that experience so that we are better prepared next time it (or something similar) happens. Neuroplasticity serves evolution by helping us adapt to our environment, even picking the best strategy for reproduction within that environment so that our genetic line will be continued. Mechanisms of neuroplasticity have been selected by evolution because they are survival positive. In the following sections I introduce four of these mechanisms: epigenetics, neurogenesis, synaptic plasticity, and white matter plasticity.

Epigenetics
Epigenetics (literally meaning “above the gene”) is a field of study that examines experiences that result in changes to gene expression. Two ways this occurs is by small chemical groups becoming attached either to the DNA itself or to the core proteins that the DNA coils around. These small chemical groups make the gene more or less accessible. Lived experience cannot add or take away genes but it can add or remove these chemical tags. The addition of these small chemical groups acts as a kind of volume control over the gene. The gene may be silenced (i.e., made inaccessible) so it is no longer transcribed at all, or it may be turned up or down. Adjusting the “volume” of a gene really means regulating the rate of transcription of the gene—in other words regulating how many copies of that gene are made, copies that can then be made into protein. The epigenetic marks on genes may persist from moments to a lifetime, and since the pattern of epigenetic marks is copied alongside the DNA it may persist into the next generation. Hence the experiences that leave marks on your genes to help you adapt and survive in your environment may be inherited by your children, because nature assumes that your children will face similar challenges in a similar environment to the ones you have faced, and so nature gives them a head start.

To recap, the positive experience of licking and grooming is adaptive for rat pups because it promotes production of glucocorticoid receptors so their stress response can be more efficiently terminated; this is okay because they have a sensitive, attentive and available mother to nurture and protect them.

Conversely, the negative experience of low levels of licking and grooming is also adaptive because the stress response itself helps the rat pups survive. In this case, however, it is not so readily turned off so the survival advantage conferred by the activated stress system persists and perhaps compensates for the absence of a sensitive, attentive and available mother.

The intergenerational effects of trauma in humans have been studied by Rachel Yahuda. In one study, she examined how a mother’s experience of trauma leading to a diagnosis of PTSD may transfer to her children as an increased risk for PTSD (Yehuda, Bell, Bierer, & Schmeidler, 2008). This does not sound adaptive at all until you consider that the symptoms of PTSD, including anxiety, hypervigilance, and insomnia, are all adaptive strategies to try and remain safe in case something else traumatic occurs. Nature perhaps assumes that the mother’s children will be born into an environment that is dangerous and prepares them for survival in advance by enhancing the expression of genes that contribute to anxiety and hypervigilant behaviours. The intergenerational transmission of stress is fully discussed in a recent review by Bowers and Yehuda (2016) published in the journal Neuropsychopharmacology.

This has been an excerpt from Neuralplasticity: A new paradigm for understanding and treating mental health issues in the 21st Century by Haley Peckham. For more excellent material for the psychotherapist, please subscribe to our monthly magazine.