Changing Patterns in the Traumatized Brain 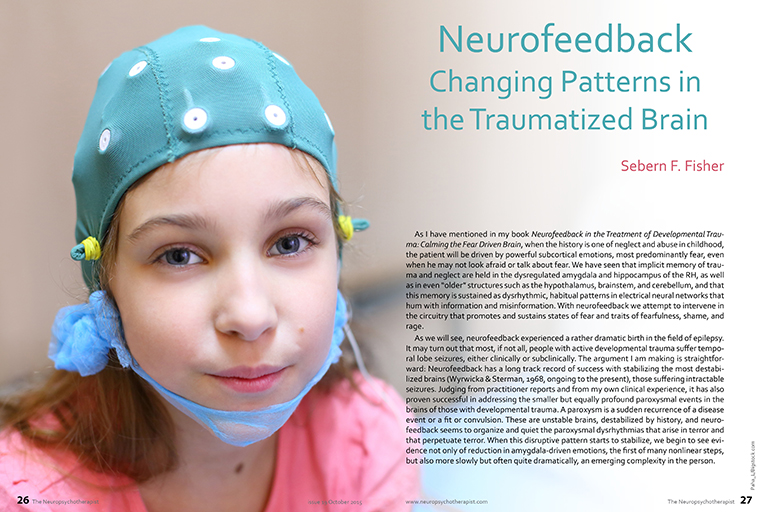 Read the full article as part of a trauma article download bundle here: [wlm_private “NPT Basic|3 Year Subscription|Standard Membership|Staff|NPT Premium|Standard Monthly”] Members use this link to get the download for free. [/wlm_private]

As I have mentioned in my book Neurofeedback in the Treatment of Developmental Trauma: Calming the Fear Driven Brain, when the history is one of neglect and abuse in childhood, the patient will be driven by powerful subcortical emotions, most predominantly fear, even when he may not look afraid or talk about fear. We have seen that implicit memory of trauma and neglect are held in the dysregulated amygdala and hippocampus of the RH, as well as in even “older” structures such as the hypothalamus, brainstem, and cerebellum, and that this memory is sustained as dysrhythmic, habitual patterns in electrical neural networks that hum with information and misinformation. With neurofeedback we attempt to intervene in the circuitry that promotes and sustains states of fear and traits of fearfulness, shame, and rage.

As we will see, neurofeedback experienced a rather dramatic birth in the field of epilepsy. It may turn out that most, if not all, people with active developmental trauma suffer temporal lobe seizures, either clinically or subclinically. The argument I am making is straightforward: Neurofeedback has a long track record of success with stabilizing the most destabilized brains (Wyrwicka & Sterman, 1968, ongoing to the present), those suffering intractable seizures. Judging from practitioner reports and from my own clinical experience, it has also proven successful in addressing the smaller but equally profound paroxysmal events in the brains of those with developmental trauma. A paroxysm is a sudden recurrence of a disease event or a fit or convulsion. These are unstable brains, destabilized by history, and neurofeedback seems to organize and quiet the paroxysmal dysrhythmias that arise in terror and that perpetuate terror. When this disruptive pattern starts to stabilize, we begin to see evidence not only of reduction in amygdala-driven emotions, the first of many nonlinear steps, but also more slowly but often quite dramatically, an emerging complexity in the person...

Does neurofeedback only work with children or can it be used with adults as well.

Certainly with adults as well. The adult brain is very adaptive to neurofeedback (as it is with other interventions as well) and can respond well to this sort of treatment. You just need the right protocol and therapist who knows what they are doing.