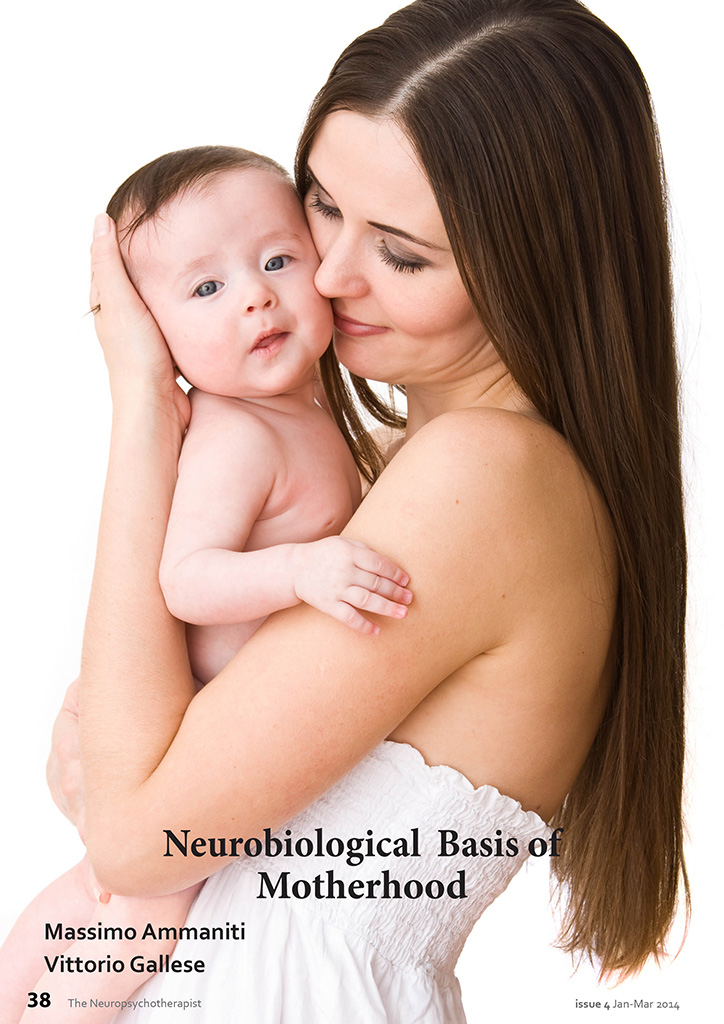 Along with the psychological transformations that take place during pregnancy and in the first year of the baby’s life, striking changes occur in the mother’s brain with the activation of maternal care circuits (Panksepp, 1998).  The fundamental modifications that characterize the transformation from female brain into maternal brain are initiated by pregnancy hormones–gene interactions.  The activated brain circuits promote nurturant and caregiving behavior toward offspring in mothers and less frequently and in a reduced way in fathers; this is understandable because the mammalian female brain is preadapted to care for the offspring.

As has been illustrated by Panksepp (1998), during pregnancy estrogens re- main at modest levels and rapidly increase as delivery nears, while progesterone is high and decreases at the end of pregnancy and prolactin rises consistently (figure 5.1). In addition to these hormones secreted during pregnancy, other bio- chemical factors affecting the nervous system can intervene in triggering the mother’s attitudes.

In this regard, Gintzler (1980) has reported an activation of the endorphin system, the intrinsic mechanism that modulates responsiveness to aversive and painful stimuli connected with the pituitary gland and the hypothalamus over the course of a rat’s pregnancy, especially just before birth. In addition to prepar- ing the mother for the pains of delivery, the endorphins may initiate maternal behavior. It is now sufficiently documented that the rise and the regulation of the maternal behavior requires the coordination of many hormonal and neurochem- ical systems and that the female brain is particularly sensitive to the biochemical changes that occur during pregnancy.

A special role in maternal caregiving onset is performed by oxytocin (OT), the neuropeptide hormone whose increased secretion emerges in the context of physiological and hormonal modifications related to pregnancy. OT not only stimulates uterine contractions during delivery and milk let-down but also pro- motes maternal and protective caregiving behavior (Insel & Young, 2001).

In animal models the connection among OT, early maternal environment, and the emergence of parenting behavior has been studied. It has been evi- denced that OT greatly influences processes of parent–infant bonding in a range of mammalian species, including rats, prairie voles, and primates (Kendrick, Keverne, & Baldwin, 1987; Maestripieri, Hoffman, Anderson, Carter, & Higley, 2009; Neumann, 2008). Several specific brain areas are involved in the initiation and maintenance of maternal pup–directed behavior. Lesion studies have docu- mented and indirectly confirmed that the medial preoptic areas (MPOAs), lo- cated in the rostral hypothalamus, and their connections with the mesolimbic dopamine system for reward processing, play a critical role in maternal attitude (Numan & Insel, 2003; Swain et al., 2004). The thalamus, parietal cortex, and

brain stem also perform an important role in the processing of infant-related so- matosensory information, such as smell, touch, and vocalizations (Xerri, Stern,

& Merzenich, 1994). In this context the prefrontal cortex has a special role in integrating this information and monitoring parental behavior (Afonso, Sison, Lovic, & Fleming, 2007).

A study performed in female voles (Wang, Liu, Young, & Insel, 2000) has evi- denced that hypothalamic OT gene expression and receptor binding increase during the postpartum period. And another study has confirmed that OT may be secreted in rats from parvocellular paraventricular nucleus neurons and the medial preoptic area, both hypothalamic regions mediating maternal behavior (Douglas & Meddle, 2008).

Early social experiences influence the oxytocinergic system, connected with maternal behavior and the formation of affiliative bonds (Champagne et al., 2008; Meaney, 2001); in this regard individual differences have been evidenced in the OT receptors of female pups. These receptors are influenced by different early maternal behaviors (like licking or grooming, etc.) that the pups receive during infancy, and that they later reproduce as mothers to their offspring (Meaney, 2001).

These data highlight the role of OT in the intergenerational transmission of attachment, further confirmed by another study (Francis, Diorio, Liu, & Meaney, 1999; Francis, Young, Meaney, & Insel, 2002) that has evidenced that female rat pups more cared for by their mothers, in the form of high degree of licking and grooming (HLG), are more likely to manifest HLG behavior to their own pups. On the contrary, the female offspring of mothers who have provided low levels of licking and grooming (LLG) manifest a similar pattern of LLG behavior when they too become mothers. Furthermore, the adult offspring of the LLG mothers have shown lower levels of glucocorticoid receptor gene expression and de- creased synaptic density in the hippocampus (Kaffman & Meaney, 2007).

& Bowen, 1995; Wynne-Edwards, 2001). These animal studies evidence that OT is associated with more adequate parental behavior (Gordon, Zagoor-Sharon, Leckman, & Feldman, 2010), while on the contrary the secretion of cortisol is associated with lower levels of maternal behavior.

It has been demonstrated in humans as well that OT, tested only peripheri- cally, is associated with empathy, intimacy, trust (Grewen, Girdler, Amico, & Light, 2005), and capacity to read mental states of others (Domes, Heinrichs, Michel, Berger, & Herpertz, 2007), while an alteration of OT metabolism has been evidenced in neglecting parents (Fries, Ziegler, Kurian, Jcoris, & Pollak, 2005). Maternal touch of the infant and breast contact with his or her mouth in the postnatal period can stimulate OT release in mothers (Matthiesen, Ransjo- Arvidson, Nissen, & Uvnas-Moberg, 2001). In a study by Feldman, Weller, Zagoory-Sharon, and Levine (2007), plasma levels of OT and cortisol were measured in women during the first trimester and last trimester of pregnancy and first postpartum months. At the same time maternal bonding was assessed by studying both maternal behavior and mental representations. The study evidenced that maternal OT across pregnancy and the postpartum period is associated with more competent maternal behavior and adequate mental representations. OT levels are consistent across pregnancy, and initial levels of OT predict postpar- tum bonding behavior, as well as maternal mental representations of bonding. OT is also associated with a pleasurable maternal feeling of bonding and attach- ment representations, but not with anxious and preoccupied thoughts. Such ob- servations could further confirm the hypothesis that OT could intervene, reducing anxiety and favoring quiet states and pleasurable and highly regarded recognition of attachment (Uvnas-Moberg, 1998).

An interesting article by Swain and colleagues (2008) illustrates a research study that has compared mothers who had a vaginal delivery (VD) with mothers who had a caesarean delivery (CD) in order to test the hypothesis that VD moth- ers are significantly more responsive to their own baby’s cry at 2–4 weeks after the delivery. The results of the research confirm the hypothesis that VD mothers are more sensitive to their own baby’s cry than CD mothers during early postpartum in sensory processing, empathy, and motivation.

It is important to note that at 2–4 weeks postpartum, the effects of mode of delivery on brain reaction to a mother’s own baby’s cry are significant. The com- plex biopsychosocial differences observed in VD versus CD may be explained through different mechanisms, suggesting, as has been already evidenced in ani- mal models, an increased release of oxytocin connected with the vagino-cervical stimulation by the baby during VD (Kendrick, 2000). These observations are relevant because they confirm the importance of the natural VD for maternal functioning, whereas in the current US health care system, there is an overuse of caesarean delivery.

Although fathers do not experience pregnancy, birth, or lactation, a similar neuroendocrine trend has been found in the development of fathering and mothering attitudes in mammals (Wynne-Edwards & Timonin, 2007). The links between OT and the mesolimbic dopaminergic pathways in animal monoga- mous fathers suggest that OT influences paternal reward system through attach- ment-related stimuli from partner and child (Young, Lim, Gingrich, & Insel, 2001). In several biparental species, fathers exhibit parenting behavior similar to mothers (Ahern & Young, 2009; Bredy, Lee, Meaney, & Brown, 2004; Frazier, Trainor, Cravens, Whitney, & Marler, 2006), yet they manifest a specific paren- tal interaction. In fact, monogamous mothers and fathers, after separation from their pups, manifest an increase of their parenting behavior in a different way: Mothers engage in licking and physical contact with pups, while fathers provide tactile stimulation and support exploratory behavior (Lonstein & De Vries, 1999). Thus, whereas hormones associated with birth, lactation, and affectionate closeness may induce hormonal changes in mothers, the neuroendocrine basis of fathering is influenced by tactile stimulation of the pup and active promotion of pup behavior such as exploration. Fathers have shown an increase in plasma OT during pregnancy (Gubernick et al., 1995), and the amount of paternal care is associated with OT (Ziegler, 2000).

Studies on the oxytocinergic system of fathering in humans are quite limited, and the mechanisms connected with paternal behavior are not yet clarified. Father–child interactions in humans are also characterized by a more physi- cal stimulatory play, which is highly rewarding and increases the father and child’s positive activation (Feldman, 2003). A recent study by Feldman, Gordon, Schneiderman, Weisman, and Zagoory-Sharon (2010), has evidenced the in- volvement of the oxytocinergic system in human mothering and fathering with a quite similar pattern which has been observed in other mammals.

OT is not the only neurotransmitter that plays a role in the initiation of paren- tal affiliative bonds; other neurotransmitters have been found to be involved in maternal responsiveness. In animal studies, serotonergic gene expression and dopamine-related and GABA-related genes are upregulated in mother rats com- pared to nonmothers (Kinsley & Armory-Meyer, 2011).

Download all this issues at our Academy site. [wlm_private "NPT Basic|3 Year Subscription|Standard Membership|Staff|NPT Premium|Standard Monthly"] Members get your downloads for free by clicking HERE. [/wlm_private]