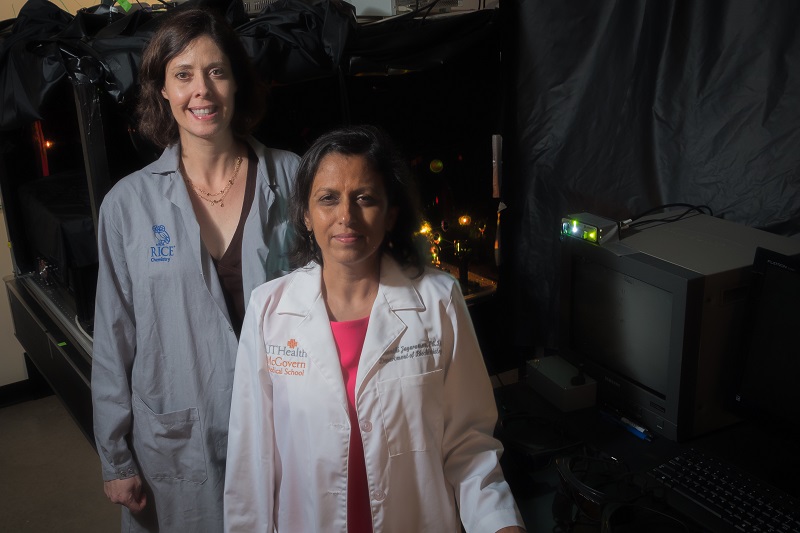 The ability to track the movements of single molecules has revealed how proteins on the surface of nerve cells control gates that turn chemical signals into electrical signals. The finding is a step forward in detailing mechanisms involved in neurological disease, according to researchers at Rice University and the University of Texas Health Science Center at Houston (UTHealth).

Using sophisticated imaging and statistical methods, the scientists employed single-molecule FRET imaging techniques to establish a beachhead at the NMDA receptor gate that, when activated, allows ions to flow through the nerve cell’s membrane.

FRET stands for Förster resonance energy transfer. It is a way to use the light emitted by two fluorescent-tagged molecules as a sensitive ruler for very small distances, such as the opening in the NMDA receptor channel.

Rice chemist Christy Landes, an expert in single-molecule FRET, and Vasanthi Jayaraman, a professor of biochemistry and molecular biology at UTHealth’s McGovern Medical School, whose expertise is in NMDA receptor biochemistry, teamed to gather the first experimental evidence detailing the dynamics of how the receptors alter their shapes to control the sensitivity of the gate to chemical signals. The new study appears in Nature Chemical Biology.

The NMDA receptor is set of four protein subunits, each with four domains, and each of those domains has a particular function. Collectively, they span the cell membrane. Each subunit can have many “states,” or shapes, that regulate which electrical signals — and how many of them — pass through. The subunits sit on each side of the channel and activate when they bind both glutamate and glycine neurotransmitter ligands and trigger the signaling pathway that allows positively charged ions to pass into the cell.

“These receptors are critical for normal physiological function,” Jayaraman said. “A lot of times you may not want to turn signaling on or off. You may want to dial in the extent of signaling. Once we understand all the protein’s states, we can start thinking about ways to do this, thus keeping the protein active but to varying degrees as needed.

“It’s important for drug development to understand these dynamics because the motions and the energetic properties of these proteins dictate their specific functions,” she said. “We were able to do both.”

This knowledge could lead to multifunctional drugs that influence the channels in subtle ways, Landes said. Known NMDA receptor antagonists include common anesthetics, synthetic opioids like methadone and dissociative drugs like ketamine and nitrous oxide. Depressed NMDA receptor function is suspected in memory deficits commonly associated with aging. Alcohol is known to inhibit glutamate, one of two neurotransmitters that bind to NMDA.

“A lot of drug design has as its core principle that there’s one way to bind, and you basically either turn something on or turn something off,” Landes said. “But it’s obvious that this type of receptor protein isn’t just on or off. There are multiple conformational interactions that either improve or degrade the signaling.”

In an earlier study, the team analyzed the conformations of a smaller and simpler but related system, the C-clamp-like agonist binding domain of another receptor, AMPA. AMPA mediates fast signal transmission in the central nervous system. The single-molecule FRET technique allowed the researchers to get the first snapshots of the AMPA protein’s various clamp conformations at rest and also when bound to a range of target molecules by measuring the distance between two light-activated molecular tags.

This time, the researchers sought to understand the channel opening itself — how the proteins that make up the NMDA receptor channel move to activate the ion gate. By adding fluorescent tags across the channel and sampling them over time, they were able to map the energy landscape of the transmembrane segment of the protein in its resting state or under the influence of ligands that modulate the gate among open, closed and intermediate states. Each channel’s structural state directly influences the electrical signals that are allowed to pass.

They discovered that the agonist-free (resting) state is structurally stiff, which confirmed its energetic resistance to adopting conformations that would allow channel opening. Agonists like glutamate are the target chemicals that trigger electrical signal transport through the channel. The researchers confirmed that in the presence of the primary agonist, the NMDA channel was less stiff and therefore able to transition more easily among the possible channel-open conformations.

The work also showed how two modulators known to interact with different parts of the full receptor impact channel conformation and stiffness. Zinc ions, despite binding to the extracellular portion of the receptor far away from the channel, induce a stiff channel with significant energetic barriers to opening, similar to the receptor’s resting state. In contrast, the “pore blocker” dizocilpine was found to enhance the energetics of transitions among multiple conformations that don’t relate to channel opening.

Landes said that rather than capture static states, as is typically done with X-rays, “We were looking at distance changes across the channel in a dynamic fashion. It’s much more complicated.” That gave them a dataset more akin to a movie than a snapshot, she said.

She said the study required new techniques to purify and stabilize the full proteins, which were drawn from the neurons of rodents. “There were three key pieces to this project: handling the full proteins, getting them purified and labeled on the single-receptor level and performing the data analysis to find out what it means.

“That’s truly the foundation here,” she said. “Now we can do these measurements for much more complicated systems.”