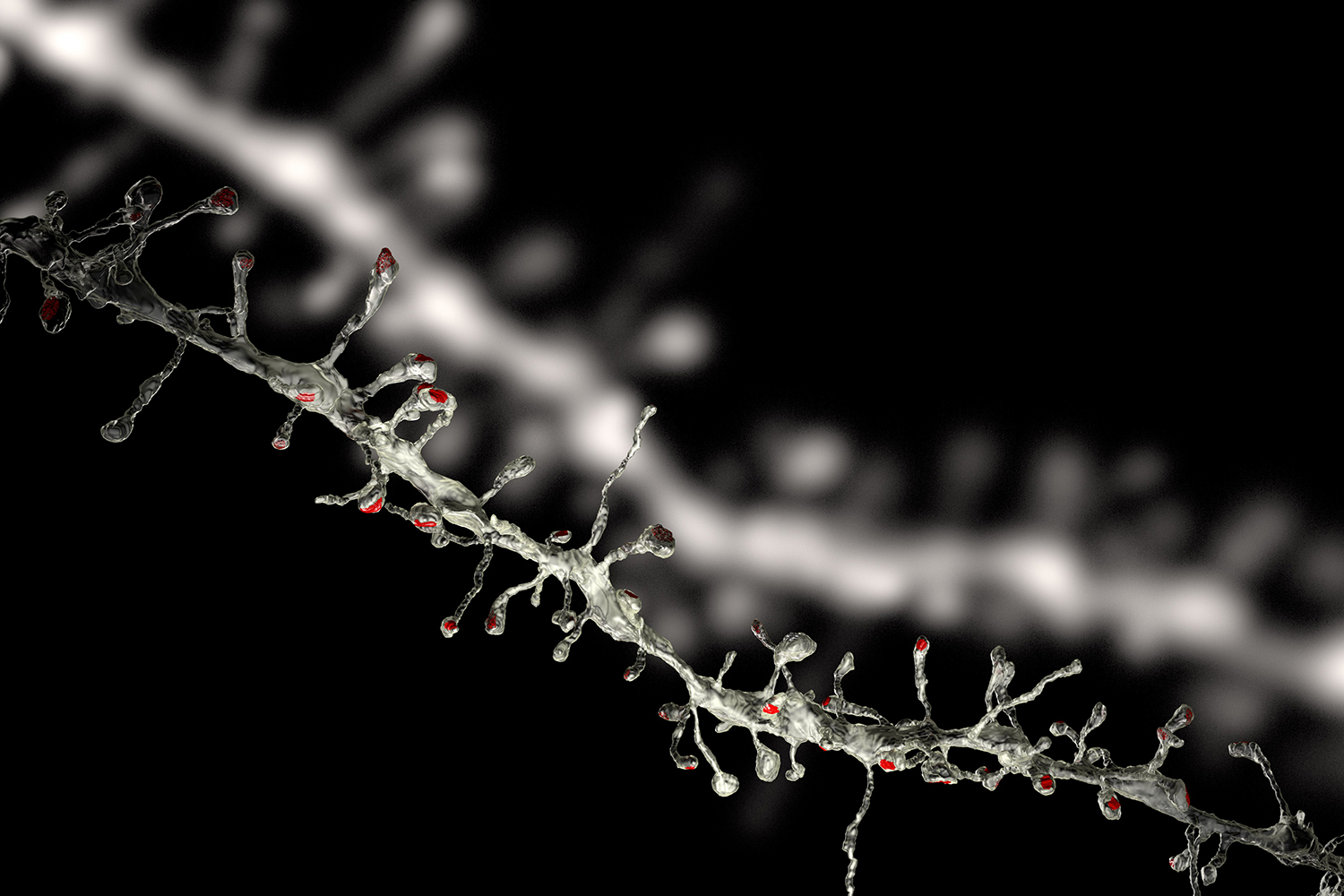 This image of a dendrite — a branch of a neuron — and its spines was reconstructed with electron microscopy (foreground) after it was imaged with two-photon microscopy in an intact brain (background). Image: Sur Lab

Study reveals how, when a synapse strengthens, its neighbors weaken.

Our brains are famously flexible, or “plastic,” because neurons can do new things by forging new or stronger connections with other neurons. But if some connections strengthen, neuroscientists have reasoned, neurons must compensate lest they become overwhelmed with input. In a new study in Science, researchers at the Picower Institute for Learning and Memory at MIT demonstrate for the first time how this balance is struck: when one connection, called a synapse, strengthens, immediately neighboring synapses weaken based on the action of a crucial protein called Arc.

Senior author Mriganka Sur said he was excited but not surprised that his team discovered a simple, fundamental rule at the core of such a complex system as the brain, where 100 billion neurons each have thousands of ever-changing synapses. He likens it to how a massive school of fish can suddenly change direction, en masse, so long as the lead fish turns and every other fish obeys the simple rule of following the fish right in front of it.

“When one synapse goes up, within 50 micrometers there is a decrease in the strength of other synapses using a well-defined molecular mechanism.”

“Collective behaviors of complex systems always have simple rules,” says Sur, the Paul E. and Lilah Newton Professor of Neuroscience in the Picower Institute and the Department of Brain and Cognitive Sciences at MIT. “When one synapse goes up, within 50 micrometers there is a decrease in the strength of other synapses using a well-defined molecular mechanism.”

This finding, he said, provides an explanation of how synaptic strengthening and weakening combine in neurons to produce plasticity.

Though the rule they found was simple, the experiments that revealed it were not. As they worked to activate plasticity in the visual cortex of mice and then track how synapses changed to make that happen, lead authors Sami El-Boustani and Jacque Pak Kan Ip, postdocs in Sur’s lab, accomplished several firsts.

In one key experiment, they invoked plasticity by changing a neuron’s “receptive field,” or the patch of the visual field it responds to. Neurons receive input through synapses on little spines of their branch-like dendrites. To change a neuron’s receptive field, the scientists pinpointed the exact spine on the relevant dendrite of the neuron, and then closely monitored changes in its synapses as they showed the mouse a target in a particular place on a screen that differed from the neuron’s original receptive field. Whenever the target was in the new receptive field position they wanted to induce, they reinforced the neuron’s response by flashing a blue light inside the mouse’s visual cortex, instigating extra activity just like another neuron might. The neuron had been genetically engineered to be activated by light flashes, a technique called “optogenetics.”

The researchers did this over and over. Because the light stimulation correlated with each appearance of the target in the new position in the mouse’s vision, this caused the neuron to strengthen a particular synapse on the spine, encoding the new receptive field.

“I think it’s quite amazing that we are able to reprogram single neurons in the intact brain and witness in the living tissue the diversity of molecular mechanisms that allows these cells to integrate new functions through synaptic plasticity,” El-Boustani says.

“I think it’s quite amazing that we are able to reprogram single neurons in the intact brain and witness in the living tissue the diversity of molecular mechanisms that allows these cells to integrate new functions through synaptic plasticity.”

As the synapse for the new receptive field grew, the researchers could see under the two-photon microscope that nearby synapses also shrank. They did not observe these changes in experimental control neurons that lacked the optogenetic stimulation.

But then they went further to confirm their findings. Because synapses are so tiny, they are near the limit of the resolution of light microscopy. So after the experiments the team dissected the brain tissues containing the dendrites of manipulated and control neurons and shipped them to co-authors at the Ecole Polytechnique Federal de Lausanne in Switzerland. They performed a specialized, higher-resolution, 3-D electron microscope imaging, confirming that the structural differences seen under the two-photon microscope were valid.

“This is the longest length of dendrite ever reconstructed after being imaged in vivo,” said Sur, who also directs the Simons Center for the Social Brain at MIT.

Of course, reprogramming a mouse’s genetically engineered neuron with flashes of light is an unnatural manipulation, so the team did another more classic “monocular deprivation” experiment in which they temporarily closed one eye of a mouse. When that happens synapses in neurons related to the closed eye weaken and synapses related to the still open eye strengthen. Then when they reopened the previously closed eye, the synapses rearrange again. They tracked that action, too, and saw that as synapses strengthen, their immediate neighbors would weaken to compensate.

Solving the mystery of the Arc

Having seen the new rule in effect, the researchers were still eager to understand how neurons obey it. They used a chemical tag to watch how key “AMPA” receptors changed in the synapses and saw that synaptic enlargement and strengthening correlated with more AMPA receptor expression while shrinking and weakening correlated with less AMPA receptor expression.

The protein Arc regulates AMPA receptor expression, so the team realized they had to track Arc to fully understand what was going on. The problem, Sur said, is that no one had ever done that before in the brain of a live, behaving animal. So the team reached out to co-authors at the Kyoto University Graduate School of Medicine and the University of Tokyo, who invented a chemical tag that could do so.

Using the tag, the team could see that the strengthening synapses were surrounded with weakened synapses that had enriched Arc expression. Synapses with reduced amount of Arc were able to express more AMPA receptors whereas increased Arc in neighboring spines caused those synapses to express less AMPA receptors. 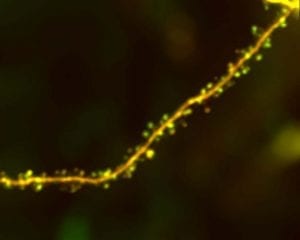 A dendrite with round processes or spines, expresses a red fluorescent protein together with a green tag for the protein Arc, obtained with two-photon microscopy. © Sur Lab

“We think Arc maintains a balance of synaptic resources,” Ip says. “If something goes up, something must go down. That’s the major role of Arc.”

Sur says the study therefore solves a mystery of Arc: No one before had understood why Arc seemed to be upregulated in dendrites undergoing synaptic plasticity, even though it acts to weaken synapses, but now the answer was clear. Strengthening synapses increase Arc to weaken their neighbors.

Sur added that the rule helps explain how learning and memory might work at the individual neuron level because it shows how a neuron adjusts to the repeated simulation of another.

Ania Majewska, associate professor of neuroscience in the Center for Visual Science at the University of Rochester, says the study’s advanced methods allowed the team to achieve and important set of new results.

“Because of the difficulty in monitoring and manipulating the tiny and numerous synapses that connect neurons, most studies have been carried out in reduced preparations with artificial stimuli making it unclear how the mechanisms identified are actually implemented in the complicated circuits that function inside a brain reacting to its environment,” Majewska says. “This new study from the Sur lab has great impact because it combines cutting edge imaging and genetic tools to beautifully monitor the function of individual synapses inside a brain that is responding to behaviorally-relevant stimuli that elicit changes in neuronal responses.

“Given the results from this tour de force approach, we can now say that, in the intact brain, synapses that lie in close proximity to one another interact during changes in circuit function through a mechanism that involves a molecular cascade in which arc plays a critical role,” she said. “This information allows us to understand not only how neuronal circuits develop and remodel in a physiological setting, but provides clues that will be important in identifying how these processes go awry in various neurological diseases.”