Mindfulness may be good for new moms.

A study this month from researchers at the University of Wisconsin–Madison and the University of California, San Francisco (UCSF) shows mindfulness training that addresses fear and pain during childbirth can improve women’s childbirth experiences and reduce their depression symptoms during pregnancy and the early postpartum period.

“Fear of the unknown affects us all, and perhaps none more so than pregnant women,” says lead author Larissa Duncan, UW–Madison professor of human development and family studies. “With mindfulness skills, women in our study reported feeling better able to cope with childbirth and they experienced improved mental well-being critical for healthy mother-infant adjustment in the first year of life.”

The study also suggests that pregnant women who practice mindfulness may use less medication for pain during labor. Many women and their healthcare providers are concerned about the use of medications during pregnancy, labor and while breastfeeding because of the potential risks to infants. Yet, left untreated, maternal mental health problems also pose a significant risk to infants.

“A mindfulness approach offers the possibility of decreasing the need for these medications and can reach women who may not know they are at risk for perinatal depression or can’t access mental health services,” Duncan says.

The new study, published in the journal BMC Pregnancy and Childbirth, is a randomized, controlled trial called Prenatal Education About Reducing Labor Stress (PEARLS), that compares mainstream childbirth education with childbirth education that includes mindfulness skills focused on reducing fear among first-time mothers. Fear of childbirth has been shown in previous studies to be linked to poorer labor-and-delivery outcomes and to depression.

While many consider childbirth education classes a primary resource for pregnant women and their partners to learn information and strategies for the birthing process and remedies for coping with labor pain, there is limited data that demonstrates they achieve these goals for the more than 2 million pregnant women who attend them each year in the United States.

In fact, Duncan says, “sometimes women report that the information in childbirth education actually increases their fear of childbirth.”

For the study, considered a pilot because funding limited participation to 30 women and their partners, first-time mothers late in their third trimester of pregnancy were offered either a standard childbirth preparation course lacking a mind-body focus or an intensive weekend workshop called Mind in Labor: Working with Pain in Childbirth. 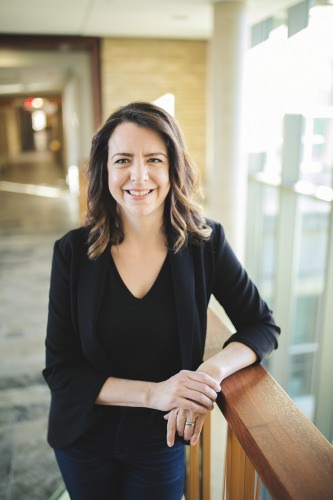 The workshop was based on the Mindfulness-Based Childbirth and Parenting education course developed by study co-author, Nancy Bardacke, a certified nurse-midwife and senior mindfulness teacher at UCSF. It focused on practices like mindful movement, walking meditation, and pain coping strategies. Previous research shows that mindfulness training can be an effective way to manage both chronic and acute pain.

Participants represented a diversity of ethnic and socioeconomic backgrounds. They completed self-reported assessments before and after taking part in a childbirth education course and after giving birth. The mindfulness group also received handouts and guided audio materials so they could practice mindfulness on their own. The study team collected medical record data from each woman.

The researchers found a reduction in depression symptoms in the mindfulness group, which continued through their post-birth follow up at approximately six weeks. In contrast, depression symptoms worsened among women who participated in the standard childbirth education courses.

While mothers in the mindfulness group sought epidurals at similar rates to those in the control group and retrospectively reported similar levels of perceived pain during labor, the study did see a trend toward lower use of opioid-based pain medication during labor.  While these results were not statistically significant, the rate of narcotic use during labor was around 62 percent in the control group and just 31 percent in the mindfulness group. A larger study is needed to better understand this effect.

“The encouraging results of this small study point to the possibility that mindfulness skills can transform the way expectant parents prepare for this profound life change,” says Bardacke. “In addition to supporting moms and babies, we may also be benefiting fathers, who are themselves experiencing the birth of their child and becoming parents. While more research is clearly needed, the larger public health implications of this work are motivating.”

I hope many will find this article. This writeup is very helpful to newlywed couples like me. I am attending Bradley Method and BirthForMen, and I would like to share this article, perhaps this will be taken into consideration. Dealing with post and pre-depression is not easy and should be taken seriously.