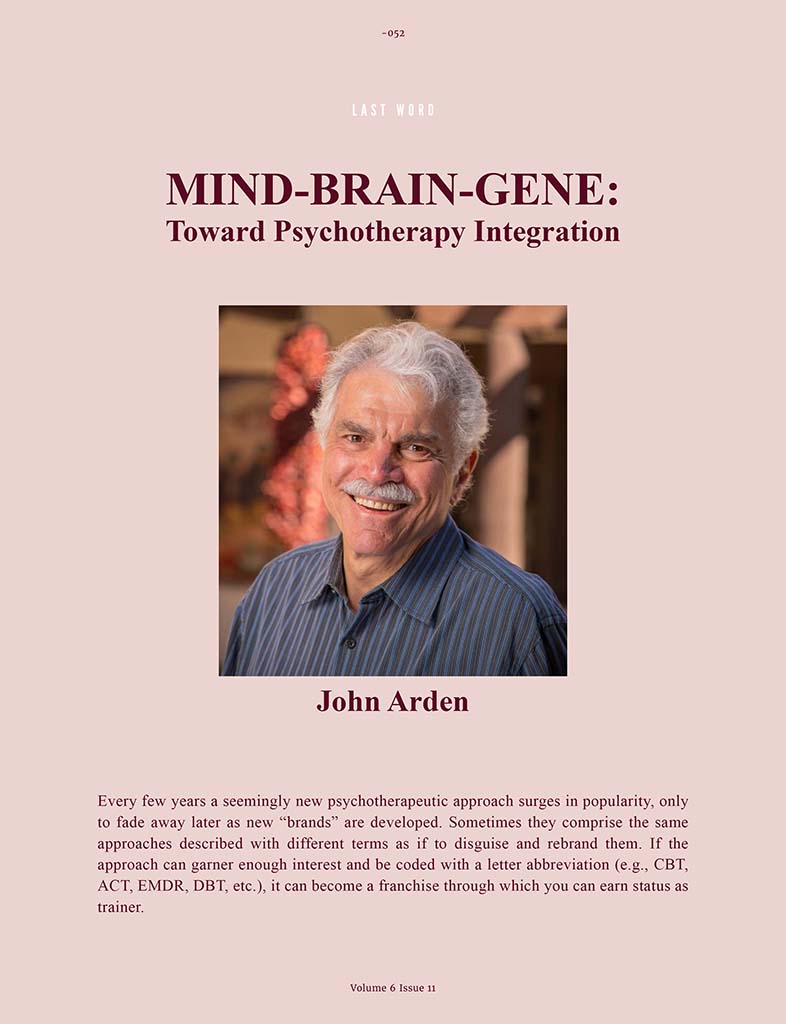 Every few years a seemingly new psychotherapeutic approach surges in popularity, only to fade away later as new “brands” are developed. Sometimes they comprise the same approaches described with different terms as if to disguise and rebrand them. If the approach can garner enough interest and be coded with a letter abbreviation (e.g., CBT, ACT, EMDR, DBT, etc.), it can become a franchise through which you can earn status as trainer.

Recently, several lines of converging research have identified the wide variety of interactive factors that underlie many health and mental health problems. Synthesizing the already substantial research on psychoneuroimmunology and epigenetics, combining it with the neuroscience of emotional, interpersonal, cognitive dynamics, and psychotherapeutic approaches, offers a comprehensive vision of psychotherapy. The integrative model promotes a sea change in how we conceptualize mental health problems and the development of resilience.

[wlm_private “1 Year Subscription|2 Year Subscription|3 Year Subscription|Staff|Basic AutoRenew|Standard AutoRenew|Premium AutoRenew|NPT Basic|NPT Standard|NPT Premium”]We need to explore the multidirectional causal relationships between stress, depression, anxiety, the immune system, and gene expression. The interaction between all these factors plays out in the effects of lifestyle influences on the incidence of health and psychological problems. There are powerful interactions between immune-system functioning, stress responses (e.g., insecure attachment) and lifestyle imbalances (e.g., poor nutrition, poor sleep, and physical inactivity) that lead to anxiety, depression, and neurophysiological dysregulation. Insecure attachment, deprivation, and child abuse contribute to anxiety and depression in far more extensive ways then was once believed. In short, a complex range of interacting health, social, and psychological factors affect the millions of people who seek psychotherapy.

The evolution of psychotherapy has reached the point where the conceptual dividing line between mental health care and physical health care has evaporated. Physical health and mental health are not just two separate systems. Within and between each dimension are multiple nonlinear feedback loops constantly affecting all aspects of health. An integrated approach necessitates addressing how behavior affects the immune system, epigenetics, and the brain in psychotherapy.

Psychotherapy will increasingly address health factors this integration brings to fields of research that had previously been compartmentalized. We apply this approach to psychological disorders such as anxiety and depression to bring the integrative model to life.

My next book, Mind-Brain-Gene: Towards Psychotherapy Integration (Norton, in press), set for release in January 2019, thus presents a perspective antithetical to reductionism. An integrated approach addresses how the immune system can become dysregulated, how autoimmune disorders are associated with mental health problems, and how those same mental health problems feed back to other health problems. For example, though type 2 diabetes increases depression, so depression exacerbates diabetes. Neither can all mental phenomena be reduced to the neuron or a specific neural network: thinking, emotion, and behavior feed back to produce brain change. The concept of mind–brain–gene feedback loops represents the multidirectional causal relationships between the mind, brain and genetics as a larger system, not separate entities. Taken together, all these dimensions interact as nonlinear, multi-faceted, evolving phenomena.

Before the development of psychoneuroimmunology, the mind, the brain, the body, and the genes were assumed to function as semi-independent systems that only influenced each other indirectly. The fields of medicine and psychology were segregated into specialties, and providers practiced an antiquated medical model where each specialty was distinct, and their patients might be referred to a specialist in a particular area outside their own narrowly defined expertise to treat various “diagnoses” they had little knowledge of. This is essentially what happened in psychiatry with psychotropic medications and conceptually in chemical dependency treatment where substance abuse and psychological disorders were referred to as “dual diagnosis”. As if to freshen things up, that term changed to “co-occurring disorders”.

In the 21st century, psychotherapy and health care has evolved to become interdependent. No longer can we justify compartmentalizing the domains to specialists by rationalizing that a particular problem is “not my specialty”. Sure, there are and will continue to be healthcare providers whose experience and training exceeds others in particular areas—I would not go to a dermatologist for a second opinion about my heart, nor would I go to a cardiologist about a bunion. My point is that psychotherapists need to know about the factors that are common to poor mental health and ill health.

The factors influencing mental health and general health are no longer thought to occur as a linear bottom-up causal chain of reactions starting with “bad genes” causing psychological disorders. This sort of “genetic astrology” may still be prevalent in pop psychology but not in psychology. Nor does the semi-dualist belief that causality is merely a top-down process make sense. The truth is that we are not only top-down and bottom-up, but also side-to-side in a myriad of complex interactions.

During the past few decades, efforts have been made to bridge the previously assumed gaps between mind and brain. The pioneering work by Alan Shore (2002), Dan Siegel (1999), and Lou Cozolino (2012) has addressed the connections between attachment research and interpersonal neuroscience. Ernie Rossi (2002) has long promoted the concept that psychotherapy contributes to gene expression. Lou Cozolino (2002, 2012) and I (Arden, 2010, 2015) have integrated neuroscience with psychotherapy; in the field of psychoneuroimmunology, George Solomon pioneered the focus on the interactions between the mind, brain, and immune system. This is the approach offered in my book Mind-Brain-Gene: Towards Psychotherapy Integration (Norton, in press). It attempts to integrate all these areas and combine them with the research on habit, meditation, self-care behaviors, and the mental operating networks that we call the “mind”.