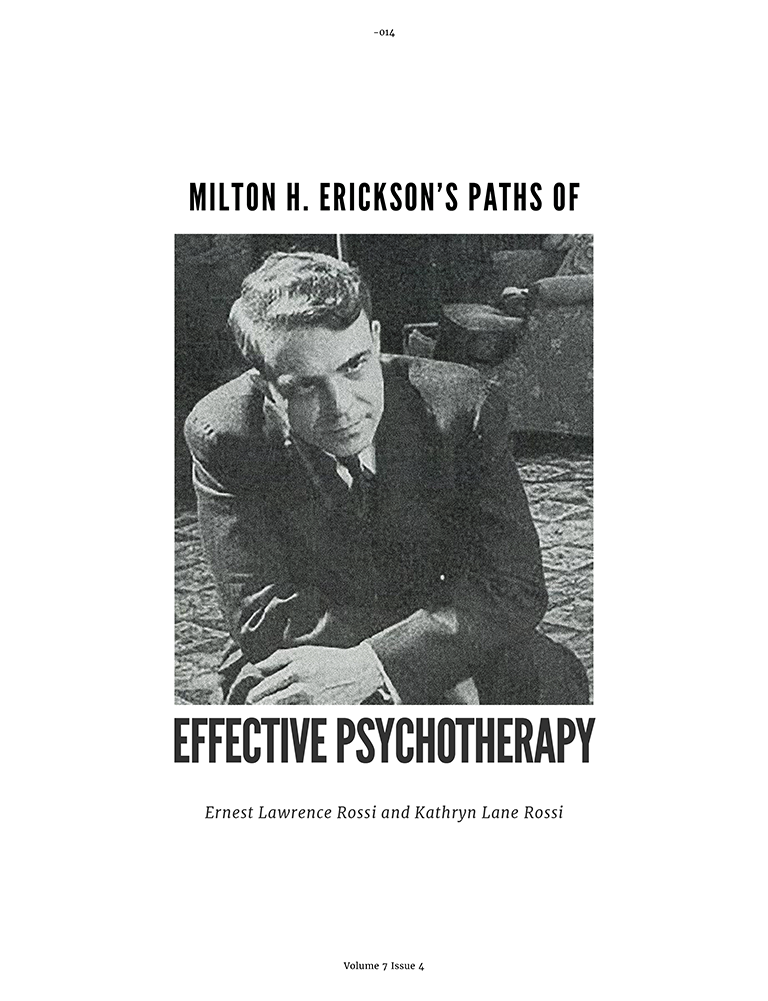 Read this article along with the rest of the issue as a course and gain 2 hours credit:

In this update of Milton H. Erickson’s classic paper, “The Burden of Responsibility in Effective Psychotherapy” (Erickson, 1964/2008), commentaries by Ernest Rossi and Kathryn Rossi, with some occasional comments by Roxanna Erickson-Klein, are added to illuminate Erickson’s innovations as a psychotherapist. This is one of the earliest of Erickson’s papers that initially awakened Ernest Rossi’s interest in how Erickson may have been turning on epigenomic expression and brain plasticity in the client. This is now seen as the psychosocial genomic basis of psychotherapy.

At least a decade before neuroscience was organized as a scientific discipline in the mid-1970s, Erickson was presciently aware that the client could make changes to their own mindset. His 1964 paper illustrates the empathic and gentle informality of his conversational approach to hypnotic induction that was so characteristic of his naturalistic therapeutic technique. So subtle and apparently undemanding was his attitude, however, that many students have not understood the powerful hypnotherapeutic implications of his words. We add our comments on Erickson’s seemingly humble and unassuming therapeutic conversations so students and clinicians can gain insight into how they can facilitate their patients’ own private engagement with the autobiographies of their crises and opportunities, as well as the sources of their problems and symptoms, and most importantly, their highest ideals about the best they can be. Erickson encouraged his patients to explore as many new pathways as they could to achieve their goals. They were able to learn how to practice their own well-meaning empathetic efforts to facilitate creative consciousness and cognition in their everyday lives, as well as in the consulting room.

The following case material is presented because it offers so concisely and clearly a modus operandi in hypnotherapy with the type of patient who has had long experience in failing to derive desired benefits from extensive, traditionally oriented therapy. The three persons reported upon are typical of dozens of others that this author has seen over the years, and the results obtained have been remarkably good despite the fact that the patients were seen on only one occasion for an hour or two.

Comment: Immediately, right here in Erickson’s first two sentences, we witness his empathic, comforting, and compassionate informality with the words patients were seen on only one occasion for an hour or two. This was, apparently, no big deal! It wasn’t until the 1980s that neuroscience recognized that the range of “an hour or two” embraced the typical time parameters of the basic rest-activity cycle (BRAC) and 4-stage creative cycle of therapeutic consciousness and cognition.

In each instance hypnosis was used for the specific purpose of placing the burden of responsibility for therapeutic results upon the patient himself after he himself had reached a definite conclusion that therapy would not help and that a last resort would be a hypnotic “miracle”. In this author’s understanding of psychotherapy, if a patient wants to believe in a “hypnotic miracle” so strongly that he will undertake the responsibility of making a recovery by virtue of his own actual behavior and continue that recovery, he is at liberty to do so under whatever guise he chooses, but neither the author nor the reader is obliged to regard the success of the therapy as a “hypnotic miracle”. The hypnosis was used solely as a modality by means of which to secure their cooperation in accepting the therapy they wanted. In other words, they were induced by hypnosis to acknowledge and act upon their own personal responsibility for successfully accepting the previously futilely sought and offered but actually rejected therapy.

Comment: In these italicized words Erickson is correcting two centuries of misconceptions about the essential intent of hypnotherapeutic consciousness and cognition, and so-called “suggestion”. Erickson’s naturalistic therapeutic suggestion is not a process of stimulus–response Pavlovian conditioning or programming, or insinuating the therapist’s commands in an indirect or hidden manner. Rather, patients were induced by hypnosis to acknowledge and act upon their own personal responsibility for successfully accepting the previously futilely sought and offered but actually rejected therapy.

Case 1. A telephone call was received in the office from a man who stated that he wanted an appointment. He refused to give any reason except that it was for a proper medical reason he preferred to explain in person. At the interview the man stated that he was suffering from Buerger’s disease, that he was a diabetic, and that he had cardiac disease and high blood pressure—“Too much for a man with a family the size of mine and only 50 years old.” He went on, “That isn’t all. I’ve been psychoanalyzed for eight months for five hours a week. During that time my insulin dosage has had to be increased, I’ve gained 40 pounds, my blood pressure has gone up 35 points, and from 1½ packs of cigarettes I have gone up to 4½ packs a day. I am still the psychoanalyst’s patient, I have an appointment with him for Monday, but he is paid up to date. He says he is slowly uncovering the psychodynamics of my self- destructive behavior. I myself think that I’m digging my grave with power tools.” Then with utter gravity he asked, “Would it be unethical for you, knowing that I am another physician’s patient, to give me the benefit of two hours of hypnotherapy this afternoon? My analyst disapproves of hypnosis, but he certainly hasn’t done me any good.”

Comment: Note the patient’s intuitive understanding that about two hours would be required to accomplish his inner creative work. Today we hypothesize this is an example of our natural basic rest–activity cycle (a so-called “mind–body ultradian rhythm”) that usually requires about 90–120 minutes in normal everyday life. While awake this is the natural space–time path of most life activities (work, play, eating, seeing a movie, etc.). While asleep this is the natural rhythm of our paths of slow-wave sleep and REM dream cycles for updating consciousness, memory, and behavior on all levels from mind to brain and genes. We hypothesize this is the scientific rationale why Erickson utilized about 90–120 minutes as the length of his typical sessions of therapeutic hypnosis and psychotherapy with most of his patients.

The simple reply was made that, from my point of view, the question of professional ethics did not enter into the situation at all, that every patient, including mine, has the right to seek from any duly trained and licensed physician whatever proper help he desires, that medical ethics should properly be centered about the patient’s welfare rather than a physician’s desire to keep a patient.

He was then told to close his eyes and repeat his story from beginning to end, to do this slowly, carefully, to drop out the question of ethics and in its place to specify what he wanted from the author. This he was to do slowly, thoughtfully, appraisingly, and as he did so, the mere sound of his own voice would serve to induce in him a satisfactory trance in which he could continue to talk to the author, listen to the author, answer questions, do anything asked of him by the author and that he would find himself under a most powerful compulsion to do exactly that which was indicated.

Comment: These words in italics are not a formal induction of therapeutic hypnosis in the usual sense, when patients believe they are being put into a hypnotic trance by the power of the therapist’s monotonous, repetitive, and comfortable suggestions to “relax” and “sleep”. However, we can now recognize how Erickson’s words were trance-inducing for this patient who was so interested in telling his own numinous story and getting help that it focused his attention with high expectancy—the two characteristics of modern therapeutic hypnosis. This leads me to call those important words an “Ericksonian bridge” or pathway between traditional direct suggestion by a therapist and psychotherapy as we practice it today by facilitating the patient’s own creative cycles. Erickson often did not distinguish between formally induced therapeutic hypnosis and the “general waking trance”, when his patients were in a state of high expectancy and focused attention. We hypothesize that this state of high expectancy and focused attention is the common pathway between Ericksonian therapeutic hypnosis and all other forms of effective contemporary psychotherapy that seek to facilitate consciousness, cognition, and behavior change on all levels from mind to brain and genes that are the integrated quantum pathways of psychosocial genomics today.

The man was taken aback at these unexpected instructions, but leaned back in his chair, closed his eyes, and slowly began his recitation with pertinent additions. Shortly his voice began to trail off, indicating that he was developing a trance, and he had to be told several times to speak more loudly and clearly.

Comment: Unexpected instructions indeed! Only now, about 10 years after the first publication of this update, do I realize that this simple word “unexpected” could imply what I call the “novelty–numinosum–neurogenesis–effect (NNNE)”, when any unexpected surprise could turn on activity-dependent gene expression and brain plasticity to facilitate the growth of new neural pathways and networks in the brain that would underpin the pathways of neurotherapeutic consciousness and cognition.

No mention was made of the question of ethics, but with a wealth of detail he outlined the therapy which he thought to be indicated. He was asked to repeat this several times, and each time he did so more positively, emphatically, and inclusively. After four such repetitions the author pointed out that he, as a physician, had offered no advice or therapeutic or corrective suggestions, that every item in that regard had come from the patient himself, and that he would find himself under the powerful compulsion arising from within him to do everything that he thought was indicated. To this was added that he could remember any selected parts of his trance state, but regardless of what he remembered or did not remember he would be under a most powerful compulsion to do all that he himself thought to be indicated.

Comment: Indeed, a most powerful compulsion to do all that he himself thought to be indicated becomes a new, self-suggested pathway followed by the patient whether he could remember it or not. Notice the comprehensiveness of Erickson’s path of effective psychotherapy. Notice how he has placed the entire burden of effective psychotherapy onto the patient in a sensitive, empathic, and agreeable manner.

He was aroused, a casual conversation initiated, and he left.[Content protected for subscribers only]

Ernest L. Rossi, PhD, is an internationally renowned therapist, teacher, and pioneer in the psychobiology of mind-body healing. The author of more than 24 professional books, Dr. Rossi worked with Milton Erickson for eight years and co-authored three classic volumes on therapeutic hypnosis with him. Rossi has also edited four volumes of Erickson’s Collected Papers and four volumes of Erickson’s Seminars, Workshops and Lectures. He has been conducting research in the psychosocial genomics of ultradian rhythms and their relation to mind-body healing and psychotherapy for over three decades.

Kathryn Rossi, PhD, is a licensed psychologist and certified yoga instructor (RYT 500). She is co-editor of the 16-volume Collected Works of Milton H. Erickson and is editor and co-author of numerous books and articles with Ernest Rossi. Her unique contribution is on the understanding of yoga as a therapeutic practice in relation to psychotherapy, cognition, and consciousness She is in private practice in Los Osos, California