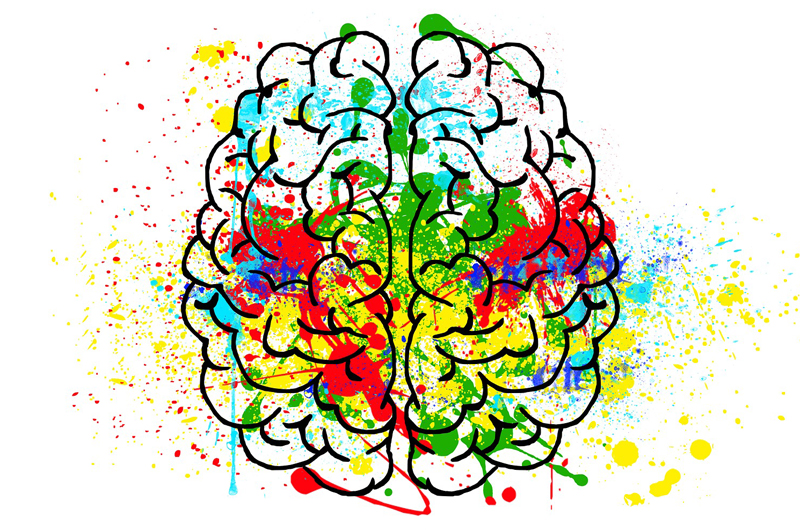 Your brain’s reward pathways become active during art-making activities like doodling, according to a new Drexel University study.

Girija Kaimal, EdD, assistant professor in the College of Nursing and Health Professions, led a team that used fNIRS (functional near-infrared spectroscopy) technology to measure blood flow in the areas of the brain related to rewards while study participants completed a variety of art-making projects.

Examples of the coloring activity.

“This shows that there might be inherent pleasure in doing art activities independent of the end results. Sometimes, we tend to be very critical of what we do because we have internalized, societal judgements of what is good or bad art and, therefore, who is skilled and who is not,” said Kaimal of the study that was published The Arts in Psychotherapy. “We might be reducing or neglecting a simple potential source of rewards perceived by the brain. And this biologocial proof could potentially challenge some of our assumptions about ourselves.”

For the study, co-authored by Drexel faculty including Jennifer Nasser, PhD, and Hasan Ayaz, PhD, 26 participants wore fNIRS headbands while they completed three different art activities (each with rest periods between). For three minutes each, the participants colored in a mandala, doodled within or around a circle marked on a paper, and had a free-drawing session.

During all three activities, there was a measured increase in bloodflow in the brain’s prefrontal cortex, compared to rest periods where bloodflow decreased to normal rates.

The prefrontal cortex is related to regulating our thoughts, feelings and actions. It is also related to emotional and motivational systems and part of the wiring for our brain’s reward circuit. So seeing increased bloodflow in these areas likely means a person is experiencing feels related to being rewarded.

There were some distinctions between the activities in the data collected.

Doodling in or around the circle had the highest average measured bloodflow increase in the reward pathway compared to free-drawing (the next highest) and coloring. However, the difference between each form of art-making was not statistically significant, according to analysis.

Examples of the doodling activity.

“There were some emergent differences but we did not have a large-enough sample in this initial study to draw any definitive conclusions,” Kaimal said.

It was noted and tracked which participants in the study considered themselves artists so that their results could be compared to non-artists. In that way, Kaimal and her team hoped to understand whether past experience played a factor in triggering feelings of reward.

“I think artists might have felt very constrained by the pre-drawn shapes and the limited choice of media,” Kaimal explained. “They might also have felt some frustration that they could not complete the image in the short time.”

Again, however, these results regarding artists versus non-artists proved statistically insignificant, which might actually track with Kaimal’s previous research that found experience-level did not have a bearing on the stress-reduction benefits people had while making art.

Overall, though, the finding that any form of art-making resulted in the significant activation of feelings of reward are compelling, especially for art therapists who see art as a valuable tool for mental health.

Examples of the free drawing activity.

In fact, in surveys administered to the participants after the activities were complete, respondents indicated that they felt more like they had “good ideas” and could “solve problems” than before the activities. Participants even said they felt the three-minute time spans for art-making weren’t long enough.

“There are several implications of this study’s findings,” Kaimal said. “They indicate an inherent potential for evoking positive emotions through art-making — and doodling especially. Doodling is something we all have experience with and might re-imagine as a democratizing, skill independent, judgment-free pleasurable activity.”

Additionally, Kaimal felt that the findings of increased self-opinion were intriguing.

“There might be inherent aspects to visual self-expression that evoke both pleasure and a sense of creative agency in ourselves,” she said.

After reading this article my adult colouring book is coming off the shelf tonight. It will be interesting to see if I can cajole my wife into joining me as this might be a simple way of encouraging cognitive stimulation and slowing down the progress of vascular dementia.

I wonder if the doodling exercises would be an activity that may slow the progress of dementias like other cognitive activities.

Interesting article. As an artist, I can relate to this and think it is pretty much on target.