Love hormone is released during crises

LOVE HORMONE: Oxytocin is often called the “love hormone” or “cuddle chemical”, but American and Norwegian researchers have found out that it may as well be called a “crisis hormone.”

“When people notice that their partner is showing less interest in their relationship than they are, the level of this relationship-building hormone increases,” says Andreas Aarseth Kristoffersen, a research assistant in NTNU’s Department of psychology.

The hormone oxytocin has long been associated with relationships in several different ways. Oxytocin has a great reputation, because it is thought that it can make us feel better by reducing anxiety and making us feel more generous. Our brain secretes it during orgasm. It also influences the relationship between mother and child.

But it’s not all cuddling and love.

“Two main theories exist. Some scientists believe that oxytocin is released primarily to enhance a relationship and make it stronger when you’re with someone you love,” says Aarseth Kristoffersen.

But others believe that oxytocin levels increase primarily when we find ourselves in difficult or even threatening situations. In those cases, the hormone helps us seek out new social relationships.

However it may not just be either-or.

NTNU researchers joined researchers from the University of New Mexico to study the connection between oxytocin and investment in couple relationships.

The researchers examined 75 American couples, and 148 Norwegian individuals who were one of the partners in their relationships. Newly minted PhD Nicholas M. Grebe is the study’s first author and visited Professor Kennair at NTNU’s Department of Psychology. Kennair has collaborated with Grebe’s PhD advisor Professor Steven W. Gangestad.

“Participants in the study were asked to think about their partner and how they wish their partner would connect with them in the relationship,” says Trond Viggo Grøntvedt, PhD, from the Department of Psychology. (See Fact Box for precise wording.)

This was the task

Oxytocin levels were measured both before and during the tasks. In both studies, individuals showed elevated hormone levels when they felt strong personal investment in the bond. In this case, oxytocin’s reputation as a love hormone holds up.

“Yes, oxytocin relates to one’s feelings of involvement — but, this association is particularly strong when one feels more involved than their partner,” says Grebe.

But the crucial finding came from simultaneously examining both partners’ involvement.

The partners who were more invested in a relationship released more oxytocin when they thought about their relationship than the less invested partner did.  Considering both members together, it was the difference in investment between partners that predicted an increase in oxytocin. Here, oxytocin may be acting more like a “crisis hormone”.

“It’s seems contradictory that you would release more oxytocin both when things are going well and when they’re not, but that’s how it is,” says Aarseth Kristoffersen.

But why would that be?

Put more effort into the relationship

“This may be because people in a relationship where their partner is waffling need to engage more,” Aarseth Kristoffersen says.

“The idea behind the prediction was that oxytocin might promote attention and motivation toward the relationship when it was both important and threatened,” says Professor Gangestad.

For example, the partner who is most invested in the relationship might benefit from putting even more effort into making it work, so that the more sceptical party re-engages.

“What’s implied here is a statement about what oxytocin is doing: It’s perhaps fostering attention to and motivation to ‘take care of’ the relationship,” says Gangestad. 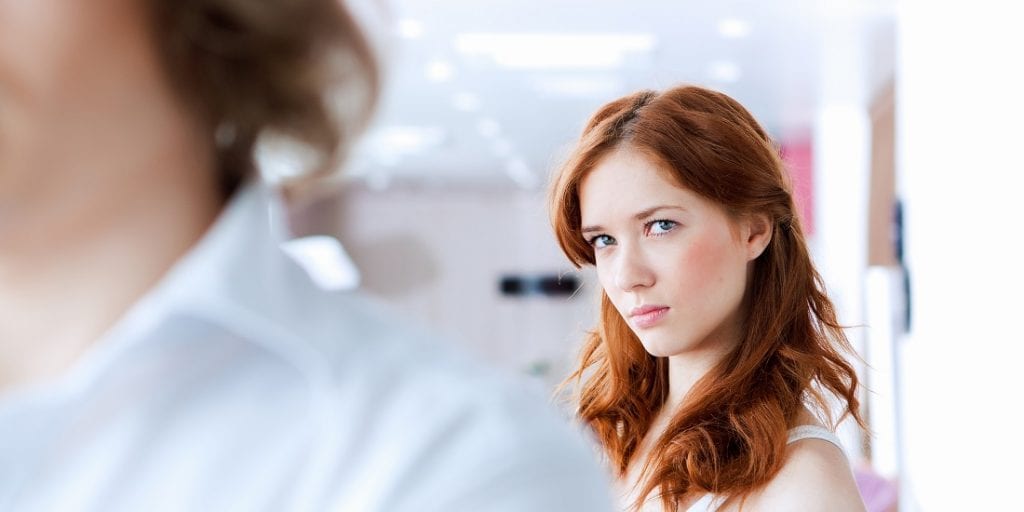 Until all is lost anyway

Nevertheless, there is apparently – some would say fortunately – a limit. This would apply to relationships where everything seems lost and is clearly heading for a break-up. In those situations, the more invested partner does not show the same increase in oxytocin levels.

“There’s no point in investing more in a lost cause,” says Kennair.

There appears to be a limit to how long you should spend energy and resources on a relationship that is simply over.

However, this is still mostly speculation for now.

What you believe is what matters

The researchers found no significant difference between US and Norwegian results. Responses to the study tasks were consistent across cultural conditions, which reinforces the theory that the underlying explanation is biological.

The procedure in the two countries differed somewhat. The American couples were asked directly about how committed they were in their relationships. The Norwegian individuals were asked how invested they thought their partner was in the relationship. This made no difference for the results.

It is enough if you think the relationship is weakening because your partner is losing interest. This will trigger your brain to release extra oxytocin.

“I might emphasize that it isn’t necessarily “bad” or “good” for a person to release oxytocin. Yes, it might motivate attention that helps to maintain a relationship, but as the article hints, that isn’t necessarily desirable, though it could be! What is biologically “functional” and socially “desirable” are two different things,” says Grebe.

“We think that viewing oxytocin in this way can help us understand why it plays a role in other kinds of interdependent social relationships—new romances, mother-infant bonds, as two examples. The idea is that emotionally salient relationships, especially when those relationships are vulnerable, are elicitors of the oxytocin system,” Nick Grebe concludes.