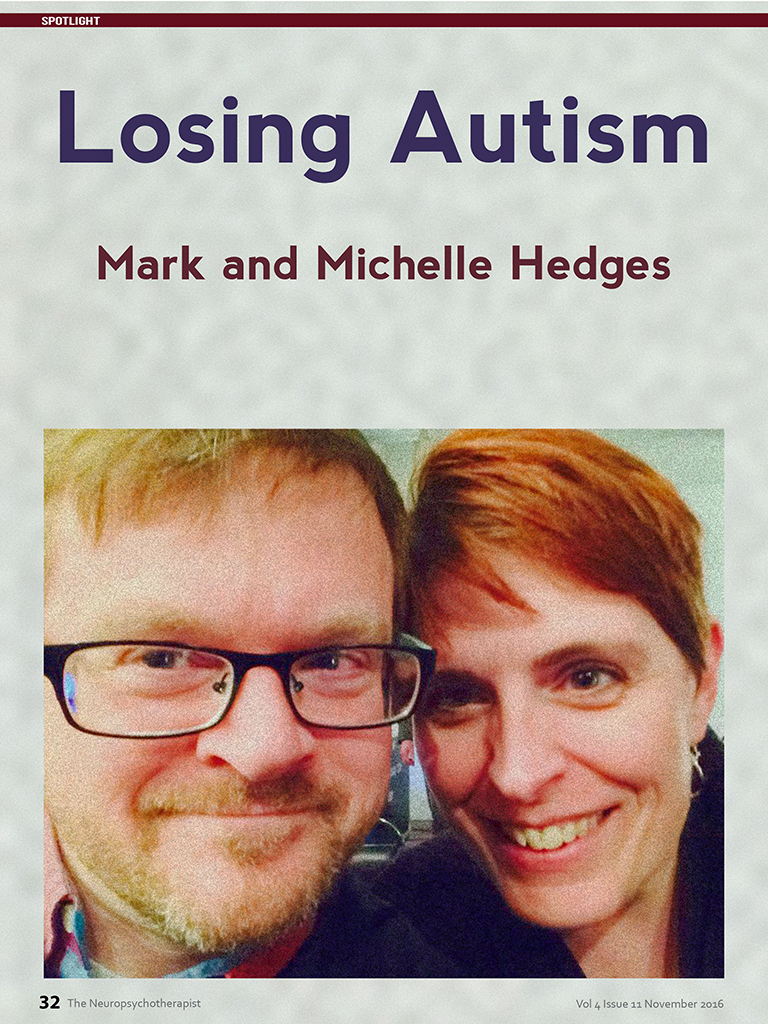 I had suspected I was different since I was very young. I just didn't know what kind of different I was. When I went to kindergarten, I didn't play with anyone. I usually just sat and read books. I thought life was going to be fun—you know, with all the reading and learning and being alone. To quote a Bible verse, I was “cut off out of the land of the living”, but I didn't know it, and I didn’t care.

As I got older, I started noticing that I was feeling only two emotions: fear and frustration. I felt them only when they were extreme. I heard other people talk about all kinds of other emotions that they were feeling, but I had no clue where these emotions arose, died, or existed. All the humans I worked around positively “gassed on” about feeling this way or that way, but I never really wondered about it. To me, it was all some fictive reality that they conjured up for their sanity.

Then I met a woman who seemed to have an instant attraction to me. The only reason I knew there was an attraction was because she told me, “Hey, I like you. You’re interesting.” I had never had that happen to me before. I didn’t feel anything, but I trusted her for some reason, and we got married.

The cruel joke, however, was that Michelle (my wife) then spent the next few years realizing that she was married to an eccentric, brick wall of a human being. I had trouble figuring out why she liked me so much. I would constantly ask her, “Why do you like me so much?” Her answer was usually something platitudinous: “Because you’re interesting to me!” or “Because you’re you!” What I wasn’t realizing was that she was communicating her feelings about me through words to explain why she was attracted to me. I didn’t understand that emotional attraction alone could be enough to hold someone’s attention. I would continually annoy her with the query, “Are you going to leave me?” because I didn’t and couldn’t “feel” her attraction.

I struggled with college and had trouble finding employment. I became concerned that something was really wrong with me. I happened upon the Adult Autism Spectrum Quotient test and decided to take it. I scored 37 out of 50 (74%). I went to a psychologist who diagnosed me with Asperger’s syndrome and obsessive–compulsive personality disorder. After getting a proper explanation, my life, past and present, started to make a little more sense.

In July of 2013, Michelle read about the GAPS (gut and psychology syndrome) diet (http://www.gapsdiet.com). While I was initially sceptical, I knew from all of the biology coursework I had taken that the intestinal lining is where 99% of all our nutrition is absorbed. From molecular and cellular biology, I also knew that the most important chemical compounds in cell-to-cell communication in our brains were made out of proteins. If our intestines had been damaged by what we had been eating or taking as medicine, then we wouldn’t be getting the proper nutrition for our brain cells. The theoretical principles made a lot of biological sense to me. So we started the diet, but I didn’t really expect anything to change.

Change things did. About three weeks after starting the diet, I began to feel transactions of energy between myself and other people. When this happened, it produced in me an emotional response to what had just occurred, or to the person I had just interacted with. When these exchanges happened between me and Michelle, I was compelled to smile. Even the thought of Michelle forced me to smile. Before that, the same thought was merely a simple acceptance of Michelle’s existence. In other words, a fact. That’s all. Interactions between me and other people changed too. When someone yelled at me, I immediately felt my own anger at the injustice (instead of feeling it two days later) and responded in kind. That meant I could suddenly defend myself after 45 years of running and hiding.

When I “woke up” from the autism, one of the first things I noticed was how differently I perceived life itself. I started to sense other people on a three-dimensional level of emotions. I didn't feel others all the time, but periodically I would notice a change in my body right around the solar plexus. The change seemed to be caused by someone else's heightened emotion.
Those sensations caused an interesting experience for me. Instead of merely influencing my conscious state, I could say that feeling emotions for the first time, whether mine or someone else's, was a tangibly embodied experience for me. I felt connected to me for the first time. I knew how I “felt” about something for the first time. I knew how someone else “felt” about something as well. Because of this awakening, life actually felt real. Life became like watching color TV after spending 46 years watching everything in black and white.

It was not an easy transition from “not feeling” to “feeling”. I often miscalculated the intensity of the feelings I was getting from Michelle. I overdramatized her emotions because I didn’t know what her normal intensity was. She might have stubbed her toe and I thought she was going to die. We slowly worked through that.

Here are three instances of my having “first” feelings. I had a “feeling interested” in Michelle moment. This transaction took place across a room. I felt a distinct pleasurable feeling when I looked at her. I couldn’t believe that just looking at her could create such a compellingly pleasant emotion. In another case, one of my managers and I had been talking about computers on and off as a common hobby. After a while I noticed that when he saw me, I could immediately see his focus turn directly to me. I realized then that he liked talking with me. I found that amazing – that I could now actually know when someone liked me. An unpleasant first feeling was the feeling of blame thrown at me by a manager at work. I felt a weird, twisting, twinge of emotion in my solar plexus area. I immediately recognized it as guilt. I stopped and thought about why I was feeling guilty. Then I realized that this guilt was not associated with anything I had done. My manager was trying to absolve himself of a screw-up, for which he had been responsible, by blaming me. It dawned on me then how emotions could be used to manipulate people. That made me really angry. I finally understood what others were going through when they talked about being blamed for other people’s problems.

A word of warning to professionals out there assisting people through this transition: The diet does create a gradual change; however, the feelings that emerge will likely be foreign and frightening to those coming out of autism. These feelings are new and quite consciously apparent. Clients will be unaware of how dangerous their feelings might be to others. I liken this to someone handing me a loaded gun, showing me how to pull the trigger, but not telling me that I could hurt someone with it. Clients will need to be reassured that their emotions are normal.

Without Michelle’s guidance and teaching, I wouldn’t have made it through this emotional quagmire without permanently burning important bridges. On that note, I will leave you with some words from Michelle:

“Having lived with an autistic husband for 20 years, and suddenly he was not autistic anymore, was shocking to the emotional system and the mind. It was pretty strange adjusting to a “normal” life. Watching a fully formed personality pull its way out of a body that had kept him in survival mode was astonishing. I’d had an inkling that the person he is now was there, but not to this extent. I thought he would have to get used to emotions and play with them to get to know what they do and how they work. But as emotions occurred, he seemed to have an innate ability to understand them. (Does that mean emotions come with instructions attached?) For 20 years, I was his life. Now he is creating his own life. I’m doing my best to “go with the flow”. There are times that the separateness—if there ever was togetherness—is too much of a gap for me. We discuss it and I’m OK again. It’s a process. A process of separateness in togetherness.

Today he told me that he got a warm, fuzzy feeling on the way home from work, thinking that I would be home when he got there. I laughed. When we were first married, I was too “needy”, so I eventually shut down. Now that he’s got his first warm, fuzzy feeling about me in the 21st year of our marriage, what do I do with that? The absurdity struck me as funny and made me a little nervous. I have to change. Again.

It would probably be best to remember the S in ASD is there for a reason, and experiences will vary. Nothing I read in that article suggests he was generalising but I have found what he describes to be a certain tendency among people like us, more pronounced than others in some.