I’m struck by the fact that Jim McCarthy’s happiness workshops and his 2019 book, Live Each Day: A Surprisingly Simple Guide to Happiness, lean so heavily on our mortality.  I think many people might initially be shocked to discover that the happiness workshop they signed up for begins with exercises designed to get them really, really in touch with the reality that they are going to die.

It’s not so surprising when you learn that Jim McCarthy is a cancer survivor whose brush with early death, in a sense, brought him more fully to life.

In my conversation with Jim, he didn’t mention the shamanic anthropologist and author, Carlos Castaneda. The two injunctions that have stayed with me all these years from Castaneda’s 1968 book The Teachings of Don Juan are “follow the path with heart” and to never forget that Death is just over one’s left shoulder.  Don Juan Matus shamanic practices and beliefs are thought to go back more than 1,000 years to the Toltec civilization.  Of course, other spiritual traditions have posited a link between Death and Happiness in terms of Death being the gateway to a paradise of everlasting joy. 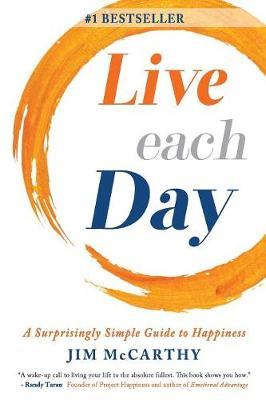 Jim McCarthy’s emphasis on courting a deep awareness of death as a foundation for happiness has a personal resonance for me.  I recall that as a young adolescent I occasionally would try to grasp the reality that I would one day die. I remember doing this at night in bed before sleep.  It was like climbing an ice mountain.  It would take tremendous effort for me to crawl up to that powerful, direct realization that it would really happen to me.  I could sustain the full realization of that reality  for only the briefest heart-pounding moment only to then slide back down the slippery slope of the mountain.   I imagine some outside observers might think I was suffering from a morbid obsession with Death. But I wasn’t obsessed.  It was something I did only a few times, as I recall, but I had a deep conviction that I had discovered something extremely important, something I suspected that was relatively rare, an experience that was an induction into a special club.  Jim McCarthy’s brush with cancer was his induction.

McCarthy’s book is not one for casual reading.  He wants his readers to have the experience—the experience they would have if they were to take one of his workshops.  Consequently, his book is rife with writing exercises.  As he sees it, happiness will not just happen along the way as a result of either casual reading or casual living.  Rather, it’s a learned skill and like other skills requires sustained practice to achieve proficiency.

He draws heavily on the Positive Psychology movement’s repertoire of tools such as gratitude, forgiveness, mindfulness, nurturing relationships and so on, emphasizing the fact that each of these is backed up by a base of research.  He’s proven the utility of these practices in his own life and seen their fruits in the lives of his workshop participants.  As a Stanford MBA and early Yahoo! executive, he’s a results-oriented guy.  With a heart.