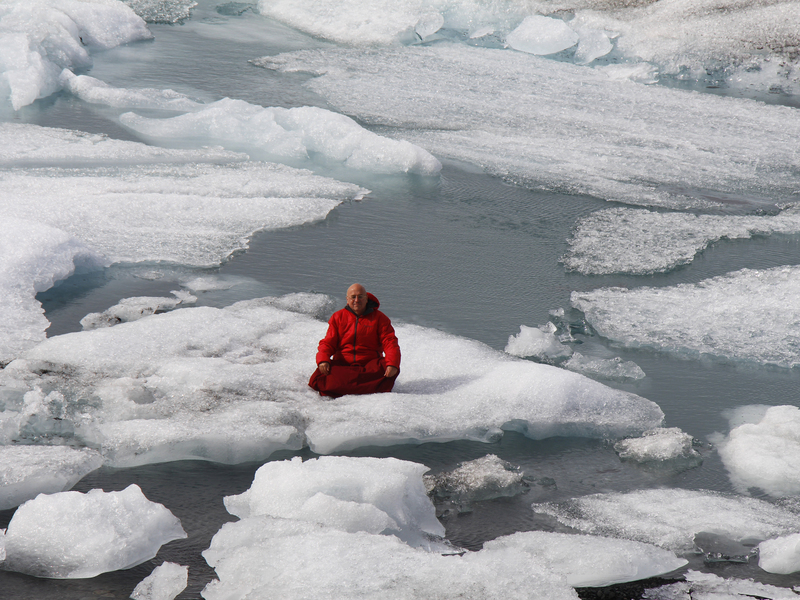 One of the goals of meditation is to reduce stress in our daily lives. A new study suggests that social stress – the most common form of stress in Western societies – can best be reduced by means of special partner-based meditation exercises © Tania Singer, MPI for Human Cognitive and Brain Sciences,

The human brain is able to change and adapt to new conditions throughout life. Scientists refer to this capacity as plasticity. Until recently, it was unclear to what extent areas of the brain that control social behaviour also possess this ability. To find out, a research team led by Tania Singer, Director at the Max Planck Institute for Human Cognitive and Brain Sciences, developed methods for training social skills and measured their effects on the behaviour of study subjects, their brain structures and their hormonal balance. Two important findings have now been published in the journal Science Advances.

Meditation is beneficial for the body and mind. Though this may sound trite, it has in fact been demonstrated in a number of studies on the effects of mindfulness training. However, the terms meditationand mindfulness cover a gamut of mental techniques that aim to cultivate a broad range of skills. Despite growing interest in meditation research, it is still unclear which mental training techniques are particularly suitable for enhancing awareness and mindfulness as well as social skills such as compassion and cognitive perspective-taking. Another key question concerns the extent to which these various mental training methods lead to structural brain changes in neural networks underlying the exercised skills in adults. It is also unknown which mental techniques reduce psychosocial stress most effectively at the hormonal level. To find answers to all these questions, a team of researchers in the Social Brain Science Department of the Max Planck Institute for Human Cognitive and Brain Sciences in Leipzig, led by Tania Singer, investigated how various meditation techniques for developing mental and social skills affect the brain and the body.

For the large-scale research project, called ReSource, Tania Singer, together with international experts, developed three three-month-long training sessions, each concentrating on a specific skill area. The first module focussed on the factors of awareness and mindfulness. During classical meditation exercises used in this module, the subjects, each on his or her own, practised focussing solely on breathing, sensory impressions or specific parts of the body.

The second module paid particular attention to what are known as socio-affective skills, such as compassion, gratitude and dealing with difficult emotions. The special thing about this module is that, in contrast to the mindfulness exercises, a new technique was used in which two people train together. In partner-based exercises, known as contemplative dyads, the subjects focussed on sharing their emotions in order to train closeness, gratitude, empathy and the ability to handle everyday stress factors.

The participants performed the exercises for 30 minutes a day, six days a week. After each of the three units, the researchers tested the participants’ training-induced behavioural changes. They also measured changes in the brain structure by means of magnetic resonance imaging (MRI) and checked the stress system by means of numerous biomarkers, such as the levels of the stress hormone cortisol in saliva.

Each technique has its own effects on brain plasticity

And in fact: “Depending on the mental training method used for three months, the brain structure in the associated areas as well as the related behaviours changed. After the first training module, the subjects showed growth of the cerebral cortex in the areas responsible for mindfulness. At the same time, their mindfulness had improved in computer tests. However, their compassion and ability to change perspectives did not increase. The latter required the social training modules,” explains Sofie Valk, lead author of the original publication, which appeared in the journal Science Advances.

“In the two other modules, which trained either socio-emotional or socio-cognitive skills, we observed that compassion or cognitive perspective-taking were selectively enhanced, and that these improved social skills were associated with increased cortex thickness in those regions that process compassion or changes in perspective,” says the Dutch-born researcher. “Although research into the plasticity of the brain, meaning its ability to change, has always played a central role in the neurosciences, very little was known about the plasticity of the social brain,” explains Tania Singer, head of the ReSource project. “Our findings now clearly show that short, targeted daily mental training can still bring about structural changes in the adult brain, which in turn lead to an improvement in social intelligence. Since attributes such as empathy, compassion and perspective-taking are essential for successful social interactions, conflict resolution and cooperation, these findings could prove highly relevant to our educational system.”

Stress also decreased depending on the method

The various forms of mental training appear to have different effects not only on the brain but also on stress levels. “We discovered that in a test in which the subjects were exposed to a stressful performance situation, they released up to 51 percent less of the stress hormone cortisol. However, this depended on the mental technique that was previously exercised,” explains Veronika Engert, lead author of another study recently published in Science Advances which dealt with the relationship between mental training and acute stress reactions. “The two training modules that focussed on social skills reduced cortisol levels significantly. By contrast, the only module designed to enhance awareness and mindfulness failed to lessen social stress at the hormonal level. We suspect that stress levels were reduced primarily by the ten-minute daily social interactions in the dyad exercises. To open oneself on a regular basis to a stranger and to learn to listen to another person without prejudice probably led to a kind of immunization against social stress, because social stress results largely from a fear of negative judgment by others. However, targeted mindfulness training does not appear to reduce this kind of social stress.”

An interesting finding was that subjectively, the subjects felt less stress after each of the three training sessions. Objectively, however, their stress exposure, as measured by their cortisol levels, diminished significantly only when they interacted with others during the social training sessions designed to exercise intersubjective skills.

“Observation of the brain, the behaviour and the stress response of the participants shows not only that social skills can be exercised and stress reduced, but also that various forms of mental training can have very different effects on the brain, health and behaviour,” Tania Singer explains. “If we know exactly which meditation exercises and mental techniques are effective, we can use them in a much more targeted manner in training programmes to enhance mental and physical health.” Thus, the results show that frequently practised basic mindfulness techniques are the most suitable methods for increasing awareness and performance in various cognitive areas. However, if your aim is to be less prone to social stress in everyday life or to enhance your social skills, such as empathy, compassion, and perspective-taking, you should use other mental training techniques that focus on the “we” and the social bond between people.