Leading with Integration in Mind

Leading with Integration in Mind 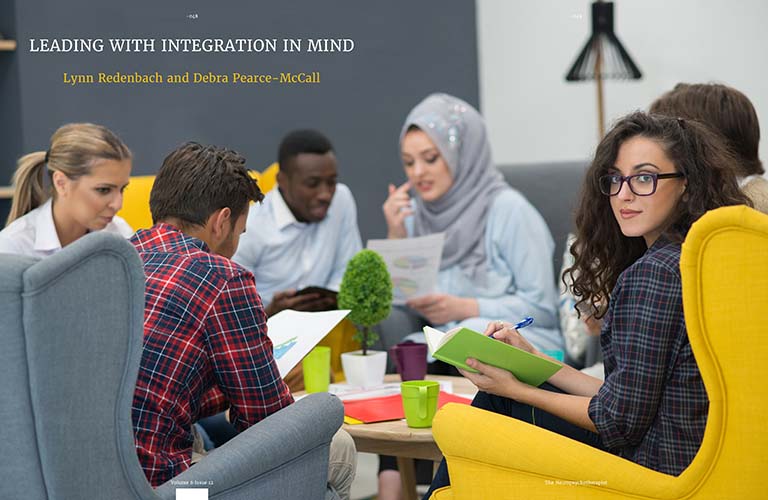 What is it that leaders are leading? People? Profits and results? Processes? Do they lead toward empowerment or power? Should they respect diversity and encourage the sometimes messy complexity that arises from its connections; or should they appreciate order and advocate conformity to standards? Is there really one best way to lead, or do different people need different forms of leadership? Perhaps, since we find leaders in every human sphere and in most human interactions, we all need varying forms of leadership in differing contexts. If that is true, can we still define any common factors found in optimal leadership, in all its manifestations?

Even the question of who is a leader has a multi-faceted answer. Sometimes a leader is in a designated leadership role (e.g., CEO or director), and sometimes a leader emerges from a group interaction, or in a specific situation. Often some aspects of leadership are shared among all the people involved, whether this pervasive leadership (Love & Estanek, 2004) is recognized or not. In all relational professions, like coaching, healing, or educating, practitioners are called upon to exercise leadership toward growth and health. And we are all challenged daily to be leaders to ourselves and people around us, when we regulate nervous systems and support human potential through conversations and actions. In the political sphere, we clearly have some contradictory ideas about what kind of leadership humanity needs to face upcoming global crises. In moments big and small, the key question of the day is: can we define and implement ways to lead that are supported by what we know scientifically about human and relational well-being—ways that promote health for people, communities, institutions, organizations, and the planet? Using the lens of interpersonal neurobiology (IPNB), we see the answer: Yes.

The IPNB Lens on Leadership

The growing field of IPNB creates an incredibly useful meta-framework for relational endeavors, including leadership. By looking through the lens of IPNB, we are guided to reflect upon and within ourselves and our relationships, organizations, and beyond—recognizing these different realms of lived experience as emergent complex systems with an interconnected living flow of energy and information moving among them. The authors apply IPNB in leadership, consulting, coaching, psychotherapy, training, and teaching. Information for this article has been gathered from our original work in applying IPNB to leadership and organizations, our review of other existing applications of IPNB to leadership, and conversations with several Advisory Board members of the Global Association for Interpersonal Neurobiology Studies (GAINS) about their current thoughts on leadership.

One of the overarching principles of IPNB is integration, grounded in complexity science. Defined as “the linkage of differentiated parts” (Siegel, 2017, p. 253), and considered to be both a verb (integrating/integrative) and a noun (integrated), IPNB underscores the importance of integration across all dimensions of human experience (Goleman & Siegel, 2016; Siegel, 2012a). Considering this, we propose that leaders take the pulse of integration in the systems they lead. Optimally, this information would inform the direction of their attention, intentions, and energy. For example, they may decide to influence or direct individual and group efforts toward integration, or to hold space for discomfort or uncertainty, fostering adaptive changes a leader observes emerging in and among individuals, teams, and the organization itself. The essence of leading emergence is described by Pat Ogden, founder of Sensorimotor Psychotherapy and GAINS Advisory Board member, in this excerpt from a longer reflection on the commonalities between therapists and leaders:

The term ‘organicity’, drawn from the work of Gregory Bateson (1979), conveys that each living system has its own unique intelligence and unfolding. This wisdom is emergent, mysterious and cannot be predicted. . . . Organicity [implies] that each client has the answers they seek within them . . . and the therapist, with the client, creates a context—or container, or atmosphere—within which healing wisdom is inspired. . . . There is organicity in a group as well, a mysterious relational alchemy that brings people together for a common purpose. The group is greater than the sum of its parts, and it is the leader’s task to assume—indeed, to know—that the creativity of the group alchemy will produce the sought-after experience, answers, or solutions. A good leader draws forth that collective intelligence by recognizing its existence and creating an atmosphere in which it can emerge. The group wisdom is already there—the leader, like the therapist, only needs to have faith in that wisdom, ask the right questions, make the right contact, and facilitate the right connections so that that wisdom is revealed. (P. Ogden, personal communication, October 22, 2018)

In order to facilitate this, an IPNB-informed leader is open to and observant of their own and others’ energy and information patterns, which may be tending toward chaos, toward rigidity, or toward the more balanced places on the continuum in between. Of course, we should note that with or without intention, leaders can also influence patterns toward remaining at the dis-integrative extremes, decreasing systemic and individual health. The field of IPNB has gathered consilient research findings from dozens of disciplines that clearly support the correlation of human well-being by promoting the balanced emergence of moving “toward” and leading in a more harmonious in-between range, an ongoing integrative flow found in healthy living systems.

Ponder the moment a shared work team accomplishment is announced: physiological and emotional responses to the news surge through members’ brains and bodies as the energy and information is shared among the leader and team members through what Cozolino (2014) calls the social synapse or “the space between us” (p. xv). The shared energy and information are then taken within, through the senses, and can be measured in electrochemical signaling, blood flow, and more. The subjective experience of this integrative sharing might be feelings of personal satisfaction and a sense of resonant warmth between team partners, while the success and the felt sense and storied memories of that moment will be added to their ongoing narrative about themselves, the team, and their work. The integrative and emergent team leader can mine the potential of times like this, working with the flow of energy and information to facilitate an increase in trust and confidence, resulting in the team feeling safer, more connected, and ready for more creative risks.

These three interconnected primes of human experience create an “emergent triangle” (Siegel, 2010; Siegel, 2012a; Siegel, 2012b), and human well-being is found in the integration that emerges through the ever dynamic process of differentiation and linkage within and between each prime, represented as each point of the triangle of human experience (Siegel, 2012a; Siegel & Pearce-McCall, 2009). When defined in the direction of health, found in resonant and respectful relationships, coherent minds, and integrated nervous systems, the Triangle of Well-Being (Figure 1) offers a visual metaphor that illuminates internal, interpersonal, and systemic processes within organizations, and can be quite useful for leaders learning and embodying how to lead instead of developing specific skills about what to do. In other words, to use a common analogy, this approach teaches leaders how to fish rather than giving them the fish (Goleman & Siegel, 2016). When ongoing integration and emergence is created in all these levels, we will invariably find healthy systems, with qualities that are flexible, adaptive, coherent, energized, and stable (easily recalled through the acronym FACES; Siegel, 2012a). In much of the available literature and webinars that discuss IPNB in leadership, integration is considered to be foundational, giving us a way to foster the well-being of leaders, individuals in the workplace and teams, entire organizations—even cultures and countries (Goleman & Siegel, 2016; Pearce-McCall, 2010; Pearce-McCall, Hill, & Olson, 2017; Siegel & Pearce-McCall, 2009).[Content protected for subscribers only]