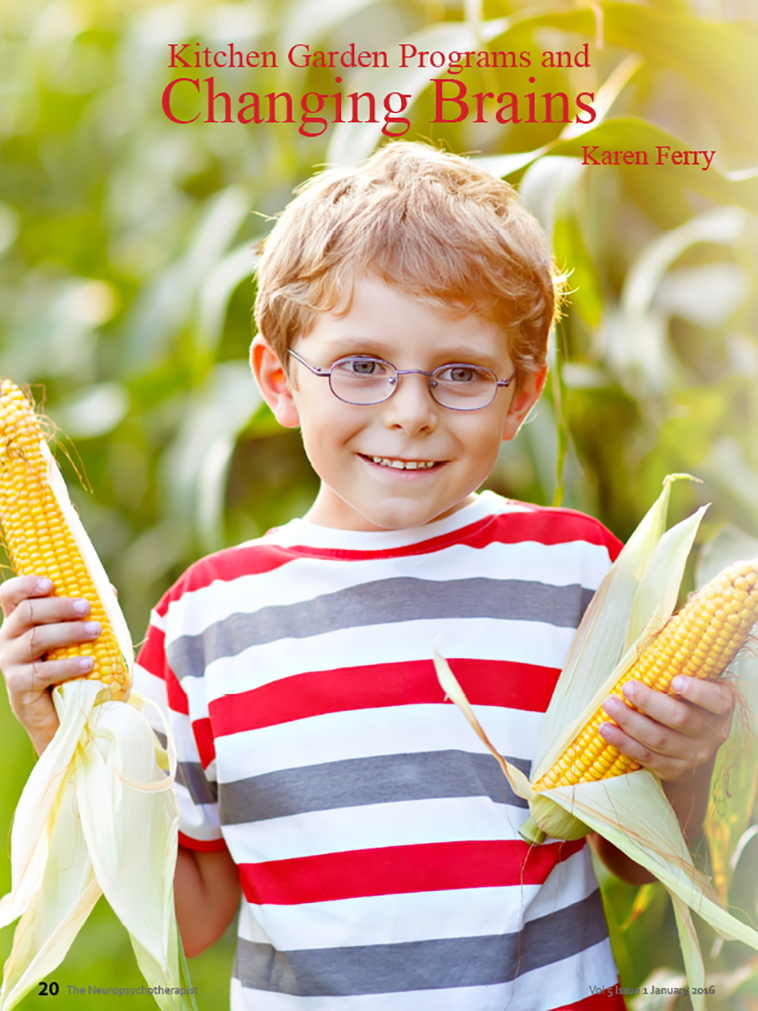 Neuroscience research advocates the necessity of children spending time away from artificial light and outdoors, stating fresh air and sunshine are vital elements to enhance brain development and help balance brain functions (Laakso, Porkka-Heiskanen, Alila, Peder, & Johansson, 1988; Nedley, 2009. Along with being outside is the importance of exercise, which is vital for the production of essential neurochemicals that assist with stress reduction, positive mood, sleep hygiene, and general well-being (Henson & Rossouw, 2012; Kendler, 1996; Nedley, 2009).
Due to the success of the Stephanie Alexander Kitchen Garden Program (www.kitchengardenfoundation.org.au; see Alexander, 2009; Block et al., 2012; Brien, 2014), it was hypothesised that a similar program could be beneficial in a therapeutic day program to enhance the mental and physical health of children currently in foster care who have experienced abusive trauma. The aim of the study was to determine the usefulness and reliability of such a program in terms of the behaviours and emotional regulation of children who have a predisposition to heightened behaviours when memories are triggered.

Care of Abused Children
Children who have experienced an environment of abuse and neglect are some of the most vulnerable and needy in society (Howard, 2013). Their basic needs have been violated, resulting in insecure attachments (Grawe, 2007), and the child is left feeling highly vulnerable and without trust due to the insecurity and harm they have experienced from significant adults (Howard, 2013; Krueger, 2013). The violation of safety significantly affects the wellness of a young developing brain (Jensen & Nutt, 2015) and leads to the adoption of brain schemas of protection, played out either as withdrawal and disassociation or as hyperarousal, high anxiety, and demanding behaviours when memories are triggered (Grawe, 2007; Howard, 2013; Rossouw, 2014). In these circumstances, inner resilience can be significantly impaired, impacting emotional self-regulation and the capacity for successful socialisation (Howard, 2013).

Child safety organisations commonly recognise that in order to protect children from domestic abuse there is a duty of care to remove the child or children from the abusive situation and place them in a foster home (Fisher, Kim, & Pears, 2009; Maher et al., 2009). However, even in a safe foster home––an environment that can help remediate the effects of maltreatment—many children still feel anxious and unsettled (Fisher et al., 2009). Although abused, such children feel a level of sadness living apart from their biological parents and siblings, with many experiencing placement instability as a result of a mismatch of a carer with a child. These situations can result in multiple foster placements, requiring repeated adaptions by the child, and resulting in unintended negative consequences (Chaffin & Friedrich, 2004; Fisher et al., 2009).

Recognising that traumatised children in foster care have a higher risk of poor developmental, psychosocial, and mental health outcomes (Fisher et al., 2009), programs have been set up in order to assist and support children who have been subjected to abuse (Macmillan et al., 2009). One such program involved introducing a gardening and cooking component to therapy sessions. A kitchen garden program not only teaches children important life skills, but a garden environment is also recognised as being a positive setting to calm and down-regulate heightened emotions (Block et al., 2012; Capaldi et al., 2015).

The physical and mental benefits of children and adults getting outdoors cannot be overstated (Capaldi et al., 2015; Fenwick, 2012; van Praag, Fleshner, Schwartz, & Mattson, 2014). Fresh air and exercise assist in the treatment of anxiety, panic disorder, depression, and anger (Kruger et al., 2010; Nedley, 2009). Exercise and fresh air stimulate the production of brain-derived neurotropic factor (BDNF), a vital neurochemical needed for down-regulating the stress response and relaxing the impulsive brain (Doidge, 2015; Etherington, 2012; Henson & Rossouw, 2013); and sunlight is an important source of Vitamin D, which is needed for the production of melatonin that can assist in relaxation and sleep (Nedley, 2009; Thomas, 2014).

Purchase The Teacher's Essential Guide to the Brain from Amazon

Researchers have also discovered that sunshine and soil microbes boost serotonin production (Paddock, 2007). Serotonin is essential for strengthening immunity, improving mood disorders, and reducing anxiety and depression (Etherington, 2012; Nedley, 2009; Thomas, 2014; Wilson, 2014), and the friendly bacteria in soil may act in a similar way to antidepressants (Paddock, 2007).

While it could rightly be argued that taking a walk or playing outside would have the same physiological effect, the added advantage of a kitchen garden program is that it engages all the senses and evokes an enchanted curiosity in things that sprout, grow, and produce something edible. In their evaluation of the Stephanie Alexander Kitchen Garden Program, Karen Block and colleagues (2012) convey the enjoyment the children feel coupled with the development of a healthy sense of pride and satisfaction as garden produce is harvested. Responsibility is nurtured while children care for the growing plants, and enthusiasm is heightened when children harvest and transform the produce into delicious food (Alexander, 2009; Holden, (2008).

The activity of gardening incorporates exercise and play (Etherington, 2012). Many children live sedentary lifestyles with a growing dependence on screen time often used to give parents and carers a break from difficult children (Must & Tybor, 2005). If children are not engaged in team sports, they baulk at suggestions of doing exercise and quickly lose stamina when attempting it. On the other hand, a garden provides a perfect opportunity for children to get offline and outdoors (Thomas, 2014). Ideally, a kitchen garden program will foster long-term interest so that exercise and outdoor activities become a natural part of daily life.

One must acknowledge that the success of a kitchen garden program goes well beyond the program itself. While there is enjoyment and satisfaction in growing fresh produce, it is the ability to maintain a safe, nurturing, and affirming environment that contributes to the positive emotional experience for the children. Rossouw (2014) highlights the importance of a safe and nurturing environment for any learning to take place. This is especially relevant in the case of children who have experienced abuse, and who often struggle to connect with others and build trusting relationships as a result (Geldard, Geldard, & Foo, 2013). Working as a team in a garden program helps build social connections with peers, and turn-taking and sharing skills are enhanced (Block et al., 2012).

Connecting with the earth and nature can assist in mindfulness-based techniques that help children understand they can control their thoughts and their behaviours (Thomas, 2014). Aside from the curiosity outdoor gardening activities evoke, many lessons can be drawn from nature. For example, seeing how nature adapts and adjusts to changes in seasons can be applied to childhood situations of loss, trauma, and recovery (Bilton, 2014; Thomas, 2014).

Children who have suffered trauma may find learning difficult as a result of being in a hyperalert state most of the time (Cozolino, 2013; Howard, 2013). Current research suggests that stress is down-regulated when children are engaged in natural forms of exploration (Thomas, 2014), and a kitchen garden environment can provide a sense of relaxed safety (Blair, 2009; Block et. al., 2012). The program is seen as a pleasurable adventure (Block et. al., 2012), stimulating the release of serotonin, associated with relaxation and calm feelings (Wilson, 2014), and the motivating neurochemical dopamine, both of which open neural pathways and a readiness to learn (Henson & Rossouw, 2013; Rossouw, 2014). There is a cumulative positive effect of self-esteem enhancement as children are affirmed and given opportunities to engage in the garden and cooking processes (Blair, 2009).

Putting Theory Into Practice
The author was involved in a recent study that tested the literature and evaluated the effectiveness of a kitchen garden program for children in a therapeutic day program (TDP). The aim of the study was to determine the usefulness and credibility of a kitchen garden program as it relates to behaviours and emotional regulation for children in foster care, and whether heightened children would down-regulate when in the garden environment. Routinely collected clinical notes, written after each session by the staff involved in various aspects of the program, formed the data that was then evaluated, using a qualitative thematic analysis. It was recognised that there were significant limitations to the study in regards to the number of participants and time frames. A more comprehensive study would need to include a range of therapy environments across broader populations and include an evaluation of the transferrable benefits of the cooking and gardening program when a child was in their routine school or home environment. However, despite the limitations, there were interesting and informative findings to be considered when analysing the effectiveness of a kitchen garden program as a tool to help children who have suffered abuse and trauma.

This has been an excerpt from Kitchen Garden Programs and Changing Brains. To read the full article, and more excellent material for the psychotherapist, please subscribe to our monthly magazine. 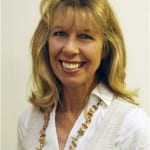 Karen Ferry has been a teacher for over 30 years in both primary and secondary classrooms, and has worked extensively for distance education students assisting in the development of curriculum and activity-based programs. She is a Master of Counselling candidate at the University of Queensland.