Jymmin: How a combination of exercise and music helps us feel less pain 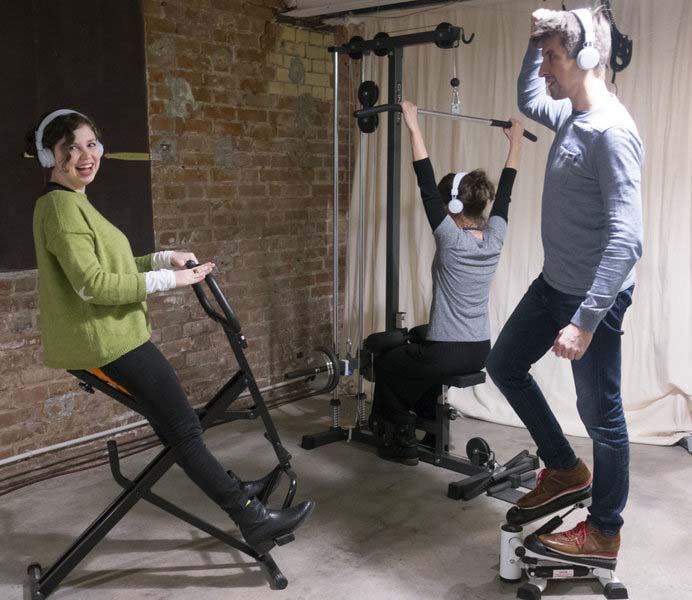 Pain is essential for survival. However, it could also slow the progress of rehabilitation, or in its chronic form could become a distinct disorder. How strongly we feel it, among other factors, depends on our individual pain threshold. Scientists at the Max Planck Institute for Human Cognitive and Brain Sciences (MPI CBS) in Leipzig discovered that a new fitness method they developed increases our pain threshold and makes us less sensitive towards physical discomfort: Jymmin interacts with everyday gym equipment to produce music while exercising.

Often, pain emerges as a consequence of disease, injury or intense physical demands. About seven per cent of adults in Germany experience chronic pain and feel constrained by it. There are several options to help manage this. A new alternative to painkillers or heat therapy could be Jymmin, a mixture of working out on gym machines and free musical improvisation, jamming, developed by scientists at the Max Planck Institute for Human Cognitive and Brain Sciences (MPI CBS) in Leipzig. They discovered that this new fitness technology makes us less sensitive to pain.

In Jymmin, fitness machines are modified in a way that movement strength on the abdominal trainer, pull bar or stepper creates a wide range of sounds. Software for music composition developed at MPI CBS and a related sensor system enable users to produce a unique accompaniment from each fitness machine. The exerciser becomes the composer and the machines their instruments.

“We found that Jymmin increases the pain threshold. On average, participants were able to tolerate ten per cent more pain from just ten minutes of exercise on our Jymmin machines, some of them even up to fifty per cent”, says Thomas Fritz, head of research group Music Evoked Brain Plasticity at MPI CBS. From previous studies the neuroscientist already knew that sports in general increases our pain threshold. “Jymmin showed these effects to be even stronger compared to normal workouts”, Fritz states. After Jymmin, the participants were able to immerse their forearm into ice water of one degree Celsius for five seconds longer compared to a conventional exercise session.

“We found that Jymmin increases the pain threshold. On average, participants were able to tolerate ten per cent more pain from just ten minutes of exercise on our Jymmin machines, some of them even up to fifty per cent.”

Scientists working with Fritz think one of the main reasons for this might be the increased release of endorphins: the higher their level, the more tolerant we are to pain. The combination of physical exertion and making music seems to trigger the release of endorphins in a particularly efficient way.

Interestingly, the effect size was dependent on the individual experience of pain. The scientists had divided the twenty-two participants according to how they rated pain. Indeed, the participants with the highest pain threshold benefitted the most from this training method. This could be due to their already more effective release of endorphins in comparison to those who are more pain sensitive.

“There are several possible applications for Jymmin that can be derived from these findings”, the neuroscientist says. It could help alleviate pain in sufferers of acute or chronic pain, for example. These machines could especially deliver valuable support in rehabilitation clinics by enabling more efficient training. “Patients simply reach their pain threshold later.” A current study with chronic pain patients furthermore seems to imply that Jymmin can also reduce anxiety, a contributor to chronic pain.

On the other hand there are top athletes who strive to achieve highly demanding physical performances and want to increase their pain thresholds. Preliminary investigations on top swimmers in South Korea showed that athletes who warmed up using Jymmin machines were faster than those using conventional methods. In a pilot test, five of six athletes swam faster than in previous runs.

Several former studies have demonstrated that Jymmin has many positive effects on our well-being. They revealed that not only is less effort in sports and exercise required to reach the same result, but also that personal mood and motivation is improved. Even the music itself—produced by their Jymmin—was perceived as pleasant, although not described as their personal music taste.