Jeopardizing Your Wife to Prove a Point: Pellagra as an Example of Deficit

One of the comments from a reader of a previous post mentioned Joseph Goldberger, MD, and the very important work he did on niacin as a treatment of psychosis due to pellagra. It is such a fascinating story that we thought we would share it with readers who are following our series on Nutrition and Mental Health. This story is one of the few exceptions to the point we made in our previous post: that it is unlikely for a single nutrient to have a profound effect on a serious mental health condition.

Pellagra (meaning rough skin) was apparently first described in 1735 by a Spanish physician, Don Gasper Casal, and was called “mal de la rosa”, due to the characteristic red rash on the hands and feet. At the time, the cause was unknown but it was associated with poverty. Cases in the US were first reported in the early 1900s, where there was a pellagra epidemic in the southern US. Although linked to the poor person’s diet (often consisting mainly of corn products), the going wisdom at that time was that it was contagious (Pellagrans, as they were called, tended to live in close proximity) and was perhaps hereditary (sound familiar?).

The relevance of pellagra to psychiatry is that it also can present with psychosis, obsessions, mania, depression and confusion. It involves the main organs of the brain, the gut and the skin – many referred to the 4 Ds: dementia, diarrhoea, dermatitis and death. 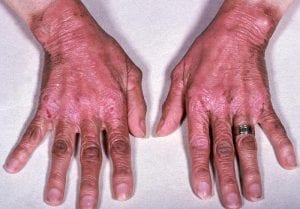 In 1914, Joseph Goldberger, a physician and clinical epidemiologist, was invited to investigate the epidemic. Careful reviews of the literature and cases indicated to him that pellagra was a dietary disease, not an infectious one. Only poor people seemed to get it and they often had a diet that consisted of Indian corn. Cases were being reported in hospitals whereby the patients, mainly eating a monotonous corn-based diet, would get the disease whereas the nurses, despite daily contact with the patients, would not. The nurses apparently received a more nutritious diet. Outbreaks appeared in mental institutions, orphanages, and cotton mill villages where the diet was considered a monotonous 3M diet – molasses, meat and cornmeal. Similarities with European pellagra led many to conclude that the disease was caused by spoiled corn.

Following his theory that the disease was a dietary one, Goldberger began running “trials” in different orphanages by manipulating their diets: those given fresh meat and legumes experienced no recurrence of pellagra. He also conducted experiments in which he showed he could induce pellagra in healthy men (usually prisoners) by feeding them a corn-based diet. Through observation and controlled experiments, by the 1920s Goldberger had established that pellagra was a disease of a faulty diet caused mainly by extreme conditions of poverty.  These experiments convinced him that infection was not the form of transmission and in the early 1920s he began to search for the specific nutritional deficiency.

The part that we really like about this story is that Goldberger was so confident in his theory of pellagra’s etiology that he was willing to risk sacrificing his wife’s health to prove it. Despite his repeated controlled experiments using diet manipulation, many authorities did not believe his theory and people continued to hold to the prevailing wisdom that it was infectious. And so he found 16 volunteers (his wife being one of them) and exposed them all to the blood, urine, faeces, and epidermal scales of pellagrous lesions and not a single one of his volunteers developed pellagra (or else we might not be telling you this story). Goldberger spent the rest of his career and life trying to isolate the ingredient that was causing the condition. Although he died before figuring it out, it wasn’t long before another scientist, Conrad Elvehjem, determined that niacin was the essential dietary factor.

Fortification of food with niacin did not occur until 1941. It was estimated that there were over 3 million cases and over 100,000 deaths in America in the 40 years until its true cause was determined.

The impact of Goldberger’s discoveries has to be understood in terms of the incredibly high prevalence of this problem: it has been estimated that fully 1 out of 5 people admitted to mental hospitals in the 1930s were there solely because of pellagra psychosis, an easily preventable/treatable nutrient deficiency. And also, returning to our previous blog on the wisdom of our ancestors, until pellagra was essentially eradicated by fortification of foods with niacin, the Diagnostic and Statistical Manual (DSM) acknowledged that nutritional deficiencies could cause mental symptoms: “psychosis with other metabolic or nutritional disorders (including pellagra)”. It is interesting that the current edition of the DSM no longer refers to metabolic disturbances as etiological factors.

But we leave the reader with this thought:  while niacin therapy has been accepted now for the eradication of pellagra and pellagra-psychosis, is it not possible that a combination of nutrients may have had far superior effects more broadly? And if Walter Mertz was correct when he declared in 1994 that the era of one-nutrient, one-disease was over, what other mental symptoms might be eradicated with combinations of nutrients as treatment?

For those who would like to read further about this important historical discovery: