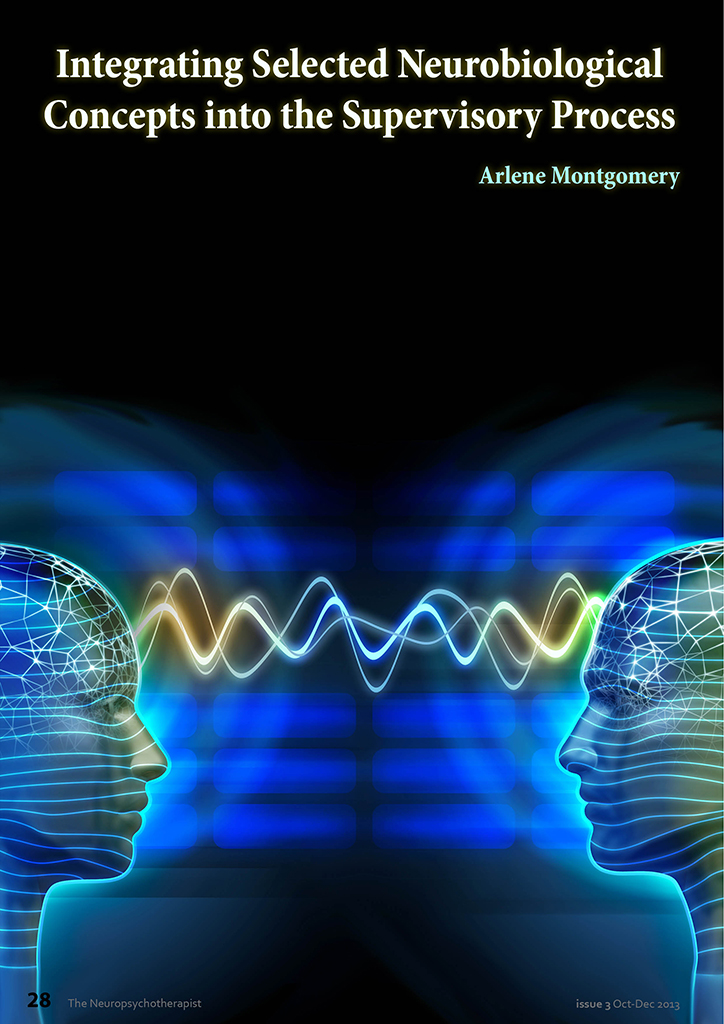 In preceding chapters of Arlene Montgomery’s Neurobiology Essentials for Clinicians (Montgomery, 2013),  selected  foundational  concepts  were  described and illustrated with case material. These concepts include the functions of certain parts of the brain that affect physiological arousal (bodily and affective); the significance of understanding adaptive and maladaptive ways a person’s brain manages arousal or the lack thereof, using the concept of defense mechanisms; and ways the interactions between the brains of two or more persons are biologically programmed to perceive threat and how that capacity might develop into adaptive or maladaptive coping responses. Here, in this final chapter, Montgomery has a focus on two defense mechanisms—projective identification and dissociation—as a way to explore how the transfer of affect and other experiences may occur, both in the clinical encounter (in this case, between the supervisee intern and the client) as well as in the supervision process (between the supervisee and the supervisor)...

The academic aspects of teaching clinical theories and technique, though critical to the acquisition of skills to address the treatment of mental health issues, is beyond the scope of this chapter. Of interest to us here are those neurobiological phenomena that may have a profound effect upon the ongoing development of the professional use of self. Of course, these phenomena may heavily impact academic teaching as well, but the illustration is confined to the supervision process for clinical work with persons who have mental health issues.

Clinical supervisors (and teachers) in the mental health field should help their supervisees (and students) bear difficult emotions, wishes, thoughts, and other reactions (McWilliams, 2004, p. 299). Many contemporary therapeutic modalities that favor a cognitive–behavioral approach do not emphasize the clinician’s reaction to the therapeutic situation as a source of information, but rather as, perhaps, the student’s or therapist’s personal problem, if it is addressed at all. Other modalities maintain the idea that clinicians should strive for a nonresponsive facial and body language reaction to their clients— something that is almost impossible, as recent findings in child development and related fields have clearly addressed (Aron, 1991, 1992; Greenberg, 1991; Hoffman, 1983; Lachmann & Beebe, as cited in Moskowitz, Monk, Kaye, & Ellman, 1997; Siegel, 2003).

In addition, the neurobiological underpinnings of adaptive and defensive projective identification (object constancy perhaps being a special case of projective identification), transference, and countertransference are briefly described, and material from a session between the supervisee and the client is examined for illustrations of these clinical constructs. To illustrate the parallel process in supervision, a sample of the supervision discussion also is examined.

As most supervisors find, a parallel process can occur between the supervisee and supervisor that mirrors some of the dynamics or experiences in the clinician–client relationship (Feldman, as cited in Parad & Miller, 1963, pp. 299–306; Hamilton, as cited in Parad, 1958, p. 34–35; Kottler & Blau, 1989, pp.72–72, 99–103; Weissman, Epstein, & Savage, 1983, pp. 242–243). In the case illustration that follows, the social work intern was excited and interested in learning about the practical application of the neurobiological underpinnings of the therapeutic relationship.

The intern is a serious, bright, talented young woman whose undergraduate major had been Spanish literature and education. I have found myself favorably biased toward those who come to the mental health professions with such a background. Their disciplined deconstruction of the narrative line of a story, speculating on the motivations(s) of the characters, and generally drenching themselves in the experiences literature offers can often put them far ahead of others. There is a close similarity between the way literature is studied today and the clinical skill necessary to understand the themes and templates addressed in psychotherapeutic work.

However, teaching a right-brain approach to those accomplished in the left-brain academic world can become a challenge. The current mental health treatment climate has a heavy emphasis on “doing” something or reaching a preset “goal,” both of which are clearly more left-brain endeavors. With the limited time that managed care currently allows for mental health care, the structure implicit in goal setting is inevitable—and not necessarily negative. However, learning about and appreciating the clinical intricacies of the brain-to-brain connections are often lost in the interest of the time pressure imposed by third-party payors’ severe limits on number of sessions (e.g., 4–10 sessions for serious psychiatric diagnoses). However, preserving the value of the treatment alliance does not have to be abandoned with fewer sessions. There need not be a choice between “doing” something versus creating a connection with the client, which in itself has the potential to become therapeutic. Certainly there is ample evidence that the treatment alliance is a most important curative factor, regardless of the treatment modality (O’Neill, 2002), so anything that promotes such an alliance is valuable.

Always trying to privilege the therapeutic alliance in my own practice, I have struggled not to prematurely interpret, not to hunt for the affect management strategies of clients but to let them emerge, yet to find ways to apply the research findings (a left-brain endeavor) about the ways that two right brains synchronize. I have been trying to teach a subtle point: that the ambient atmosphere that can occur when two right brains are in synchrony can set the stage for an encounter that can be therapeutic. Conversely, when the two right brains are asynchronous (e.g., not in “sync” or not “clicking”), barriers to therapeutic progress may occur. The approach described in this chapter is about “being with” or “not being with” and the neurobiological consequences of those moments between clinical dyads—the client–therapist dyad as well as the therapist–supervisor dyad.

One way that I sometimes work with a supervisee is to go over almost verbatim material. We try to both think and feel our way through the exchanges, both the verbal and nonverbal. I sometimes find myself talking too much when I should just let the two of us let our left and right brains have some space to unhurriedly work out the kinks in our considerations. Some- times, supervisees avoid my eye contact, or vice versa, when the encounter becomes too intense, or at times, too sad. Sometimes there is some kind of asynchrony between us and I worry that a supervisee is indulging my excited, maybe long-winded, teaching. Sometimes I think to stop us and ask how this is going for him or her. Sometimes I only think of that in the car going home, chagrined! Sometimes I feel incompetent, especially when at my most “brilliant.” Other times, there is a delicate moment that just happens, and we seem to know that the climate for the teachable moment has occurred. Like a soap bubble, it pops and we go on. We do, somewhat awkwardly, try to talk about those times, though probably not often enough. It is very hard. And always I feel like I learned a lot, always hoping that the supervisee did, as well.

To move to the details of the process for deconstructing the clinical issues and highlighting the neurobiology of case material, it is helpful to refer to copies of the defense mechanisms and their brief definitions. The definition of terms (e.g., attunement),and the schematic of the human nervous system noting the functions under study are useful, too. For the case of Mary considered in this chapter, the functions of the autonomic nervous system and related constructs are then examined. However, projective identification and dissociation are the focus, particularly because these defensive maneuvers affect transference and countertransference and the parallel processes in supervision. Finding examples of behaviors that seem to illustrate neurobiological constructs can be tedious and daunting, at times. Though the following exercise in speculating about some of the neurobiological actions that may undergird the therapeutic encounter can be done alone, it is recommended to work with others, especially when first attempting to apply neurobiology to interpersonal encounters. However, before addressing the case material, the following sections define and briefly discuss adaptive and defensive projective identification, transference, and countertransference.

This has been an excerpt from Integrating Selected Neurobiological Concepts into the Supervisory Process. To read the full article, and more excellent material for the psychotherapist, please subscribe to our monthly magazine.