An Ontological Block to Understanding Consciousness 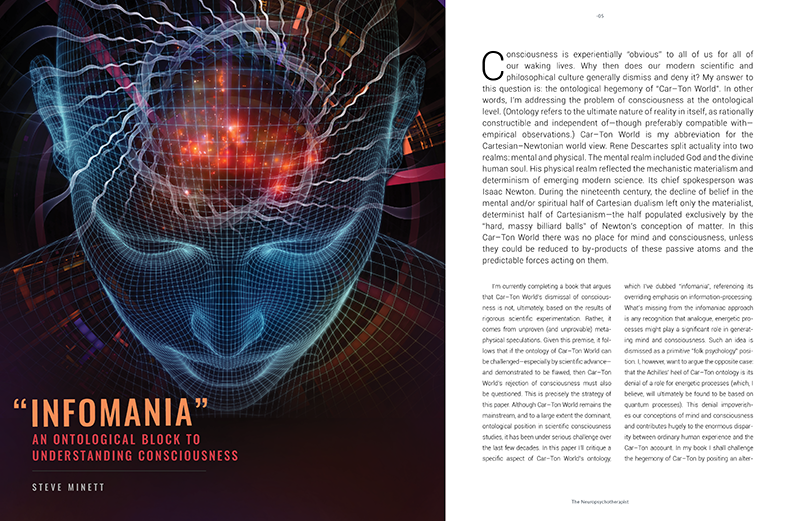 Consciousness is experientially “obvious” to all of us for all of our waking lives. Why then does our modern scientific and philosophical culture generally dismiss and deny it? My answer to this question is: the ontological hegemony of “Car–Ton World”. In other words, I’m addressing the problem of consciousness at the ontological level. (Ontology refers to the ultimate nature of reality in itself, as rationally constructible and independent of—though preferably compatible with—empirical observations.) Car–Ton World is my abbreviation for the Cartesian–Newtonian world view. Rene Descartes split actuality into two realms: mental and physical. The mental realm included God and the divine human soul. His physical realm reflected the mechanistic materialism and determinism of emerging modern science. Its chief spokesperson was Isaac Newton. During the nineteenth century, the decline of belief in the mental and/or spiritual half of Cartesian dualism left only the materialist, determinist half of Cartesianism—the half populated exclusively by the “hard, massy billiard balls” of Newton’s conception of matter. In this Car–Ton World there was no place for mind and consciousness, unless they could be reduced to by-products of these passive atoms and the predictable forces acting on them.

I’m currently completing a book that argues that Car–Ton World’s dismissal of consciousness is not, ultimately, based on the results of rigorous scientific experimentation. Rather, it comes from unproven (and unprovable) metaphysical speculations. Given this premise, it follows that if the ontology of Car–Ton World can be challenged—especially by scientific advance—and demonstrated to be flawed, then Car–Ton World’s rejection of consciousness must also be questioned. This is precisely the strategy of this paper. Although Car–Ton World remains the mainstream, and to a large extent the dominant, ontological position in scientific consciousness studies, it has been under serious challenge over the last few decades. In this paper I’ll critique a specific aspect of Car–Ton World’s ontology, which I’ve dubbed “infomania”, referencing its overriding emphasis on information-processing. What’s missing from the infomaniac approach is any recognition that analogue, energetic processes might play a significant role in generating mind and consciousness. Such an idea is dismissed as a primitive “folk psychology” position. I, however, want to argue the opposite case: that the Achilles’ heel of Car–Ton ontology is its denial of a role for energetic processes (which, I believe, will ultimately be found to be based on quantum processes). This denial impoverishes our conceptions of mind and consciousness and contributes hugely to the enormous disparity between ordinary human experience and the Car–Ton account. In my book I shall challenge the hegemony of Car–Ton by positing an alternative ontology based on a number of interpretations of quantum physics and the ontology developed by Alfred North Whitehead in Process and Reality (1929).

Daniel Dennett (1991) and Steven Pinker (1999) are leading spokespersons for infomania. Let’s first take a quick look at the cognitive computationalist, information-only position that Dennett and Pinker are defending. Cognitivism is a theoretical framework for understanding the mind that gained credence in the 1950s. It was a response to behaviorism, which cognitivists said neglected to explain cognition, defined as how people perceive, think, remember, learn, solve problems, and direct their attention to one stimulus rather than another. Behaviorists acknowledged the existence of thinking, but identified it as a behavior. Cognitivists argued that the way people think impacts their behavior and therefore cannot be a behavior in and of itself. Methodologically, cognitivism adopts a positivist approach, claiming that psychology can, in principle, be fully explained through experiment, measurement, and the scientific method. Cognitivism is also largely reductionist, believing that individual components of mental function (the cognitive architecture) can be identified and meaningfully understood. The theoretical component claims that cognition consists of discrete, internal mental states (representations or symbols) whose manipulation can be described in terms of rules or algorithms. Cognitivism is not a wholesale refutation of behaviorism, but rather an expansion that accepts that mental states exist. This was due to the increasing criticism, toward the end of the 1950s, of behaviorism’s simplistic learning models. Cognitivists typically presuppose that the human mind or the human brain (or both) is entirely based on information processing, and that thinking is simply a form of computing. In other words, the brain is a “bio-computer”, and the mind is generated by the programs it runs.

My first example of a flawed Car–Ton-ist argument is Dennett’s response to Frank Jackson’s famous (1982) thought experiment addressing the problem of color qualia. This runs as follows: Mary is a brilliant scientist who is forced to investigate the world from a black-and-white room via a black-and-white television monitor. She specializes in the neurophysiology of color vision and acquires all the physical information that can possibly be obtained about what goes on when we see colors. What will happen when Mary is released from her black-and-white room? Will she learn anything new or not? Dennett (1991) says no, she won’t learn anything new. He stresses the experiment’s premise that she has all the physical information. This is difficult to imagine, so people assume either that she knows lots and lots, or that she knows everything that science today knows, which is actually almost nothing. If this were all she knew, then yes, maybe Mary would learn something on first seeing color. However, if she knows everything, then she knows beforehand exactly what physical impression any color would make on her nervous system. Dennett insists that it’s Mary’s perfect knowledge of the neurophysiology of color vision that guarantees her lack of surprise. This is what trips people up: “In any any realistic, readily imaginable version she might know a lot, but she would not know everything physical” (Dennett, 1991, p. 400). Dennett illustrates this point via the metaphor of imagining that Mary is “filthy rich” versus the hypothesis that she owns everything.
The spurious sense of “obviousness”, which denies this and claims that she must learn something new, is (says Dennett) a great obstacle to progress in understanding consciousness: “It is the most natural thing in the world to think of consciousness as occurring in some sort of Cartesian Theatre, and to suppose that there is nothing really wrong with thinking this way” (Dennett, 1991, p. 434). But, he claims, this obviousness disappears if you look carefully and in detail at the brain’s actual activities, and try to imagine an alternative to this simplistic model of consciousness. Dennett invokes the metaphor of a stage magician performing a conjuring trick where “once we take a serious look backstage, we discover that we didn’t actually see what we thought we saw onstage” (p. 434). These insights can shrink the huge gap between phenomenology and physiology, and we can see that some “obvious” features of phenomenology are not real at all:

There is no filling in with figment; there are no intrinsic qualia; there is no central fount of meaning and action; there is no magic place where the understanding happens. In fact, there is no Cartesian Theatre. . . . The most mind-boggling special effects just don’t exist at all, and hence require no explanation. (p. 434)

It seems to me (and I suspect most other people, including the eighteenth-century philosopher David Hume) that Dennett is making (perhaps willfully) a fundamental mistake about certain obvious facts of human experience—namely, the difference between knowing something intellectually and having an immediate, personal experience of it. I’m going to claim, along with Hume, that no matter how much information you have (even if you have all the information that it is possible to have), there’s an insurmountable difference between knowing something intellectually (i.e., based on information about it) and feeling something by direct experience of it. I feel that Dennett is able to be disingenuous in his analysis of Mary’s story precisely because our knowledge about color and our qualic experience of color are hard to disentangle and so are easily confused. But what if we choose to reconsider this thought experiment having substituted the experience of extreme pain instead of the experience of seeing colors?

Severe Pain Instead of Color

So, let’s rewrite the Mary thought-experiment, though this time substituting for the calm, neutral experience of seeing color, the extreme experience of receiving a severe electric shock. We could imagine her as a medical student researching every aspect of pain reactions from a neurophysiological point of view. She might finally understand, in exquisite detail, all the neural processes that a normal human being would experience while receiving a severe electric shock. (As with the color experiment, let’s just assume that it’s possible to acquire complete knowledge of this sort.) But would this knowledge enable her to feel the same pain as the person who is actually receiving the shock? In other words, would any amount of intellectual knowledge of these processes make Mary howl in pain? So what can we learn about Car–Ton-ist cognitivism from Dennett’s response to this thought experiment? The principal lesson is that Dennett does not make a distinction between knowledge (or information) and experience (or feeling): all operations in the brain and all products of those operations, are conducted in, or take the form of, information processing.

In cognitivism, the term information processing means the manipulation of physical symbols in the brain by means of algorithmic rules, resulting in the deduction of logical inferences. That’s why, according to cognitivism, Mary learns nothing new about color—she’s already processed all the information and made all the right inferences. This cognitivist way of seeing brain function is closely linked to the idea that the brain is very similar to, and amounts to nothing more than, a computer. We can now revisit the Mary thought experiment, with the focus this time on pain as the qualic experience: by pre-experience Mary would have all the propositional information that there is as to how an electric shock affects the human nervous system; but until she is wired up and the power is turned on, she wouldn’t have had the experience of what such a shock feels like in analogue, energetic terms. Consequently, she would learn something new from actually experiencing the shock. Incidentally, Dennett (cited in Minsky, 2006, p. 67) has also denied the reality of pain:

If you can make yourself study your pains (even quite intense pains) you will find, as it were, no room left to mind them: (they stop hurting). However, studying a pain (e.g., a headache) gets boring pretty fast, and as soon as you stop studying them, they come back and hurt, which, oddly enough, is sometimes less boring than being bored by them and so, to some degree, preferable.

I, along with most people who have actually experienced a severe electric shock, would profoundly disagree with these claims.

Steve Minett was educated at the universities of Sussex, Oxford, Minnesota, and Stockholm. He holds five university degrees, including a PhD from Stockholm. He taught for four years at a study-abroad program at the University of Stockholm. He later developed a career in international marketing, working for many multinational companies, eventually setting up his own agency. He became financially independent in 2004 and has since devoted himself to the study of theories of consciousness: his website (below) contains 200+ clips on the subject, plus recordings from 100 relevant books, all freely downloadable: https://consciousvm.wordpress.com