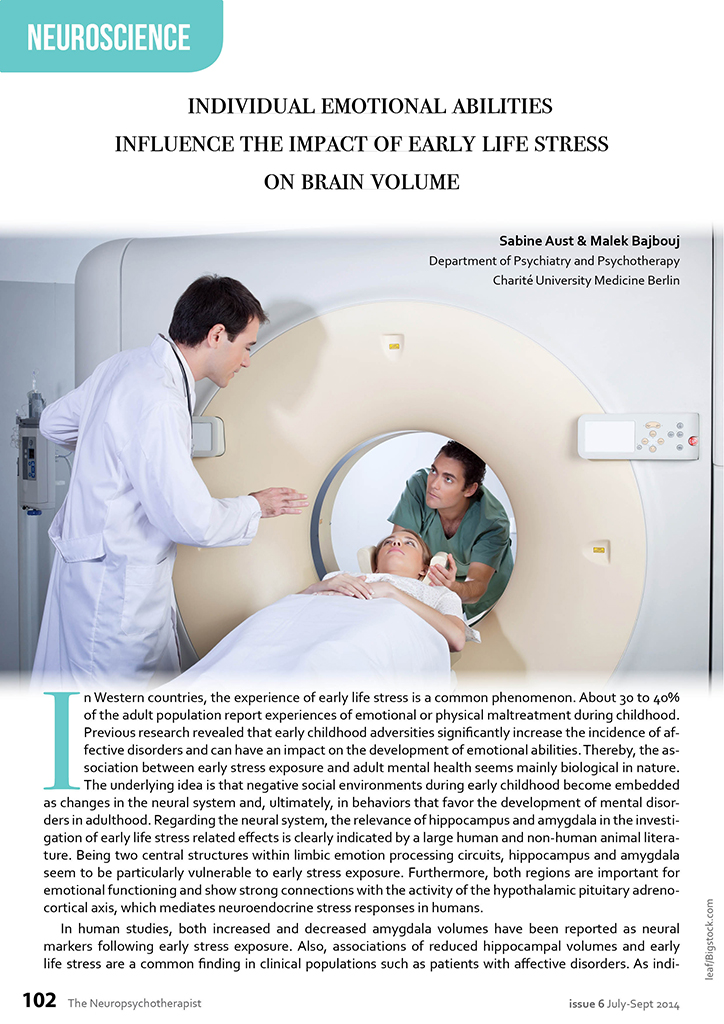 In Western countries, the experience of early life stress is a common phenomenon. About 30 to 40% of the adult population report experiences of emotional or physical maltreatment during childhood. Previous research revealed that early childhood adversities significantly increase the incidence of affective disorders and can have an impact on the development of emotional abilities. Thereby, the association between early stress exposure and adult mental health seems mainly biological in nature. The underlying idea is that negative social environments during early childhood become embedded as changes in the neural system and, ultimately, in behaviors that favor the development of mental disorders in adulthood. Regarding the neural system, the relevance of hippocampus and amygdala in the investigation of early life stress related effects is clearly indicated by a large human and non-human animal literature. Being two central structures within limbic emotion processing circuits, hippocampus and amygdala seem to be particularly vulnerable to early stress exposure. Furthermore, both regions are important for emotional functioning and show strong connections with the activity of the hypothalamic pituitary adrenocortical axis, which mediates neuroendocrine stress responses in humans.

In human studies, both increased and decreased amygdala volumes have been reported as neural markers following early stress exposure. Also, associations of reduced hippocampal volumes and early life stress are a common finding in clinical populations such as patients with affective disorders. As indicated by neurobiological models, a hippocampal volume decrease might result from early exposure to elevated levels of the stress-related corticotropin releasing hormone, which can lead to a degeneration of hippocampal neurons or can even have a direct neurotoxic effect on them. When the effects of early childhood adversities on limbic structures are investigated in the absence of psychiatric disorders, however, results are less clear. A number of studies show early life stress related hippocampal volume reductions in healthy populations, whereas others do not reveal this finding. Given the impact of early life stress on affective functioning, the question arises which additional emotion-relevant variables need to be considered to better understand the effects of early stress exposure on hippocampus and amygdala volume in healthy individuals.

Therefore, a recent study addressed the association between early childhood adversities and brain volume in 50 healthy individuals with high and low degrees of alexithymia, an emotion-relevant personality trait characterized by difficulties in identifying, decoding and communicating one’s own emotional state. To investigate the specific effects of early life stress as a function of alexithymia, high and low alexithymic participants were matched regarding their experiences of early life stress as measured via questionnaire and face-to-face interview. Individual hippocampus and amygdala gray matter volumes were measured via magnetic resonance imaging (MRI).

The data revealed that neither alexithymia nor early life stress exposure had an influence on amygdala and hippocampus volumes when considered independent from each other. However, when considering the interplay of both variables instead, differential interactions of early life stress and alexithymia in hippocampus and amygdala were found: early childhood adversities were negatively associated with right hippocampus gray matter volume in individuals with altered emotional abilities (i.e. high degrees of alexithymia), whereas in individuals with regular emotional abilities (i.e. low degrees of alexithymia) early life stress was positively associated with left amygdala gray matter volume. Age, depression and trait anxiety did not significantly influence these associations.

Interestingly, the study was the first to consider individual emotional abilities as a variable potentially modulating early life stress related effects on structural characteristics of limbic emotion processing circuits. Developmental models suggest that early attachment relationships establish the basis for emotional functioning, i.e. emotional awareness and the ability to express emotions, during childhood. This basis can be disturbed by a child’s exposure to experiences of abuse or neglect, facilitating the development of emotional disturbances such as alexithymia. Following this line of argument, reduced hippocampal volumes in high alexithymic individuals with a history of early life stress could be interpreted as the result of accumulating effects of early stress exposure and low degrees of emotional functioning, since no such effects were found in the absence of alexithymia. As shown in previous human and non-human animal studies, the hippocampus is a slowly developing brain structure with prolonged phases of neuronal proliferation during childhood into adulthood. Therefore, it shows an increased susceptibility to stress but, at the same time, there might also be a longer time frame for protective action. In addition, alterations in the hippocampus are more likely to reverse under enriched environmental conditions. This might explain why the study did not find any association of hippocampal volume and early life stress in the low alexithymic group characterized by high degrees of emotional functioning, implicating the presence of some kind of intrapersonal and/ or environmental protective factors in these individuals.

Finally, the study also raises the question of how emotional abilities interact with individual adaptations to early stress exposure on the neural level and whether there are ways to promote these adaptations, clearly indicating the need for prevention programs. Specifically, the importance of programs targeting the development of emotional abilities in children and young adults exposed to early life stress is emphasized by the present study. Furthermore, future research should focus on the investigation of individuals such as the low alexithymic group with a history of early life stress regarding emotional abilities and coping behavior to shed some light on the development of resilience and health supporting behaviors on multiple levels.