How the Brain Turns Down the Volume on Your Noisy Body

Every minute of every day, your body makes noise. You inhale and exhale. Your joints creak. Many of your own actions, generate sound, but thanks to your brain, you likely hear little of it.

The brain’s ability to recognize and tune out sensory stimuli produced by the body’s own actions — to distinguish ‘self’ from ‘other’ — is a long recognized, yet poorly understood, biological phenomenon. Nathanial Sawtell, PhD, a principal investigator at Columbia’s Mortimer B. Zuckerman Mind Brain Behavior Institute, focuses his research on uncovering how it works.

Dr. Sawtell, who is also professor of neuroscience at Columbia University Medical Center, and his team have largely tackled this issue using an unusual model system — a species of electric fish, called the elephantnose fish, from Africa that both generates and senses electricity. Their studies have revealed important insights into how circuits in the brains of these fish distinguish behaviorally relevant inputs — such as signals generated by prey — from electrical “noise” that the fish generates itself. Now, in a paper published today in Nature Neuroscience, he and his team have gone from the sea to land, examining whether the fish’s noise cancelling mechanisms are also present in mice.

We spoke with Dr. Sawtell about his latest discovery and how his studies of fish and mice could impact our own species.

You’ve spent much of your career studying noise cancellation in the brains of electric fish. What made you turn to mammals, specifically mice? 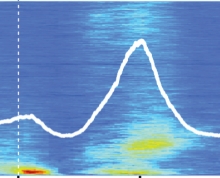 Our research has mainly focused on electric fish because of their unusual sensory and motor capabilities, which make it relatively easy to study how circuits in the brain distinguish between external sensory stimuli (such as those generated by nearby animals) and those generated by the animal itself.

But by focusing solely on a single species we were missing an opportunity. The need to distinguish between self-generated and external sensory stimuli is fundamental across the animal kingdom. Our detailed knowledge of how electric fish could solve this problem placed us in a position to ask whether the solution that they had evolved was common to other animals, or whether evolution had arrived at multiple solutions to the same problem. So we turned our attention to mice, a species separated from electric fish by hundreds of millions of years of evolution.

How does noise cancellation work in the brains of electric fish? And how does this compare to the mouse?

Electric fish contain a structure located in the back of the brain called the electrosensory lobe that receives two types of inputs. The first type are electrical signals — both those emitted by the fish itself and those from its surroundings. The second are signals related to the fish’s own behavior, for example copies of the motor signals that allow the fish to move. By subtracting the second class of signals from the first, the circuit cancels out unwanted, self-generated signals. This is not unlike the circuitry found in “noise-cancelling” headphones.

The result is that the fish can better detect behaviorally relevant electrical signals in the environment, such as a circling predator.

And while the vast majority of mammals, including mice, can’t sense electricity, they do have a structure in their brains similar, anatomy-wise, to the electrosensory lobe. It is called the dorsal cochlear nucleus, or DCN, and is one of the first parts of the mammalian brain to process sound.

Similar to the electrosensory lobe in fish, the DCN in mice receives two types of input: auditory signals from in the inner ear as well as signals that relate to the mouse’s own behavior. Given these similarities between fish and mice, we wanted to test whether the DCN in mice serves the same function as the electrosensory lobe of fish: the ability to cancel out self-generated sounds.

How did you test this hypothesis?

Most studies of the auditory system focus on how the brain processes external sounds, for example vocalizations. We needed to take a different approach and find a way to study sounds that the mouse generates itself. Eventually we settled on the sound a mouse makes when it licks. Licking behavior was a good choice, because it is relatively simple, and makes a sound that we could measure and can be studied at the same time as we recorded the activity of neurons in the brain.

What did your recordings reveal?

Our strategy was to compare responses in neurons in the DCN with those in a nearby brain structure, the ventral cochlear nucleus (VCN).  Both the DCN and VCN structures receive auditory signals from the inner ear, but only DCN receives additional signals related to the mouse’s own behavior. When we played external sounds for the mice, neurons in both the VCN and DCN responded similarly. However, when the mouse generated its own sounds — specifically licking — the neurons in these two structures responded very differently. VCN neurons responded strongly to the sound of the animal’s own licking, while DCN neurons appeared to ignore this self-generated sound. This was an exciting finding for us because it provided the first direct evidence that DCN was actually cancelling out sounds that the mouse made itself.

Further experiments allowed us to dig a bit deeper, and shed light on precisely what was happening in the DCN.

What did your research uncover?

As far as we can tell, the mechanisms that give the fish the ability to cancel out self-generated electrical signals appear remarkably similar to those we find in the DCN of mice. In both cases, it appears that signals related to both the mouse’s own behavior and movements are used to subtract out sounds that are self-generated.

We were actually able to observe this directly by silencing one of the  main sources of behavior-related inputs to DCN. Under these conditions, neurons in the  DCN now responded to the mouse’s own licking sounds.

How can this study inform future research into hearing?

Our results are intriguing, though this is just a first step. One advantage of studying mice is the vast arsenal of genetic tools for identifying the function of specific cell types of the DCN.

For example, we can use genetic tricks to turn specific cell types in DCN on or off and then observe the result, both functionally within the DCN itself, and at the level of the mouse’s behavior. Another important next step we hope to take in this research is to repeat these experiments in the context of a wider range of behaviors beyond licking, such as walking and vocalization.

Eventually, we’re hoping this insight into noise cancellation will shed light on hearing disorders like tinnitus. Tinnitus, or ringing in the ears, is an extremely common and in some cases a debilitating condition that appears to involve hyperactivity in DCN. Intriguingly, phantom sounds, the hallmark of tinnitus, are often impacted by behavior, including movements of the neck or jaw. Our work may provide new ways to test the idea that tinnitus is due to a malfunction of the mechanism that normally serves to cancel out self-generated sounds.