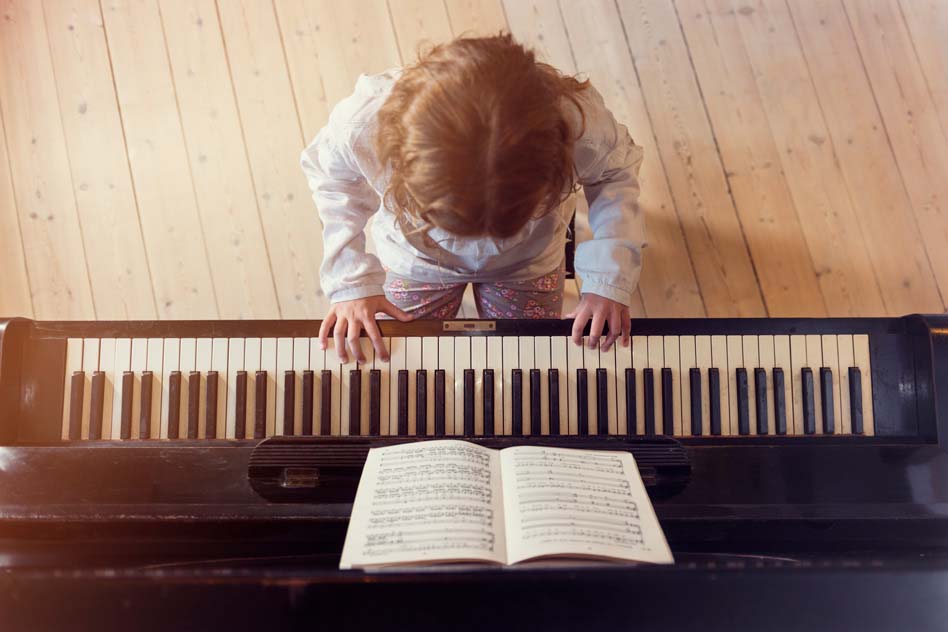 A new study from MIT has found that piano lessons have a very specific effect on kindergartners’ ability to distinguish different pitches, which translates into an improvement in discriminating between spoken words © MIT

Many studies have shown that musical training can enhance language skills. However, it was unknown whether music lessons improve general cognitive ability, leading to better language proficiency, or if the effect of music is more specific to language processing.

A new study from MIT has found that piano lessons have a very specific effect on kindergartners’ ability to distinguish different pitches, which translates into an improvement in discriminating between spoken words. However, the piano lessons did not appear to confer any benefit for overall cognitive ability, as measured by IQ, attention span, and working memory.

“The children didn’t differ in the more broad cognitive measures, but they did show some improvements in word discrimination, particularly for consonants. The piano group showed the best improvement there,” says Robert Desimone, director of MIT’s McGovern Institute for Brain Research and the senior author of the paper.

The study, performed in Beijing, suggests that musical training is at least as beneficial in improving language skills, and possibly more beneficial, than offering children extra reading lessons. The school where the study was performed has continued to offer piano lessons to students, and the researchers hope their findings could encourage other schools to keep or enhance their music offerings.

“That’s a big thing for kids in learning language: being able to hear the differences between words.”

Yun Nan, an associate professor at Beijing Normal University, is the lead author of the study, which appears in the Proceedings of the National Academy of Sciences the week of June 25.

Other authors include Li Liu, Hua Shu, and Qi Dong, all of Beijing Normal University; Eveline Geiser, a former MIT research scientist; Chen-Chen Gong, an MIT research associate; and John Gabrieli, the Grover M. Hermann Professor in Health Sciences and Technology, a professor of brain and cognitive sciences, and a member of MIT’s McGovern Institute for Brain Research.

Previous studies have shown that on average, musicians perform better than nonmusicians on tasks such as reading comprehension, distinguishing speech from background noise, and rapid auditory processing. However, most of these studies have been done by asking people about their past musical training. The MIT researchers wanted to perform a more controlled study in which they could randomly assign children to receive music lessons or not, and then measure the effects.

They decided to perform the study at a school in Beijing, along with researchers from the IDG/McGovern Institute at Beijing Normal University, in part because education officials there were interested in studying the value of music education versus additional reading instruction.

The 74 children participating in the study were divided into three groups: one that received 45-minute piano lessons three times a week; one that received extra reading instruction for the same period of time; and one that received neither intervention. All children were 4 or 5 years old and spoke Mandarin as their native language.

After six months, the researchers tested the children on their ability to discriminate words based on differences in vowels, consonants, or tone (many Mandarin words differ only in tone). Better word discrimination usually corresponds with better phonological awareness — the awareness of the sound structure of words, which is a key component of learning to read.

Children who had piano lessons showed a significant advantage over children in the extra reading group in discriminating between words that differ by one consonant. Children in both the piano group and extra reading group performed better than children who received neither intervention when it came to discriminating words based on vowel differences.

The researchers also used electroencephalography (EEG) to measure brain activity and found that children in the piano group had stronger responses than the other children when they listened to a series of tones of different pitch. This suggest that a greater sensitivity to pitch differences is what helped the children who took piano lessons to better distinguish different words, Desimone says.

“That’s a big thing for kids in learning language: being able to hear the differences between words,” he says. “They really did benefit from that.”

In tests of IQ, attention, and working memory, the researchers did not find any significant differences among the three groups of children, suggesting that the piano lessons did not confer any improvement on overall cognitive function.

“The work specifically relates behavioral improvements in speech perception to the neural impact of musical training, which has both theoretical and real-world significance.”

“This study answers the question in the affirmative, with an elegant design that directly compares the effect of music and language instruction on young children. The work specifically relates behavioral improvements in speech perception to the neural impact of musical training, which has both theoretical and real-world significance,” says Patel, who was not involved in the research.

Desimone says he hopes the findings will help to convince education officials who are considering abandoning music classes in schools not to do so.

“There are positive benefits to piano education in young kids, and it looks like for recognizing differences between sounds including speech sounds, it’s better than extra reading. That means schools could invest in music and there will be generalization to speech sounds,” Desimone says. “It’s not worse than giving extra reading to the kids, which is probably what many schools are tempted to do — get rid of the arts education and just have more reading.”

Desimone now hopes to delve further into the neurological changes caused by music training. One way to do that is to perform EEG tests before and after a single intense music lesson to see how the brain’s activity has been altered.