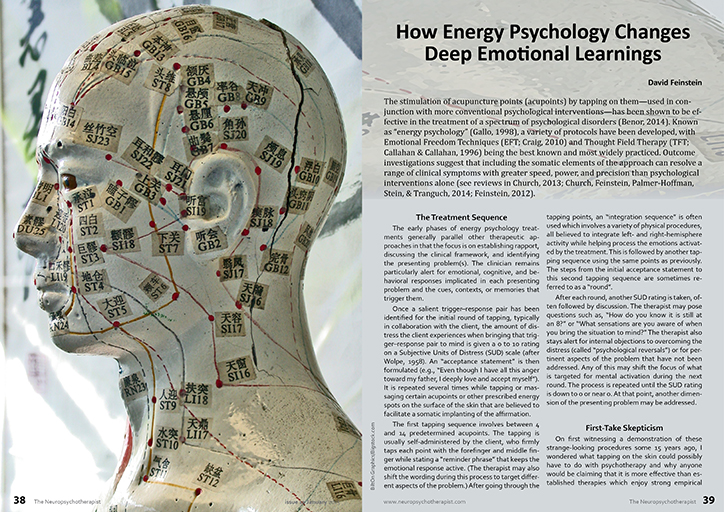 Download this issue at our Academy site: [wlm_private “NPT Basic|3 Year Subscription|Standard Membership|Staff|NPT Premium|Standard Monthly”] Members CLICK HERE to get the download for free from our Academy. [/wlm_private]

The stimulation of acupuncture points (acupoints) by tapping on them—used in conjunction with more conventional psychological interventions—has been shown to be effective in the treatment of a spectrum of psychological disorders (Benor, 2014). Known as “energy psychology” (Gallo, 1998), a variety of protocols have been developed, with Emotional Freedom Techniques (EFT; Craig, 2010) and Thought Field Therapy (TFT; Callahan & Callahan, 1996) being the best known and most widely practiced. Outcome investigations suggest that including the somatic elements of the approach can resolve a range of clinical symptoms with greater speed, power, and precision than psychological interventions alone (see reviews in Church, 2013; Church, Feinstein, Palmer-Hoffman, Stein, & Tranguch, 2014; Feinstein, 2012).

DAVID FEINSTEIN, PhD, a clinical psychologist, has been a pioneer in developing innovative therapeutic approaches, leading to nine national awards for his books on consciousness and healing.

He was recipient of the U.S. Book News Best Psychology/Mental Health Book Award of 2007. He has served on the faculties of The Johns Hopkins University School of Medicine and Antioch College. 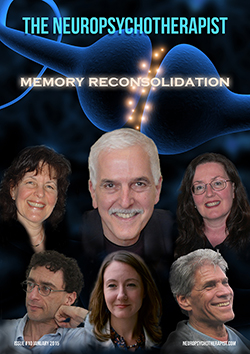 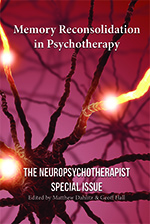 Hi David I just watched your ACEP lecture on how Energy Psychology creates deep emotional changes. Great to see all the research done in the area. I have to say however as a clin psych with 22 years experience in treating trauma I disagreed somewhat with your explanation. I use EMDR and exposure and EFT in my practice. You appear to imply Energy Psych creates a new association to the trauma response and this is what creates change. My learning and observation is that EMDR, exposure (not in vivo) simply allows the disjointed unprocessed memories and emotions to be properly processed and it is this proper full processing of the trauma that creates the change. In fact the only block I have observed to these therapies working is when the client is dissociative or numb or unable to access feeling perhaps due to inattention. But when they can access feeling and process fully the change naturally occurs and only when this happens does their negative belief change. You also speak of exposure being only 50 % effective – this may be the case for in vivo but the gold standard for PTSD is not in vivo but imaginal exposure though this is also a misleading term as it can mean something different. But basically asking the client to describe in detail the traumatic event and rate the emotion over and over is what exposure for PTSD involves with much higher success rates then you suggest – at least 80%. EMDR results are comparable and appear to be working at least in a similiar way i.e. allowing the client to process and feel fully the event in a more relaxed state so it can resolve naturally. Anyway I felt I had to share my thoughts as treatment for PTSD I find is so misguided in my experience. You have motivated me to explore EFT s use in PTSD so thankyou for your interesting lecture and work! Sonia