How Couples Change: A psychobiological approach to couples therapy 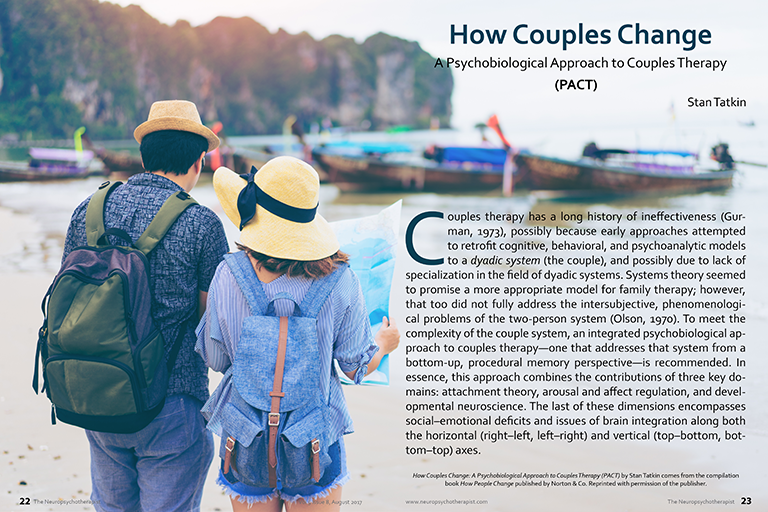 Couples therapy has a long history of ineffectiveness (Gurman, 1973), possibly because early approaches attempted to retrofit cognitive, behavioral, and psychoanalytic models to a dyadic system (the couple), and possibly due to lack of specialization in the field of dyadic systems. Systems theory seemed to promise a more appropriate model for family therapy; however, that too did not fully address the intersubjective, phenomenological problems of the two-person system (Olson, 1970). To meet the complexity of the couple system, an integrated psychobiological approach to couples therapy—one that addresses that system from a bottom-up, procedural memory perspective—is recommended. In essence, this approach combines the contributions of three key domains: attachment theory, arousal and affect regulation, and developmental neuroscience. The last of these dimensions encompasses social–emotional deficits and issues of brain integration along both the horizontal (right–left, left–right) and vertical (top–bottom, bottom–top) axes.

A psychobiological approach to couples therapy (PACT) is a capacity model. Instead of looking at conflict or at the content of conflict, we look at the psychobiological capacities of partners to remain self-regulated and to maintain safety and security through effective mutual regulation. I have proposed that partners in a primary dyadic system are only as successful as their ability to interactively regulate each other’s autonomic nervous systems (Tatkin, 2003). One aspect of successful coupling is the combined ability of both partners to mutually generate positive high states of arousal (e.g., exciting love) and positive low states of arousal (e.g., quiet love), and to foreshorten and attenuate negative low and high states of arousal (e.g., threat, distress).

For instance, Sam and Max reveal during our initial therapy sessions that they are able to create high sympathetic states of exciting love (dopaminergic) through the use of direct eye gaze, joint attention (mutual joy from a third object), and conversion of self-excitement (e.g., exciting news for one partner) into something useable for mutually amplified exciting love (e.g., “I’m so lucky to be here with you”). These are all social–emotional skills in the co-generation of high positive states. However, both Max and Sam have great difficulty creating or managing quiet love (serotonergic) because the quiet but alert state makes Sam deeply anxious. More troubling, they have difficulty, as a regulatory team, foreshortening and attenuating distress. This functional deficit can easily create a pattern of mutual dysregulation, leading to increased threat and spiraling into avoidance or aggression that cascades toward dissolution of the relationship.
PACT takes into account each partner’s psychobiological capacities in areas of interoception and somatic awareness (e.g., anterior insula); theory of mind (e.g., orbitofrontal cortex, anterior cingulate, and temporal–parietal junction); recognition of facial expression (right-hemisphere limbic structures); use of prosody (right-hemisphere speech structures); inhibitory systems (e.g., ventromedial bundle and ventral vagal system); and other mediators that allow individuals to remain friendly and deal quickly and effectively with distress. PACT views threat as one of the most troublesome and predictable factors influencing relationship dissatisfaction. Thus, the PACT process of change focuses on how partners deal with threat and the brain’s tendency toward automation, and ultimately guides them toward the stance of secure functioning.

Threat in the Dyadic System

Arguably, the human brain is built more for war than it is for love (Solomon & Tatkin, 2010). This bias serves the human need for survival. We must remain alert to danger and threat in order to survive. However, this threat system, which is intended to keep the species alive, can work against safety and security in relationships because the brain is constantly ticking up threat cues in the form of visual, auditory, kinesthetic, and even olfactory cues. Thus, in attempting to move couples from war toward love—in short, toward desirable change—the PACT therapist is concerned not so much with threat in the large sense, but in the microscopic sense. PACT focuses on threat that is built into all transactions and interactions; in other words, the misattuned moments between individuals.

Threat and the Brain

Threat detection is fundamentally a subcortical operation and may be understood as noncognitive because it is informed by implicit memory systems (Joseph, 1996) and because its actions are deployed by the autonomic nervous system (Schore, 1994). Various subcortical structures and networks have been implicated in threat detection and management. For instance, activating hypothalamic centered systems, such as those driven by the amygdala, employ the motor thalamus, stratum, and periaqueductal grey, as well as neuroendocrine processes involving both the adrenal and pituitary glands (i.e., the limbic–hypothalamic–pituitary–adrenal [LHPA]). All these subcortical structures regulate the fight–flight–freeze response. Even the anterior insula, which is a primary center of the disgust response, is intimately involved in threat reaction (Herz, 2012; Rozin, Lowery, & Ebert, 1994; Wicker et al., 2003).

Also hooked into this system is the right hemisphere’s predilection for recognizing threatening facial expressions, vocal intonations, gestures, movements, and postures. The left hemisphere’s ability to recognize dangerous words and phrases leads back to the amygdala, subthalamic, and stratum axis via Wernicke’s and the inferior parietal area (Ekman, 1993; Joseph, 1996; Schore, 1994). Deeply inhibitory reactions to life threat, wherein one cannot fight or flee, involve the reptilian branch of the 10th cranial nerve, often referred to as the dorsal–motor–vagal complex. An extreme reaction to internal and external threat cues leads to energy conservation withdrawal, stilling, and collapse (Porges, 2001). Somatic responses to internal and external threat stimuli have been elaborated on by somatically oriented trauma specialists (Levine, 1997; Ogden, Minton, & Pain, 2006; van der Kolk, 1984).

Moreover, the brain has a negativity bias toward picking up internal cues as well as cues from the environment that it considers dangerous. Assuming this bias, there is a strong tendency to recall negative experiences over positive ones (Vaish, Grossmann, & Woodward, 2008). The unattended mind is negatively valenced, leaning toward aversive emotions, such as fear (Rozin & Royzman, 2001). This negative bias means that relationship security is easily threatened by often minuscule errors in the intersubjective back and forth between individuals.

Sam and Max are what PACT therapists term a high-arousal couple. Besides having frequent conflicts, their biological set points are biased toward the high-sympathetic end of the arousal spectrum; hence their ability to generate high positive states. They are able to create high negative states, as well. For example, Max finds Sam’s eye rolling threatening enough that he launches a spate of threatening words and phrases. The amygdala seizes on these words, leading Sam to jut out her chin, bare her teeth, and strike back sparingly with a barely controlled, “I can’t stand you!” These are just the macroscopic threat cues. During our sessions, I use video frame-by-frame analysis of their fights to reveal the micromovements, microexpressions, and microshifts in prosody that appear prior to obvious signs of heightened arousal. PACT therapists are particularly interested in the rapid microevents that take place in the couple’s intersubjective field, and in sharing these observations with the partners as a means of training them to regulate their arousal states.

This has been an excerpt from How Couples Change: A psychobiological approach to couples therapy (PACT) by Stan Tatkin. To download the full article, and more excellent material for the psychotherapist, please subscribe to our monthly magazine.