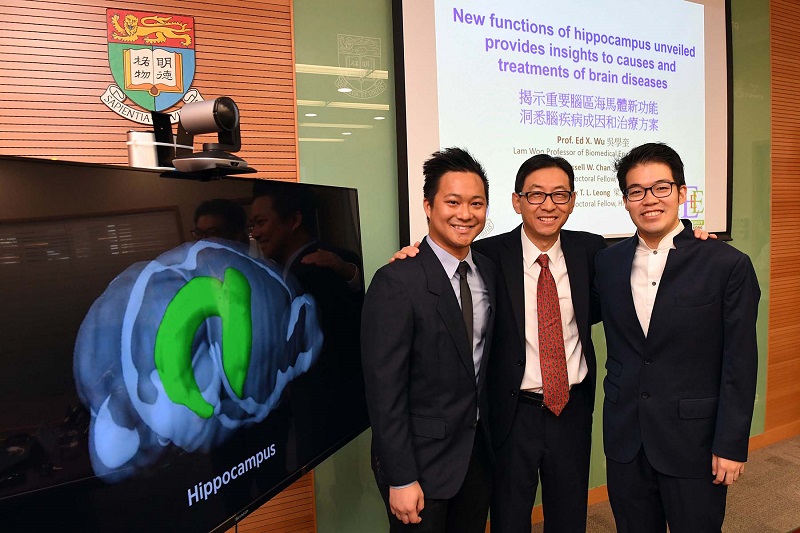 A research team led by Lam Woo Professor of Biomedical Engineering Ed X. Wu of the Department of Electrical and Electronic Engineering at the University of Hong Kong has made major breakthrough in unveiling the mysteries of the brain to reveal functions of an important region, hippocampus, not known to scientists before.

The findings have recently been published in the prestigious international academic journal Proceedings of the National Academy of Sciences of the United States of America (PNAS) in August 2017.

The hippocampus, located underneath the cortex, plays important roles in memory and navigation. Alzheimer’s disease and other forms of dementia have been proven to have affected and damaged this area of the brain, resulting in early symptoms including short-term memory loss and disorientation. People with hippocampal damage may lose the ability to form and retain new memories. It is also closely related to other diseases such as epilepsy, schizophrenia, transient global amnesia and posttraumatic stress disorder.

Rodent experiments conducted by Dr Russell W. Chan, Dr Alex T. L. Leong and others, led by Professor Wu, revealed that low-frequency activities in the hippocampus can drive brain-wide functional connectivity in the cerebral cortex and enhance sensory responses. The cerebral cortex is the largest region of the mammalian brain and plays a key role in memory, attention, perception, cognition, awareness, thought, language, and consciousness. In other words, low-frequency activities of the hippocampus can drive the functional integration between different regions of the cerebral cortex and enhance the responsiveness of vision, hearing and touch. These results indicated that hippocampus can be considered as the heart of the brain, a breakthrough in our knowledge of how the brain works.

Furthermore, these results also suggest that low-frequency activities in the hippocampus can enhance learning and memory since low-frequency activities usually occur during slow-wave sleep which has been associated with learning and memory. Slow-wave sleep, often referred as deep sleep, is a state that we usually enter several times each night and is necessary for survival. Alzheimer’s disease is a chronic neurodegenerative disease that usually starts slowly and worsens over time, and the most common early symptom is memory loss. These results may also have potential therapeutic implications of hippocampal neuromodulation in Alzheimer’s disease.

These current findings are a major step in furthering our fundamental understanding of the origins and roles of brain-wide functional connectivity. These findings also signify the potentials of rsfMRI and neuromodulation for early diagnosis and enhanced treatment of brain diseases including Alzheimer’s disease, dementia, epilepsy, schizophrenia, transient global amnesia, and posttraumatic stress disorder.

Professor Wu’s team is one of the world’s leading teams in functional magnetic resonance imaging (fMRI) research, particularly in the investigation of auditory and visual functions, and brain structural and functional connectivity. The pioneering technologies they employ include the use of optogenetics activation, pharmacological inactivation and fMRI to serve as an important tool for investigating the dynamics underlying brain activity propagation as well as the origins and roles of brain functional connectivity.

Their earlier revelation that the thalamus, another region connecting to the cortex, is not just a relay or passive brain region as initially thought, but can initiate brain-wide neural interactions at different frequencies, had been published in the December 2016 edition of PNAS.

The human brain is the source of our thoughts, emotions, perceptions, actions, and memories. How the brain actually works, however, remains largely unknown. One grand challenge for neuroscience in the 21st century is to achieve an integrated understanding of the large-scale brain-wide interactions, particularly the patterns of neural activities that give rise to functions and behaviour. In 2010, the National Institute of Health (NIH) in the US launched the Human Connectome Project which aims to “provide an unparalleled compilation of neural data, an interface to graphically navigate this data and the opportunity to achieve never before realised conclusions about the living human brain”. In 2013, the Obama administration in the US launched the BRAIN Initiative to “accelerate the development and application of new technologies that will enable researchers to produce dynamic pictures of the brain that show how individual brain cells and complex neural circuits interact at the speed of thought.” In November 2016, China launched its own initiative “China Brain Project”, which aims to advance basic research on the neural circuit mechanisms underlying cognition in hopes to improve brain disease diagnosis/intervention and inspire development of brain-machine intelligence technology.

The human brain only accounts for 2% of the total body weight, yet it consumes about 20% of the total body’s energy demand. Despite its importance, it is one of the least understood organs of the body. The research team’s findings have advanced our fundamental understanding of the origins and roles of brain-wide functional connectivity.

Optogenetic and pharmacological functional magnetic resonance imaging
The emerging integrated technique adopted by Professor Wu’s team consists of optogenetics, pharmacological neuromodulation and functional magnetic resonance imaging (fMRI). Optogenetics is a neuromodulation method that uses a combination of techniques from optics and genetics to control the activities of individual neurons in living tissues. Pharmacological neuromodulation uses drugs to manipulate the activities of neurons. fMRI is a large-view non-invasive imaging technique for detecting brain-wide activations. Researchers can make use of fMRI to visualize whole brain activity in response to different optogenetic stimulation and pharmacological manipulations. The synergistic combination of the three technologies has enormous potential to spark a new age of interdisciplinary research to advance our understanding of the brain.