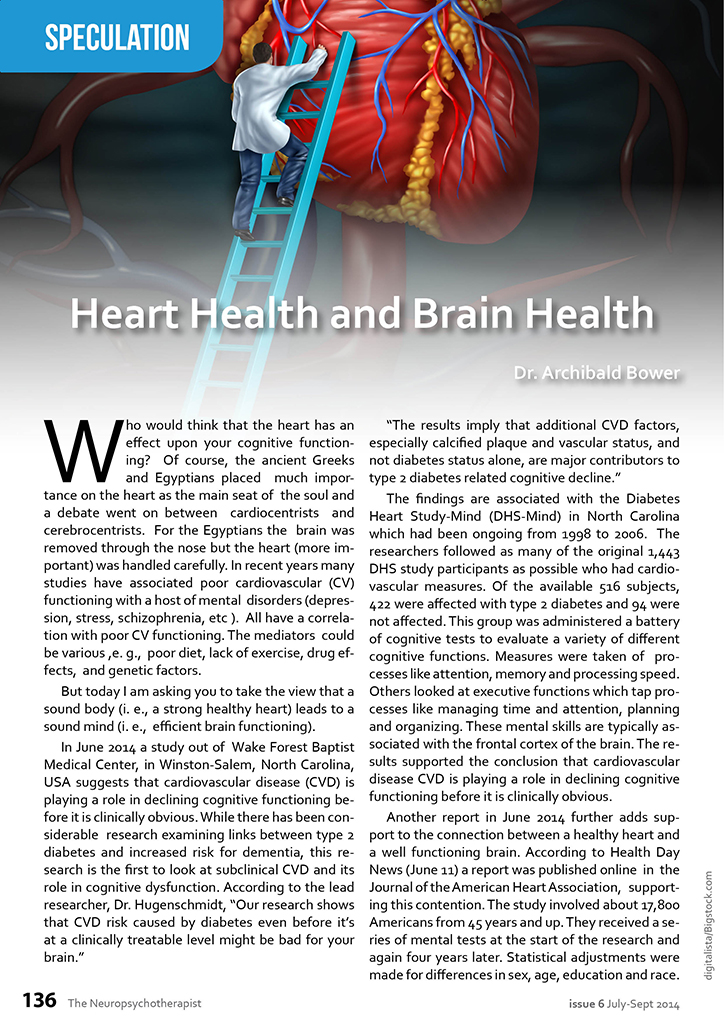 Who would think that the heart has an effect upon your cognitive functioning?  Of course, the ancient Greeks and Egyptians placed  much importance on the heart as the main seat of  the soul and a debate went on between  cardiocentrists  and cerebrocentrists.  For the Egyptians the  brain was removed through the nose but the heart (more important) was handled carefully. In recent years many studies have associated poor cardiovascular (CV) functioning with a host of mental  disorders (depression, stress, schizophrenia, etc ).  All have a correlation with poor CV functioning. The mediators  could be various ,e. g.,  poor diet, lack of exercise, drug effects,  and genetic factors.

But today I am asking you to take the view that a sound body (i. e., a strong healthy heart) leads to a sound mind (i. e.,  efficient brain functioning).

In June 2014 a study out of  Wake Forest Baptist Medical Center, in Winston-Salem, North Carolina, USA suggests that cardiovascular disease (CVD) is playing a role in declining cognitive functioning before it is clinically obvious. While there has been considerable  research examining links between type 2 diabetes and increased risk for dementia, this research is the first to look at subclinical CVD and its role in cognitive dysfunction. According to the lead researcher, Dr. Hugenschmidt, “Our research shows that CVD risk caused by diabetes even before it’s at a clinically treatable level might be bad for your brain.”

The findings are associated with the Diabetes Heart Study-Mind (DHS-Mind) in North Carolina which had been ongoing from 1998 to 2006.  The researchers followed as many of the original 1,443 DHS study participants as possible who had cardiovascular measures. Of the available 516 subjects,  422 were affected with type 2 diabetes and 94 were not affected. This group was administered a battery of cognitive tests to evaluate a variety of different cognitive functions. Measures were taken of  processes like attention, memory and processing speed. Others looked at executive functions which tap processes like managing time and attention, planning and organizing. These mental skills are typically associated with the frontal cortex of the brain. The results supported the conclusion that cardiovascular disease CVD is playing a role in declining cognitive functioning before it is clinically obvious.

Another report in June 2014 further adds support to the connection between a healthy heart and a well functioning brain. According to Health Day News (June 11) a report was published online  in  the Journal of the American Heart Association,   supporting this contention. The study involved about 17,800 Americans from 45 years and up. They received a series of mental tests at the start of the research and again four years later. Statistical adjustments were made for differences in sex, age, education and race.  The researchers found increasing deficits in learning, memory and verbal skills for nearly 10% of the participants. Severity of the deficits was related with heart functioning. Deficits in memory and learning were observed  in 4.6 % of participants  with the poorest heart health, 2.7 % of those with intermediate heart health and 2.6 %  of the participants with the most healthy hearts.

You may wonder what groups  fared best? The researchers reported that better heart health and cardiovascular health was more frequent among men, people with higher education and higher  incomes.

Conversely, the researchers found that  mental impairments occurred more frequently among participants with lower incomes, those who already had a history of  heart disease, and participants from  the “stroke belt” states (mainly in southeastern USA).

However, just because there is a positive association between good heart health and good brain function does not mean that a healthy heart directly causes good brain function.  One possibility according the Dr Thacker is that small strokes that did not result in observable symptoms played a role.

Next  let us hear a few words from  Ralph Sacco, M.D., chief of neurology at the Miller School of Medicine at the University of Miami and past president of the American Heart Association on the connection between heart health and brain health. He says, “New studies have shown that the risk factors for heart disease and stroke, such as physical inactivity and obesity, also contribute to dementia, Alzheimer’s disease, memory loss and cognitive dysfunction.”

Most of the public do not understand the connection between the two. However, over time unhealthy behaviours (poor diet, alcohol, and inactivity) take their toll on the cardiovascular system. They can result in the narrowing of blood vessels due to the accumulation of plaque and debris in the blood system.   This reduces the blood flowing to the brain and is associated with hardening of the arteries in the heart and brain. Because the brain does not get the blood and oxygen it needs dysfunctions will occur in your cognitive abilities. As Dr Sacco says , “ You could experience problems thinking, trouble with memory, difficulty finding your way from place to place…” And of course there is an increase in the danger of a stroke should the blood flow to the brain be abruptly blocked.

Many people associate memory loss with Alzheimer’s disease and believe that it can not be treated or prevented. However, Dr Sacco, as president of the American Heart Association , observes that by caring for your heart by controlling the well known risk factors you can also have a profound effect upon the health of your brain.

The research leader Professor Simon Stewart of the Baker IDI Heart & Diabetes Institute says that heart failure is not the same as a heart attack. Rather it is a chronic event stretching over time during which the heart struggles to pump enough blood through the body. Symptoms are shortness of breath, fatigue and sleeping difficulties. While heart failure can be treated there is permanent damage to the heart and likely damage to the kidneys and brain.

As heart failure progresses the person will be hospitalized. At this point their general health often deteriorates rapidly.  They have less chance of living five more years than a woman with breast cancer.

In conclusion, it appears clear that a healthy CV system is important for  healthy brain functioning. Keeping the body healthy through life long habits of  exercise and diet will have benefits for the majority of people as they pass into older age.