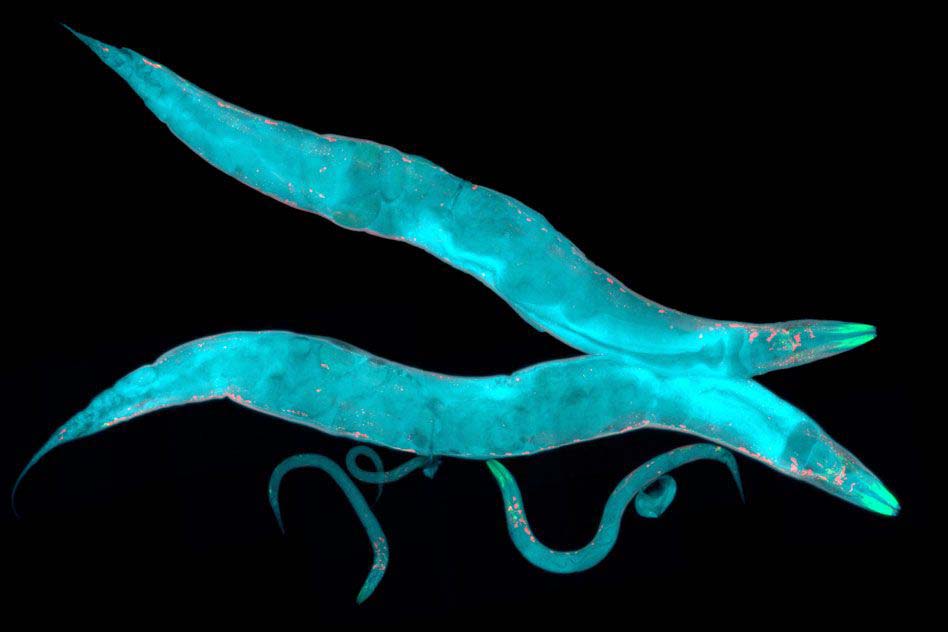 Researchers found that a type of nerve cell found in the gut of the worm Caenorhabditis elegans is specialized to detect when bacteria are ingested. © MIT

Study may lead to a better understanding of the digestive tract’s nervous system.

-AMAZONPOLLY-ONLYWORDS-END-
When a hungry worm encounters a rich food source, it immediately slows down so it can devour the feast. Once the worm is full, or the food runs out, it will begin roaming again.

A new study from MIT now reveals more detail about how the worm’s digestive tract signals the brain when to linger in a plentiful spot. The researchers found that a type of nerve cell found in the gut of the worm Caenorhabditis elegans is specialized to detect when bacteria are ingested; once that occurs, the neurons release a neurotransmitter that signals the brain to halt locomotion. The researchers also identified new ion channels that operate in this specialized nerve cell to detect bacteria.

“In terms of a precise mechanism of how the gut signals back up to the brain, it was unclear what was going on,” says Steven Flavell, an assistant professor of brain and cognitive sciences and a member of MIT’s Picower Institute for Learning and Memory. “Food is something that really motivates this animal, so people have studied this for a long time, but the mechanism of how food ingestion is detected by the nervous system to drive a behavioral change, that had really been missing.”

Flavell is the senior author of the study, which appears in an issue of Cell. Jeffrey Rhoades, a former technical assistant in the Picower Institute, is the paper’s first author. 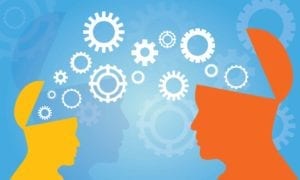 Applying the Polyvagal Theory to Improve Client Outcomes
Valued at $559.95
Today Only $199.99 — An Unbelievable Value!

In all animals, the gut and the brain have a strong connection. Signals from our gastrointestinal tract let us know when we’re full and help to control our appetite, via hormones such as leptin and ghrelin. The GI tract is also the source of most of the body’s serotonin, which also play a role in appetite.

While the full complexities of the human enteric nervous system have yet to be fully understood, many researchers use C. elegans, which has a much simpler nervous system, as a model to study feeding behavior. Researchers have previously shown that food greatly influences the locomotion of C. elegans. The worm’s diet consists mainly of bacteria, and scientists found that whenever the worms encounter a large patch of food, they slow down to consume it. When they are satiated, Flavell and his colleagues found that the animals begin wandering around their environment again. Thanks to their recent study, we are beginning to understand why.

“There was behavioral evidence that C. elegans’ nervous system is receiving information about the food in the environment, but we didn’t know how that worked,” Flavell says.

The researchers knew that serotonin release was driving the slowdown, but they didn’t know what was triggering that release. To try to figure that out, they decided to study a type of serotonin-producing enteric neurons called neurosecretory-motor (NSM) neurons, which are located in the lining of the C. elegans digestive organ, known as the pharynx.

Through a series of experiments, the researchers found that NSM neurons become active immediately when worms eat bacterial food. NSM neurons have a single long extension, or neurite, that projects into the worms’ gut. The researchers also discovered that this neurite acts as a sensory ending for NSM neurons, playing a key role in activating the neurons when the animal eats bacterial food.

Further studies revealed two new ion channels, called DEL-3 and DEL-7, that are located at the very tip of this neurite and are required for NSM neurons to be activated by bacterial food. These channels are part of a family of proteins called acid-sensing ion channels (ASICs), which are found in all animals including humans. Some of these channels have roles in taste and in pain detection, while others’ functions are still unknown. Intriguingly, these channels are also expressed in enteric neurons in the mammalian gut. Flavell speculates that ASICs may play a general role in sensing bacterial populations present along the digestive tract and potentially elsewhere.

“A particularly intriguing aspect of this work is the identification of the putative food sensors in NSM,” says Piali Sengupta, a professor of biology at Brandeis University who was not involved in the study. “These turn out to be members of the ASIC ion channel family, which are activated by multiple stimuli in other systems, including mechanical stimuli and pH. In C. elegans, these channels appear to be activated by an as yet unidentified component of bacteria, the food source of C. elegans.” 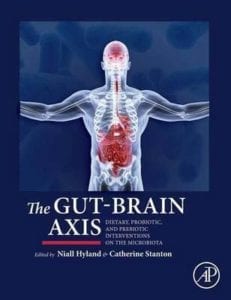 The Gut-Brain Axis : Dietary, Probiotic, and Prebiotic Interventions on the Microbiota

The researchers are now trying to figure out how DEL-3 and DEL-7 detect bacteria. One possibility is that the channels directly detect a compound secreted by bacteria. Alternatively, a bacterial compound may interact with a nearby receptor that then activates the ion channels, Flavell says.

Flavell’s lab is also planning to study other C. elegans neurons that also have extensions into the gut, to see if they play a similar role to the NSM neurons, possibly detecting other components of bacteria or other food cues.

“With the tools that we now have in place, it should be straightforward for us to go into these other cell types and ask if they are activated by food ingestion, and if so, what kinds of channels do they express,” Flavell says. “There are about 30 other ion channels that are closely related to DEL-3 and DEL-7 in the worm, and they might be detecting other bacterial signals.”

The researchers are also exploring in more detail the effects of serotonin on the rest of the animals’ brain. Once the ion channels in the NSM cells are activated, the cells begin releasing serotonin, which can then be detected by nearby neurons that express serotonin receptors.

“We’re trying to really look at the whole rest of the nervous system to see how serotonin changes the activity of many downstream cells to ultimately lead to this behavioral change,” Flavell says.

Another unanswered question is whether this basic mechanism for bacterial sensing that the Flavell lab has discovered also operates in humans. The human gut contains a diverse array of bacteria, referred to as the microbiome. In addition, the gut is lined with neuron-like cells called enterochromaffin cells that make serotonin and release it to sensory neurons that carry information to the brain. Researchers are only just beginning to understand the channels and receptors that might allow these cells to detect the contents of the gut, and how serotonergic gut-to-brain signaling might alter behavior in mammals. These new mechanisms worked out in the worm may guide future studies in this area.