Guide to the Brain Part 8

The Psychotherapist’s Essential Guide to the Brain (Part 8): Physical and Social Pain 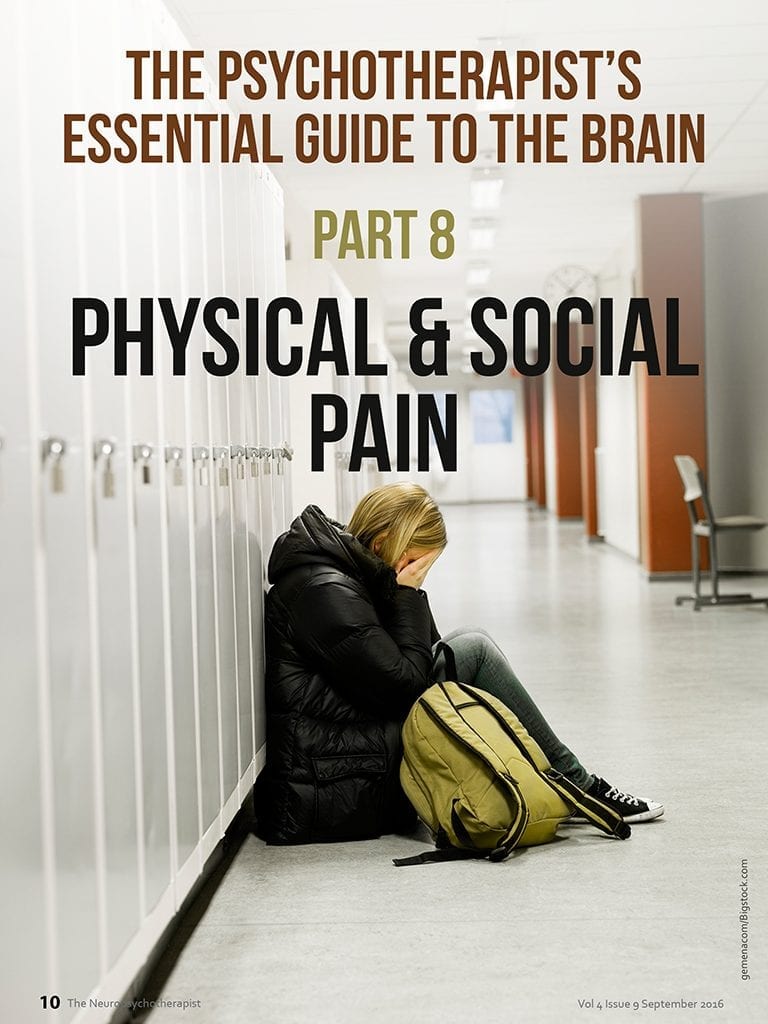 Professor Matthew Lieberman heads the social cognitive neuroscience laboratory at UCLA and is the author of Social: Why Our Brains Are Wired to Connect (Lieberman, 2013). He and his colleagues have done some important work in discovering the neural underpinnings of social pain and how it correlates with physical pain. As we all know, the language we use to describe social pain employs the same words and phrases commonly used to describe physical pain: “She broke my heart,” “I’m so cut up about it,” “He really hurt me,” “They stabbed me in the back!” and so on. It appears this is not merely a Western cultural phenomenon: it seems to occur across cultures and languages. There is a strong linguistic overlap between physical and social–emotional pain. But is there an actual neural overlap? This is the question that neuroscientists like Professor Lieberman have been investigating: Can the social pain of rejection, exclusion or ostracism share the same or similar neural mechanisms as physical pain?

One of the regions of the brain under investigation is the dorsal anterior cingulate cortex (dACC). Readers may remember that the anterior cingulate cortex (ACC) is the front part of the cingulate cortex, commonly understood to be employed in error detection, with the dorsal (top) part associated with cognitive processing and the ventral (bottom) part with emotional processing. Studies have suggested that the dACC is involved in processing the distress of both physical and social pain—rather like an alarm system that both detects a problem and elicits a response. The dACC seems to monitor for discrepancies between one’s goals and one’s most habitual or predominant responses. When there is an inconsistency, the dACC lets the lateral prefrontal cortex know that it needs to intervene with a contextually appropriate response. The Stroop test is a good illustration, in that when subjects are shown colour words in odd colours (e.g., the word “red” written in blue) and asked to state the colour rather than the word, the dACC detects an inconsistency with the prepotent response to pronounce the word rather than identify its colour (i.e., the correct answer for the word “red” written in blue is blue, but the tendency is to answer red). The dACC also functions to create attention-getting affective states such as pain, anxiety and distress. Lieberman (2013) likens the ACC to an alarm system, in that it can detect certain conditions (such as goal conflicts) and sound the alarm...

This has been an excerpt from The Psychotherapist's Essential Guide to the Brain Part 8. To read the full article, and more excellent material for the psychotherapist, please subscribe to our monthly magazine.