Guide To The Brain Part 6

The Psychotherapist’s Essential Guide To The Brain 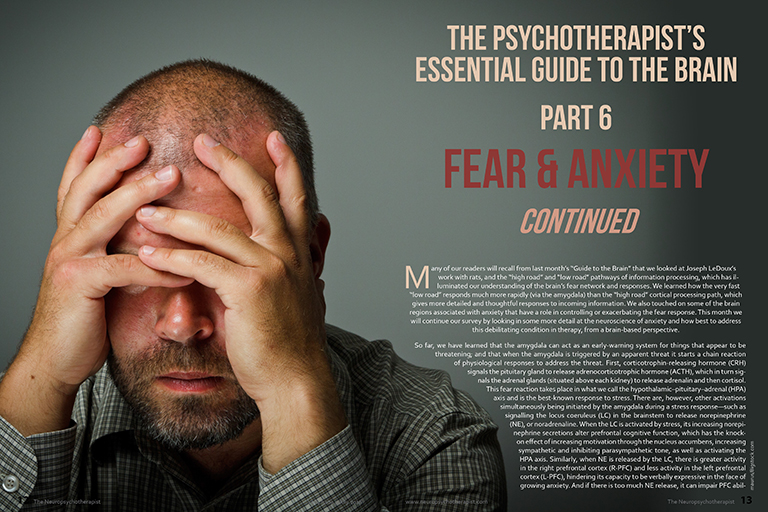 Many of our readers will recall from last month’s “Guide to the Brain” that we looked at Joseph LeDoux’s work with rats, and the “high road” and “low road” pathways of information processing, which has illuminated our understanding of the brain’s fear network and responses. We learned how the very fast “low road” responds much more rapidly (via the amygdala) than the “high road” cortical processing path, which gives more detailed and thoughtful responses to incoming information. We also touched on some of the brain regions associated with anxiety that have a role in controlling or exacerbating the fear response. This month we will continue our survey by looking in some more detail at the neuroscience of anxiety and how best to address this debilitating condition in therapy, from a brain-based perspective.

So far, we have learned that the amygdala can act as an early-warning system for things that appear to be threatening; and that when the amygdala is triggered by an apparent threat it starts a chain reaction of physiological responses to address the threat. First, corticotrophin-releasing hormone (CRH) signals the pituitary gland to release adrenocorticotrophic hormone (ACTH), which in turn signals the adrenal glands (situated above each kidney) to release adrenalin and then cortisol. This fear reaction takes place in what we call the hypothalamic–pituitary–adrenal (HPA) axis and is the best-known response to stress. There are, however, other activations simultaneously being initiated by the amygdala during a stress response—such as signalling the locus coeruleus (LC) in the brainstem to release norepinephrine (NE), or noradrenaline. When the LC is activated by stress, its increasing norepinephrine secretions alter prefrontal cognitive function, which has the knock-on effect of increasing motivation through the nucleus accumbens, increasing sympathetic and inhibiting parasympathetic tone, as well as activating the HPA axis. Similarly, when NE is released by the LC, there is greater activity in the right prefrontal cortex (R-PFC) and less activity in the left prefrontal cortex (L-PFC), hindering its capacity to be verbally expressive in the face of growing anxiety. And if there is too much NE release, it can impair PFC ability and disinhibit the amygdala, leading to a state where the amygdala effectively “hijacks” the PFC. As a result, we are unable to rationalise the fear and anxiety we are feeling.

Promoting approach behaviours is critical to activating the L-PFC. This area of the brain is much better at processing details, maintaining positivity and problem-solving than the R-PFC, which can get lost in the negative global overwhelm of irrational anxiety. In generalised anxiety disorder, for example, there can be a gloomy, anxiety-provoking gestalt, when you can’t quite put your finger on the exact problem, and it is at this moment that projections from the L-PFC, particularly the left medial PFC (lmPFC), can inhibit the activity of the amygdala—putting on the breaks, so to speak, of the habitual anxiety loop. By focusing on discrete details of specific behaviours, in incremental steps, we can walk clients through what is called a “controllable incongruence” toward greater L-PFC control. Controllable incongruence is a process of neural change where we maximise the learning capacity of the brain by challenging what is habitual (R-PFC-mediated avoidant behaviour, for example), in a way that feels “controllable”, albeit uncomfortable, and not overwhelming. It is important to regulate the process and get it “just right”: not enough challenge to the status quo will fail to stimulate new learning, too much will inhibit any new learning. Between these extremes lies the Goldilocks “just right” solution: a moderate increase in NE (challenge) and sustained beta endorphin activation to facilitate positive neural changes. In this way, graded exposure can rewire the brain...