Guide to the Brain Part 14 – Depression 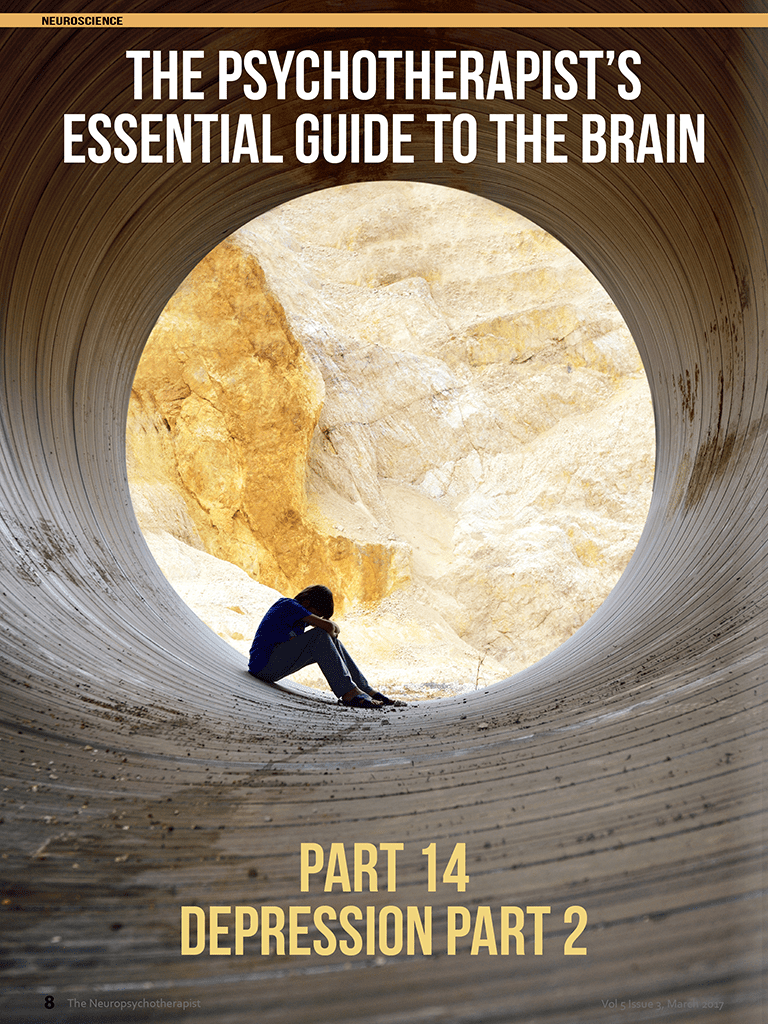 The Psychotherapist’s Essential Guide To The Brain

Last month we covered multiple brain areas implicated in depression. Readers will have appreciated the complexity of the changes depression can entail in the neural network. This month we endeavor to throw light on the role of neurochemicals, genetics, and neuroplasticity, in order to arrive at a more accurate and holistic understanding of how depression affects the individual.

Early experimental evidence supported the serotonin depletion hypothesis. For example, there were found to be fewer serotonin transporter sites on platelets in depressed patients (Healy & Leonard, 1987), and less metabolic product (5-HTAA, from the breakdown of serotonin) was observed in cerebrospinal fluid (Cheetham, Katona, & Horton, 1991). But just to complicate matters, other studies have found no evidence of reduced serotonergic function in depressed patients (Gjerris, 1988). However, the monoamine hypothesis received support in the form of observations that the drug reserpine, which depletes monoamines, seemed to increase depressive symptoms. Armed with this knowledge, researchers looked at how to selectively increase synaptic serotonin levels, which led to the creation of selective serotonin reuptake inhibitors (SSRIs).

During the 1970s and 1980s there was also a focus on monoamine receptors, and how receptor density and sensitivity changed in response to different therapies, especially antidepressants. Generally the body of research supported the hypothesis that depression is marked by impaired serotonergic and adrenergic activity, with effective drug therapy increasing one or both of these systems (Palazidou, 2012). We know that presynaptic serotonergic cells have autoreceptors that monitor the amount of serotonin released by the cell. These receptors regulate the amount of serotonin release in tandem with the reuptake transporters that take serotonin from the synaptic cleft and back into the presynaptic cell. Antidepressants, by blocking reuptake mechanisms and forcing more monoamines to stay in the synaptic cleft, increase the serotonergic activity of cells in a matter of days, and autoreceptors quickly adapt to the increase in serotonin. The firing rate of the monoaminergic neurons is initially decreased to compensate for the increase in circulating monoamines, but the inhibition diminishes over time, and a therapeutic effect is felt by the patient (Lambert & Kinsley, 2005).

Another theory linking neurochemicals and depression rests on the catecholamine hypothesis introduced by Joseph Schildkraut in 1965. This theory postulates that depression is a result of norepinephrine (NE) deficiency, and that an overabundance of NE leads to manic states. Although SSRIs had already produced clinically significant results in dealing with depression, the notion of a relationship between depleted NE and depression was supported by research (Delgado & Moreno, 2000; Nemeroff, 1998). It is noteworthy that, as in the case of serotonin, NE depletion does not induce clinical depression in healthy people—the cause of depression appears to be more complex than simple imbalances in these levels. It is likely that depression may be a result of dysfunction in brain areas modulated by monoamine systems. The same probably holds for the involvement of another monoamine, dopamine, which has also been implicated in depression and the manifestation of anhedonia (the inability to feel pleasure in normally pleasurable activities; Treadway & Zald, 2011).

The early dominance of the monoamine hypothesis, which postulates that depressive symptoms are the result of decreased serotonin, noradrenalin, and possibly dopamine, has given way to alternative theories that consider neural dysfunction and genetic factors. In fact, a meta-analysis of major depression in twins concluded that the disorder is a familial one, albeit complex, arising from the combined effect of genetic and environmental influences (Sullivan, Neale, & Kendler, 2000). Epigenetic studies have been investigating how individual environmental factors modulate gene expression in depression. For instance, the 3A serotonin genotype (HTR3A-42C>T) is associated with gray-matter loss in the hippocampus and PFC in depressed individuals who have experienced early-life stress (Gatt et al., 2010). And just as we saw with the rhesus monkeys, human carriers of the 5-HTTLPR short allele are more prone to depression if they have suffered one or more earlier stressful life events, giving more support to the idea that an individual's response to environmental stress is moderated by genetic makeup (Caspi et al., 2003; Karg, Burmeister, Shedden, & Sen, 2011).

Another line of research implicates brain-derived neurotropic factor (BDNF), which is involved in the growth of new neurons in the hippocampus and represents an important mechanism of adult brain plasticity. Stress suppresses BDNF synthesis in the hippocampus, and depressed patients have been shown to have lower serum BDNF concentrations than healthy subjects. Antidepressants and electroconvulsive therapy seem to increase BDNF serum concentrations and reduce depressive symptoms (Piccinni et al., 2009; Shimizu et al., 2003). BDNF seems a good candidate for study in depression, as BDNF genetic variations influence brain areas related to mood (Palazidou, 2012). The Met allele BDNF genotype has been associated with abnormal secretion of BDNF, abnormal hippocampal neuronal function, and impaired episodic memory (Hariri et al., 2003) as well as smaller hippocampal volume (Frodl, Möller, & Meisenzahl, 2008). However, the evidence for the involvement of BDNF in the pathophysiology of depression is inconsistent and does not support a simple causal relationship between total brain BDNF levels and mood (Groves, 2007). Rather, the role of BDNF in modulating activity-dependent plasticity within emotional processing networks may be compromised in depression. In other words, BDNF may not control mood directly, but is critical in the process that determines how a plastic change influences mood (Castrén, Võikar, & Rantamäki, 2007)...

This has been an excerpt from The Neuropsychotherapist's Essential Guide to the Brain Part 14 - Depression Part 2. To download the full article, and more excellent material for the psychotherapist, please subscribe to our monthly magazine.