Guide To The Brain Part 13 – Depression 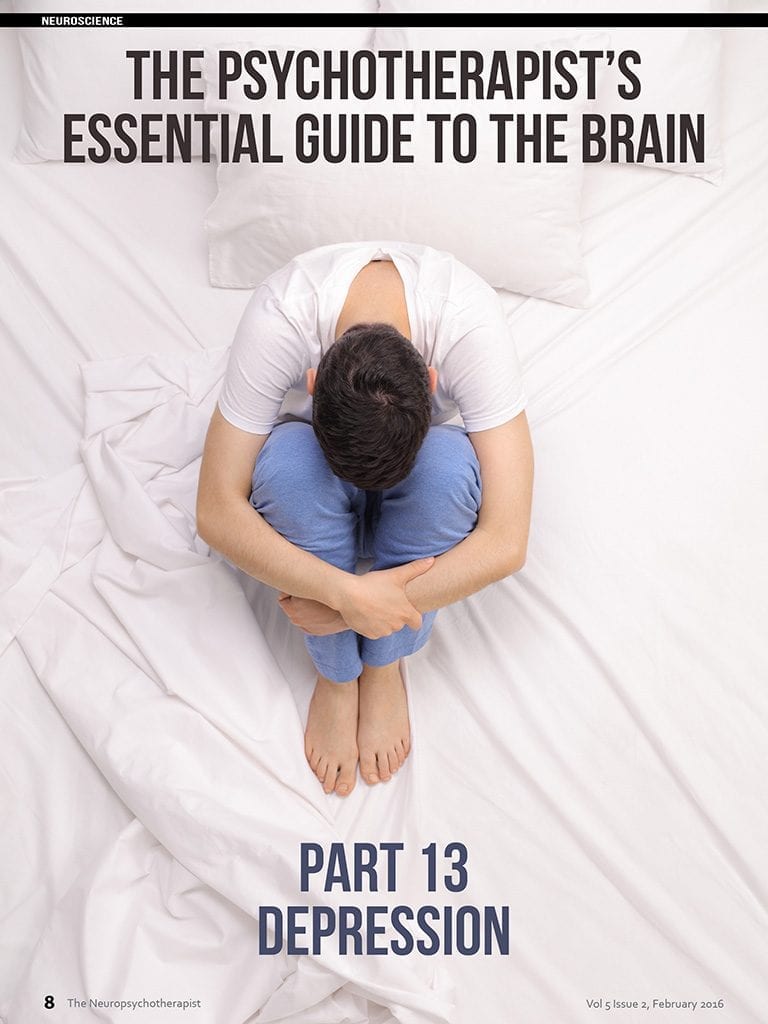 The manual also considers depressive states arising from medical conditions such as stroke, traumatic brain injury, Parkinson’s disease, and others, with two further categories covering other specified and unspecified depressive disorders (American Psychiatric Association, 2013). Here we will focus on major depressive disorder (MDD).
Depression is marked by a deep sense of sadness and reduced motivation and activity levels. Most people suffering a bout of major depression experience a recovery phase—within 3 months for 40% of sufferers, and within a year for 80%. But some suffer chronic depression (dysthymia) that persists for years (American Psychiatric Association, 2013). Factors that influence risk and prognosis are temperament, environmental factors such as adverse childhood experiences and stressful life events, genetics, and physiological factors. According to the World Health Organization (WHO), depression affects an estimated 350 million people globally (WHO, 2016).

Brain Regions Involved in Depression
There are a number of brain regions implicated in affect regulation that can play a role in depressive disorders. They include the prefrontal cortex (PFC), anterior cingulate cortex (ACC), hippocampus, amygdala, and nucleus accumbens (Davidson, 2000, Davidson, Pizzagalli, Nitschke, & Putnam 2002; Grawe, 2007; Kandel, Schwartz, Jessell, Siegelbaum, & Hudspeth, 2012; Lambert & Kinsley, 2004). We will look at these areas, as well as the role of the lateral habenula and brain stem, in depression.

The Prefrontal Cortex in Depression
The prefrontal cortex (PFC) plays a dominant role in the determination of personality and temperament, guiding our behavior based on our goals and values. The PFC hemispheres appear to have different functions in this respect, with the left PFC tending towards positive goals and emotions in the form of an “approach” orientation while the right PFC specializes in avoidance goals and negative emotions (Davidson & Henriques, 2000; Grawe, 2007). Individuals with greater activation of the left PFC can experience more positive emotions in general than those who’s right PFC predominates.
Depression often entails a generally underactive PFC, with hypoactivity more pronounced on the left than the right (Davidson et al., 2002). This results in a deficit of positive feelings and approach-orientated goal seeking accompanied by a surplus of negative ruminations. Processing of reward and punishment is also lateralized across the hemispheres of the PFC, with the left responding more strongly to rewards and the right to punishment. A study by Henriques and Davidson (2000) demonstrated that depressed individuals doing tasks that resulted in rewarding, neutral, or punishing outcomes did not respond to rewards, whereas the control subjects did. This propensity to respond to punishment but not reward poses serious problems when trying to establish positive goals and rewards for depressed clients. However, this may be overcome by raising the overall level of activation of the PFC, thereby increasing reward processing. Antidepressant therapy has been found to increase dorsolateral PFC activity (Fales et al., 2009) and may be the most expedient way to get clients to engage in rewarding approach goals. This may not be the case, however, if there is a significant and habitual dominance of the right PFC over the left—pharmacological treatment with serotonin reuptake inhibitors (SSRI) has shown poor outcomes (Grawe, 2007).

The hypoactivation of the PFC that is typical in depression is also associated with reduced gray matter volume along with volume decreases in the anterior cingulate cortex, orbital frontal cortex, (Bora, Fornito, Panetlis, & Yücel, 2011; Grieve, Korgaonkar, Koslow, Gordon, & Williams, 2013) and glia cells (Grawe, 2007). These findings raise the question of cause and effect: Does reduced volume in these areas cause depression, or is it a result of being depressed? Is the decreased PFC blood flow and metabolism causing the reduced volume, or is it the other way around? We don’t know.
A recent study on childhood depression found that depression in this time of life was associated with markedly increased rates of cortical volume loss and thinning across the entire cortex in comparison with the brains of non-depressed children (Luby et al., 2016). The study found that synaptic pruning of gray matter was particularly vigorous in adolescents who had experienced symptoms of depression during their childhood. In fact, the researchers found marked decreases in the right hemisphere with only marginal effects in the left—a seeming paradox given that right dominance has been associated with depression. Whatever the case, it is certain that individuals who have undergone substantial change of this kind in the neural architecture will struggle to match the capacity of healthy individuals to motivate themselves toward approach-oriented behavior.

The ACC in Depression
The anterior cingulate cortex (ACC) is an important area relaying information from the limbic regions to the PFC, providing integration for visceral, attentional, and affective information for self-regulation and adaptability (Thayer & Lane, 2000). The ACC is involved in attentional processing, and especially so when there is a high demand for the attention of executive functions as the individual is faced with conflicting demands, motivations, and uncertainty (Grawe, 2007). When confronted with such difficult situations, the ACC ensures the right processing resources are made available. If things are not going the way we would like them to—producing a neural state of inconsistency—the ACC recruits areas such as the PFC to resolve such inconsistencies (Grawe, 2007).
In simplistic terms, depressed individuals have a chronically underactivated ACC, and insufficient effort is made to recruit other brain resources when things are going wrong and something needs to be done about it. The demands of the environment can quickly overwhelm the individual whose ACC is not calling into action the right neural resources.
The ACC can be divided into two different functional areas: (a) the affect subdivision, encompassing the rostral and ventral areas connected with limbic and paralimbic regions—involved in regulating responses to stressful events, emotional expression, and social behavior; and (b) the cognitive subdivision, comprising the dorsal regions closely connected with the dorsolateral prefrontal cortex—involved in processing cognitively demanding information (Davidson et al., 2002). Accordingly, hypoactivation of the affect subdivision may blunt emotional experiencing and arousal, while hypoactivation of the cognitive subdivision may impair the recruitment and monitoring of executive functions to meet challenges.

Davidson et al. (2002) hypothesized that there may be two subtypes of depression, an ACC-subtype and a PFC-subtype:

This has been an excerpt from The Psychotherapist's Essential Guide To The Brain (Part 13): Depression. To read the full article, and more excellent material for the psychotherapist, please subscribe to our monthly magazine.