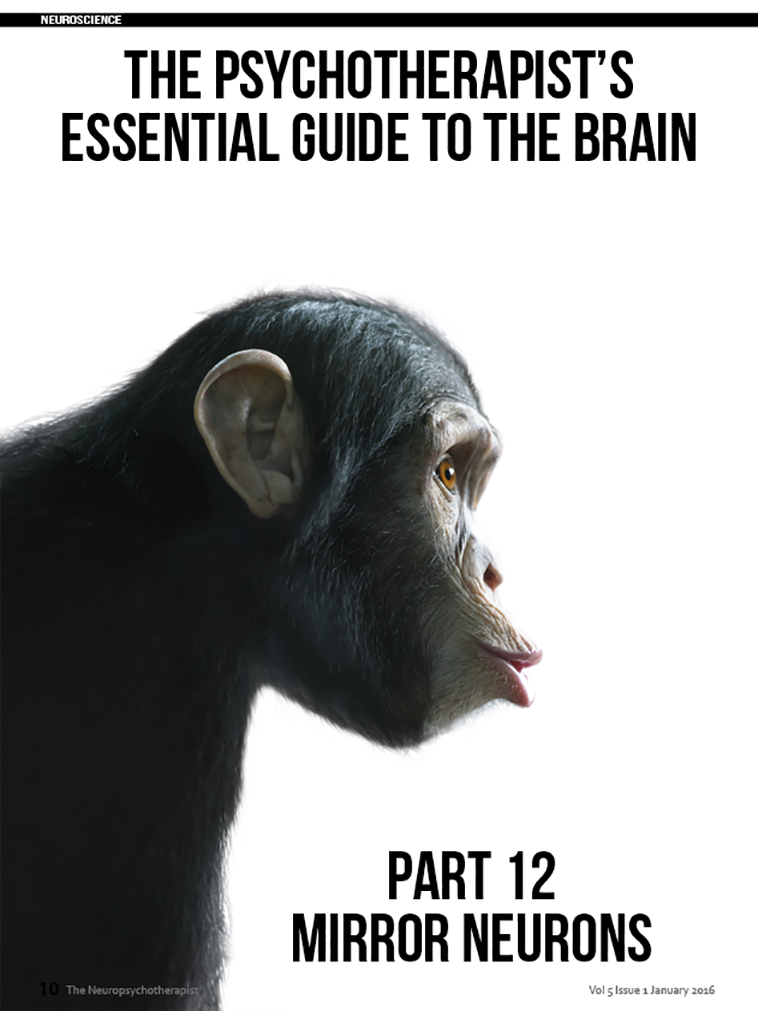 Italian neuroscientists in the mid-1990s were studying the premotor areas of the frontal lobes of monkeys when they discovered a remarkable connection between the firing of neurons in the motor cortex and visual perception (Gallese et al., 1996). While monitoring a neuron that had been activated when a monkey ate a peanut, researchers noticed that the same neuron was activated when the monkey simply saw the researcher eat a peanut. It was as if the motor neuron was “mirroring” what the monkey saw. Perception and action were seen to be linked in a way that had not previously been understood. As it turned out, some of these mirroring neurons where highly specific in their response to visual perception—such as only firing at the perception of picking up a banana with the right hand or peeling it with the thumb and forefinger (Rizzolatti & Arbib, 1998). Much research on mirror neurons has been conducted since this serendipitous finding, resulting in a deeper understanding of the social nature of our own minds.

Mirror neurons have both motor and perceptual function, and respond to acts that are perceived to carry purpose or intention. Mirror neurons will not “mirror” behaviour unless there is a predictable sequence based on intention—like the scientist bringing a peanut up to his mouth as opposed to randomly waving his hands around.  The observing monkey knows from experience what brining a peanut up to one’s mouth is all about and can anticipate the ensuing sensation of putting the peanut into his mouth.  The mirror system has learnt by experience.
Extending the study of mirror neurons from monkey to human, Marco Iacoboni and colleagues suggested that mirror neurons help us understand the intentional state of others (Carr et al., 2003). The basic premise is that our perception of another person’s predictable movements helps us understand what is going on in their mind. Although single-cell recordings of mirror neurons in human subjects would be too invasive for research purposes, much can be surmised from the work with monkeys and less invasive scanning of human subjects (such as EEG, MEG, fMRI, and TMS; see Ramachandran, 2011, pp. 141–142). Iacoboni and colleagues found an integrated system that includes mirror neurons in the frontal and parietal cortex, which coordinated with the superior temporal region to form a neural image of the mental state of another—the foundation of empathic attunement. These areas are at the intersection of inner and outer experience,  representing a convergence of visual, motor, and emotional processing (Iacoboni et al., 2001).  Cozolino (2014) put it this way:

The frontal lobes, especially in the left hemisphere, ground us in time through action plans, means–goals relationships, and a memory for the future. The parietal lobes, especially in the right, construct three-dimensional space, the context within which our real and imagined actions take place. And since our actions contain both purpose and context, human experience emerges from within the interwoven matrix of “space–time” constructed by the synergy of these two executive networks. (p. 212)

This prior learning of the mirror neuron system may have played a pivotal role “in our becoming the one and only species that veritably lives and breathes culture” (Ramachandran, 2011, p. 117)—a culture comprising an extraordinary complexity of knowledge, skills, and responses shared and passed down by way of language and imitation. Our unique ability to see the world from another person’s perspective and to construct mental models of another’s thoughts and intentions (known as “theory of mind”), integral to the formation and transfer of culture, appears to rest—at least in part—on the capacity of our mirror neuron system.

This has been an excerpt from The Psychotherapist's Essential Guide To The Brain (Part 12): Mirror Neurons. To read the full article, and more excellent material for the psychotherapist, please subscribe to our monthly magazine.