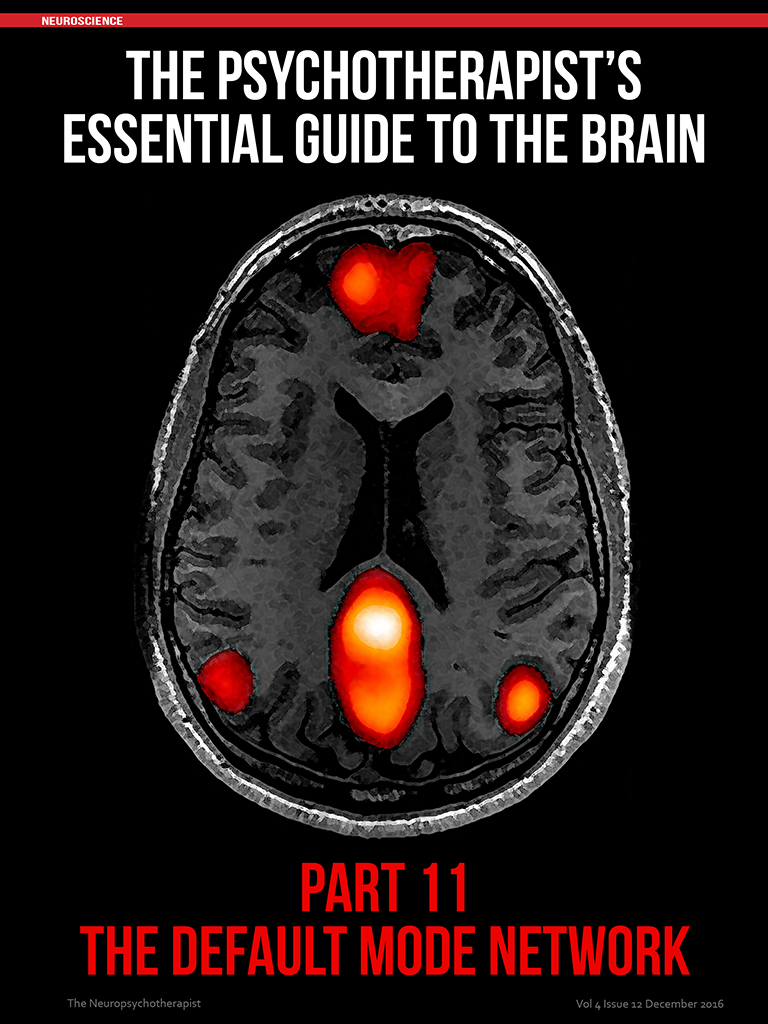 We are social beings with sophisticated and complex systems of relating to one another. The psychological needs of pain avoidance, orientation/control, and attachment are very often social in nature—the satisfaction, violation, or deprivation of these needs happens primarily in a social context, impacting our self-esteem and sense of well-being. You feel real pain when betrayed by a friend, disorientation when you get different messages about your role at work, a breach of attachment when your spouse fails to let you know they are going to be late home, and so on. All our fundamental psychological needs are most fully satisfied or most severely violated in a context of “social”.

In 1997, Gordon Schulman and colleagues (Schulman et al., 1997; Schulman, Fiez et al., 1997) reanalysed nine previous positron emission tomography (PET) studies on visual processing to find out which brain regions were commonly activated across a diverse number of cognitive tasks: the first paper looked at common activation of regions when doing a task, and the second paper focused on common activation of regions when not doing a task. They made the surprising discovery that a shared set of brain regions was activated whenever subjects were resting from a cognitive task. These regions were initially given the label “task-induced deactivation network”, and then later they were labelled the default mode, or default mode network (DMN) (Lieberman, 2013). Since these early studies, investigations using similar imaging-based techniques have been continued, as researchers try to understand what this default network is doing, and why.

Listen to our podcast on the default mode network

The activation patterns of the DMN revolve around episodic memory, self-projection, and self-referential processing, located in hubs in both the medial prefrontal cortex (mPFC) and the posterior cingulate cortex (PCC). They include the precuneus, the orbital frontal gyrus, the anterior cingulate gyrus, the inferolateral temporal cortex, the parahippocampal gyrus, and the lateral parietal cortex (Buckner & Carroll, 2007; Fox et al., 2005; Konishi, McLaren, Engen, & Smallwood, 2015; Schulman et al., 1997; Thomason et al., 2008). In a nutshell, these activation patterns revolve around thoughts about ourselves and others, and the relationships we have with others; remembering the past; and planning the future. It is an automatic activation pattern that is always on when we are not focused on the external environment or on any particular cognitive task. We might be indulging in self-reflection, thinking about what others might be thinking (Theory of Mind), re-evaluating a past conversation, or practising a future one. The DMN network pattern that supports social thinking is deactivated when there is non-social thinking happening, and when we have finished with a non-social cognitive task the DMN immediately lights up again. This does not mean that the PFC does not light up with some other nodes of the DMN during a non-social task, but rather that the whole DMN signature is not maintained during non-social cognition.

Recent studies now suggest the DMN plays a role in higher order cognition, allowing cognition to be shaped by information from stored representations (memory) as well as by information in the immediate environment (Konishi et al., 2015). According to these researchers, the DMN may not be merely a “task-negative” system that is on when cognitive work stops, or a network that is only activated by social themes. Rather, the main mPFC–PCC hubs of the DMN may allow cognition to be guided by memory instead of relying just on immediate perceptual input. Higher order thinking that involves imagining the future or taking the perspective of another person, or other complex introspection, relies on representations (memory) that are not present in the immediate external environment, and thus the DMN comes into play.

Matthew Lieberman (2013) introduced a number of interesting shifts in perspective about the DMN. Of these, one of the most interesting was that we are primed to be so social because of this default activity—rather than assuming we are socially interested and therefore we default to this network. When we are at rest from specific cognitive tasks, it seems, the brain is engaged with thoughts about the very complex social world. Perhaps, as Lieberman suggests, this is an important priming of our thought processes that enables us to be more socially savvy when we engage with others.

If we are so socially focused, and our default is to be thinking about self, others, and relationships, then we need to ask the question: Do people with autism spectrum disorder (ASD) have the same default mode? Not surprisingly, there seems to be a deficit in the connectivity of the DMN in people with ASD—the stronger the symptoms the greater the disconnect. Specifically, there is a lack of connective strength between the mPFC and the PCC (known as the default mode midline core) in those with ASD compared to control subjects, and increasingly so with the severity of the autism (Yerys et al., 2015). There is a common understanding that ASD is characterised by a hypo-connectivity between remote cortical regions and a hyper-connectivity within certain cortical regions—less globally connected but more locally connected, in other words. Along the same lines, studies have found that children with ASD show a reduced connectivity between the regions that make up the DMN, and increased local connectivity within these same regions (Washington et al., 2013). The long-distance connections between regions increase during childhood development, peaking around 11–13 years, but children with ASD fail to undergo the typical strengthening of connectivity within the DMN network into adolescence (Washington et al., 2013). Without normal DMN activation when at rest, the ASD person is not being primed—neither rehearsing nor evaluating “social” as a default, but rather defaulting to more specific processing of regions in a more neurally isolated way.

This has been an excerpt from The Psychotherapist's Essential Guide To The Brain (Part 11): The Default Mode Network. To read the full article, and more excellent material for the psychotherapist, please subscribe to our monthly magazine.