Guide to the Brain Part 10

The Psychotherapist’s Essential Guide to the Brain Part 10
Striatum, Motivation and Control 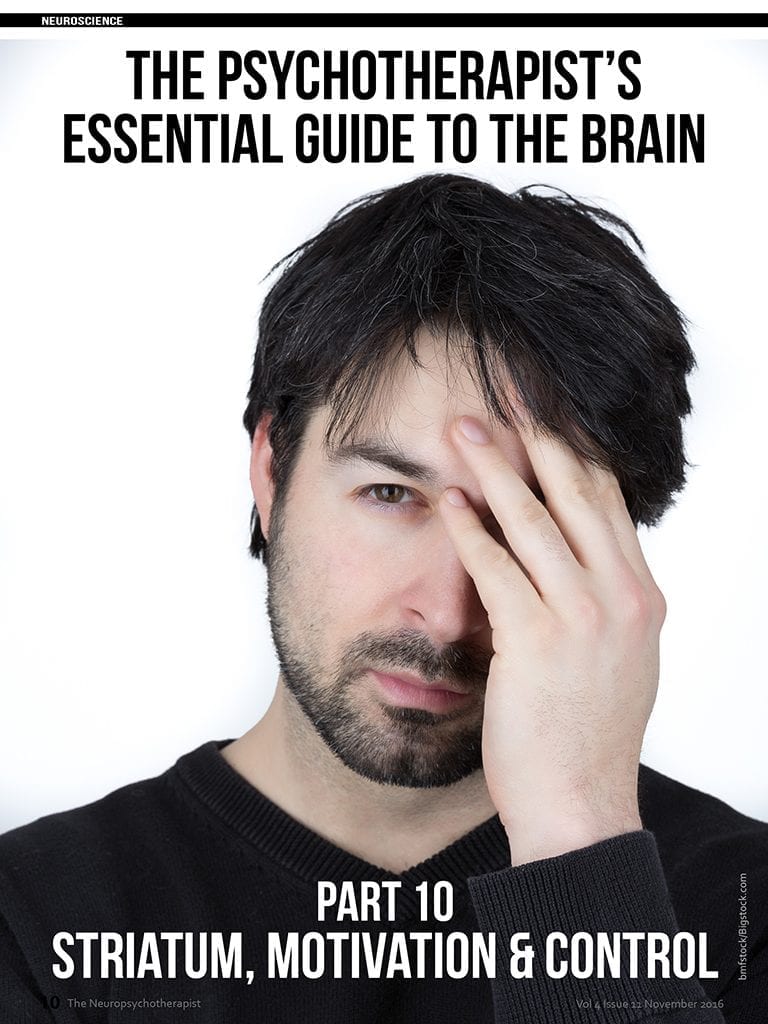 In 1988, French neurologist Michel Habib and colleague Michel Poncet became intrigued by stories of people who would all of a sudden lose their motivation and become completely apathetic. For example, a 64-year-old retired police officer had suddenly become apathetic, inactive and prostrate. He was admitted to the neurology ward a few weeks after the onset of these behavioural changes and was assessed as having some muscle rigidity with decreased spontaneous movements, facial amimia, and Parkinson’s-like gait. His CT scan seemed normal for a patient of his age, but he displayed a dramatic decrease in spontaneous activity: the man was unable to make plans and seemed to have no will or desires—not even a desire to eat or a preference for any particular foods. Furthermore, when asked what was going on in his mind, there appeared to be no spontaneous mental activity, yet he was fully conscious and orientated. When questioned about his mood, he said he wasn’t sad, depressed, or anxious.

Another very similar case involved a 60-year-old university professor, highly respected in his field, who also displayed a dramatic decrease in activity and motivation, according to family and peers. His neurological exam found a moderate slowing of movements and poor spontaneous verbal expression. For someone who had been a hyperactive professional he was surprisingly unconcerned by his sudden loss of motivation. His relatives described him as energetic, motivated, and highly invested in both his work and leisure activities, such as gardening, reading, and fine cuisine. Something dramatic had happened to this man’s motivation. This radical change in his motivation and demeanor persisted and was again observed at a 7-year follow-up. He described his condition in these words:

I just lack spirit, energy . . . . I have no go. I must force myself to get up in the morning; I do things just because I ought to, without any liking or enthusiasm. I have no appetite or need for eating; I only eat by principle.

He could carry out some professional tasks, but as a routine only, not because he had any motivation to do them. He would not initiate conversations; he was never bored, or anxious, or depressed; and he never complained about anything. He still used to go to board meetings but was never the first to speak. He seemed to be totally shut inside a profound passivity, unaware and unconcerned. When asked a question he would answer appropriately, but when asked about what he was thinking or if he had anything to say, he would typically respond with: “I’m just thinking of nothing . . . no idea, no question, no thought at all.”

These and other similar cases, Habib would find, had injuries to regions of the basal ganglia in common: damage either to the striatum, by way of tiny pinpricks of burst vessels restricted to the caudate nuclei, or the globus pallidus After consideration of these cases and the neurological evidence, Habib went on to formulate a model of a cortical–subcortical loop that is involved in converting motivational processes into behaviour (Habib, 2004). He showed how the limbic (or ventral) striatopallidal circuit he described receives emotional information from the amygdala and hippocampus and projects to the rest of the basal ganglia involved in initiating and organising motor acts (Habib, 2004).

This has been an excerpt from The Psychotherapist's Essential Guide To The Brain (Part 10): Striatum, Motivation and Control. To read the full article, and more excellent material for the psychotherapist, please subscribe to our monthly magazine.