Growing organs in the lab – no longer science fiction

Mirella Dottori loves looking through the microscope at tiny, embryonic human brains. She describes them as a “beautiful” network of nerve cells, called neurons, reaching for and passing messages to one another. “They have these long extensions and you can see they’re looking for something to attach to,” she says. “It’s like a grapevine just spreading out.”

Associate Professor Dottori, a developmental neuroscientist, and her team of researchers at the University of Melbourne’s Centre for Neural Engineering grow clusters of cells resembling miniature human brains.

The Centre is part of an ambitious global effort to use stem cells to grow tiny versions of human organs, called organoids.

These organoids could allow researchers to study how diseases affect human cells. It’s an exciting prospect for scientists used to experimenting with the brains of mice, which might not be accurate reflections of the human brain. 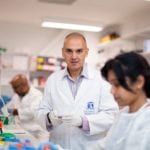 “We always presume or hope the human brain is similar because that’s the best we have had to work with,” says Associate Professor Dottori. “But now with human stem cells we can really ask that question: how does the human brain form?”

In understanding how the brain forms, we can better understand why diseases develop in some humans and not in others.

Scientists believe that brain organoids could pave the way for major breakthroughs in the fight against neurological conditions such as autism, epilepsy and schizophrenia.

These “brain fragments in a dish” are made from stem cells derived from human skin tissue.

They start out smaller than a crumb, so tiny you need a microscope to see them. After two or three months, however, they can grow to the size of a lentil. They develop in much the same way a human brain would in an embryo.

Organoids were first discovered in 2013 by Austrian researcher Dr Madeline Lancaster, who noticed that the human embryonic stem cells she was studying had started to form layered balls that looked like a part of the brain.

Associate Professor Dottori grows organoids that mimic different regions of the brain so scientists have a better understanding of how the brain develops.

“It’s been quite insightful because we can play with the mini-brains,” she says. “We can stimulate them and also add things to see how they respond.”

The mature brain in a human body uses external senses, such as touch, sight and smell, to activate the neuronal networks within it to fire. In a dish, however, scientists use a tiny network of electrodes to stimulate the cells. Then they look at the firing patterns of neurons – how nerve cells communicate and transfer information along the network.

The next step is to apply their understanding of the brain’s chemical and electrical workings to different neurological diseases. For example, Associate Professor Dottori’s team made brain organoids using stem cells from autistic patients. They can then compare them to organoids from patients without autism.

“We’re using stem cells to model autism,” she says, “to better understand the disease so we can see what regions of the brain are really affected, what are the neurons that should be connecting together that are not.”

Associate Professor Dottori says she became passionate about the potential for finding a cure to Friedreich’s ataxia, a rare genetic disease that damages the nervous system, after attending a meeting with patients affected by it.

“I saw girls my age in wheelchairs – beautiful girls and very smart and just wanting to live a normal life,” she says. “I thought to myself, ‘that could have been me’.”

But there haven’t been good animal models that can mimic the disease, which makes it difficult to test drugs that could cure it. Making organoids from the stem cells of Friedreich’s ataxia patients could help scientists find that cure.

Such research needs an interdisciplinary approach. The Centre for Neural Engineering, led by Professor Stan Skafidas, brings together neurologists, geneticists, electrophysicists and engineers to study the electrical and chemical workings of neurons. 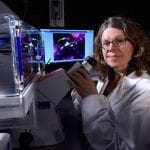 Associate Prof. Dottori says she is passionate about the potential for finding a cure to rare genetic diseases such as Friedreich’s ataxia.

“It’s not just about having tissues in a dish,” says Associate Professor Dottori. “We really need the engineering technologies to do something with it.” She has been working with engineers from the University’s School of Engineering to construct tiny scaffolds that can conduct electricity and provide a 3D structure for the cells to cling to, rather than just growing them flat in the dish. Creating and watching a lab full of mini-brains at different levels of growth is a full-time job.

“It’s been quite insightful because we can play with the mini-brains” Associate Professor Mirella Dottori, developmental neuroscientist at the University of Melbourne’s Centre for Neural Engineering

“It’s like a factory,” she says. “You have to be maintaining the lines, setting up new cells to start becoming neurons, you’ve got mature neurons, you’ve got a full spectrum of experiments at different stages constantly happening to keep things moving along.”

But all the work is done in the hope that, eventually, scientists will be able to grow a whole brain in the lab.

“There are no boundaries,” says Associate Professor Dottori. “Many years ago people wouldn’t have dreamt you could make a stem cell from a person the way we are now. We just had to find a way to do it.”