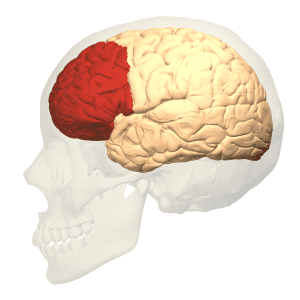 The prefrontal cortex (PFC) is the cerebral cortex covering the front part of the frontal lobe. This brain region has been implicated in planning complex cognitive behavior, personality expression, decision making, and moderating social behaviour. The basic activity of this brain region is considered to be orchestration of thoughts and actions in accordance with internal goals. The most typical psychological term for functions carried out by the prefrontal cortex area is executive function. Executive function relates to abilities to differentiate among conflicting thoughts, determine good and bad, better and best, same and different, future consequences of current activities, working toward a defined goal, prediction of outcomes, expectation based on actions, and social “control” (the ability to suppress urges that, if not suppressed, could lead to socially unacceptable outcomes). The frontal cortex supports concrete rule learning, while more anterior regions along the rostro-caudal axis of the frontal cortex support rule learning at higher levels of abstraction. (adapted from Wikipedia – see below for a more complete explanation)

The frontal lobes are probably of most interest to psychotherapy interventions such as CBT because they are home to the PFC, an area vitally involved in executive functions such as concentration, organization, judgement, reasoning, decision-making, creativity, emotional regulation, social–relational abilities, and abstract thinking—in other words, all the functionality we rely on for healthy relationships with ourselves and others. We will look at the PFC separately because of its special importance to psychotherapy; however, the frontal lobes in general regulate voluntary movement, the retention of non-task-based memories that are often associated with emotions, dopamine-driven attention, reward motivations, and planning, to name just a few.

The PFC is the part of the cerebrum that lies directly behind the eyes and the forehead. More than any other part of the brain, this area dictates our personality, our goals, and our values. When we have a long-term goal, for example, which we are pursuing with value-congruent action, we maintain a neural representation of that goal so as to not be distracted or influenced by competing goals or alternate values (Grawe, 2007). If the PFC is damaged, it affects our personalities and the ability to orient our behaviour in line with our values and goals. The PFC is vital to the sense of self and others necessary for healthy interpersonal relationships and decision making.

As in the case of so many discoveries in neuroscience, we often learn what a brain area can do when it becomes damaged in some way. Phineas Gage was a young, reflective, determined, and goal-oriented man who, despite his youth, had been promoted to foreman on an American railroad construction project. But in an unfortunate accident on September 13, 1848, an explosion drove a tamping rod up through the left side of his face and out the top of his head. The rod passed through and destroyed much of his left PFC. Amazingly, Gage survived, and was even speaking within minutes of the accident. He was still conscious and talking to a physician about half an hour later, having introduced himself saying, “Doctor, here is business enough for you.” Following his recovery, an early observation of a change in Gage’s personality was noted by Dr. John Harlow:

The equilibrium or balance, so to speak, between his intellectual faculties and animal propensities, seems to have been destroyed. He is fitful, irreverent, indulging at times in the grossest profanity (which was not previously his custom), manifesting but little deference for his fellows, impatient of restraint or advice when it conflicts with his desires, at times pertinaciously obstinate, yet capricious and vacillating, devising many plans of future operations, which are no sooner arranged than they are abandoned in turn for others appearing more feasible. A child in his intellectual capacity and manifestations, he has the animal passions of a strong man. Previous to his injury, although untrained in the schools, he possessed a well-balanced mind, and was looked upon by those who knew him as a shrewd, smart business man, very energetic and persistent in executing all his plans of operation. In this regard his mind was radically changed, so decidedly that his friends and acquaintances said he was “no longer Gage”. (Harlow, 1869, pp. 13-14) 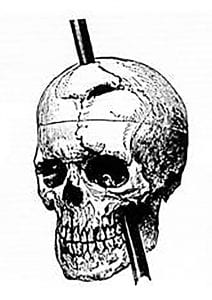 1868 diagram of Phineas Gage’s skull and the damaged caused by the tamping rod – by John M. Harlow

Clearly, some important functions of Gage’s personality had been altered by his injuries, although he did become more functional and socially adaptable as the years went on. Given a structured environment in which clear sequencing of tasks was part of the rehabilitation, Gage managed to retrain his brain to regulate itself in reference to values and goals.

The left and right sides of the PFC have different biases, with the left side oriented more toward approach, positive goals, and emotions, and the right side specialized more in avoidance and negative emotions. It is also worth noting that the left side of the PFC hosts more dopamine receptors/activity (associated with motivation and reward), while the right has greater norepinephrine activity (associated with anxiety). Individuals who appear to have a bias toward positive emotions may have a more activated left PFC, whereas right PFC activation is correlated with more negative emotional experiences. Any suggestion of a clear binary division is an oversimplification, as the experience of positive or negative emotions does not hinge purely on left/right PFC activation, but there is nonetheless evidence of a strong correlation.

In studies of the neural correlates of depression, it has been found that left PFC activity is underactive relative to right PFC activity. It seems that less access to the positive bias of the left PFC may make it more difficult for the depressed individual to engage in positive goal-oriented thought and behaviour. Similarly, the left PFC is more responsive to rewards than the right PFC, which is more responsive to punishment. Studies have found that the depressed individual is generally more sensitive to what may be perceived as punishment and does not respond as well to rewards. Moreover, the relative underactivation of the whole PFC in depressed individuals could account for them having less motivation for planning, problem solving, creativity, and so forth. In depression, not only is there underactivation of the PFC, but its volume has been found to be reduced as well. A depressed person with an underactive PFC of reduced volume is not going to demonstrate the rational problem solving abilities of someone without such deficits—the neural integrity to support such resilience is simply not there. This is where the active, approach-oriented and positively biased PFC of a therapist can be of great value to the depressed client. We will discuss the supportive right brain-to-right brain activity of therapy further when we address specific psychopathologies.

The PFC has been divided into a number of functionally distinct regions, described below.

Dorsolateral prefrontal cortex (DLPFC). The DLPFC is the topmost part of the PFC and is considered to have overall management of cognitive processes such as planning, cognitive flexibility, and working memory. This is an area specialising in problem solving and how to direct and maintain attention to a task. When we are focused on what is happening now, our working memory is engaged with the DLPFC and connecting with the hippocampus for the retrieval and consolidation of long-term explicit memories. A dysfunction in this area may lead to problems with working memory, processing in the hippocampus, and long-term memory, as well as the integration of verbal expression with emotions. Such memory deficits have been associated with PTSD due to an underactive left DLPFC. Other DLPFC deficits can manifest as a lack of spontaneity and affect (flat rather than negative), and attention deficit—due to an inability to maintain sufficient attention to see a task through to completion. In obsessive–compulsive disorder (which we will consider separately in a later section the DLPFC plays an important role in strengthening attentional skills to momentarily break the compulsion circuit and give the orbitofrontal cortex a chance to inhibit the runaway activation of the amygdala. As with many brain regions, there are significant hemispherical differences within the dorsolateral prefrontal cortex, the left DLPFC being associated with approach behaviours and the right with more avoidant behaviours. 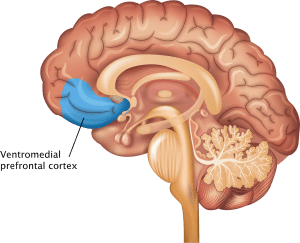 The ventromedial prefrontal cortex helps us make decisions based on the bigger picture gathered from connections to the amygdala, temporal lobe, ventral segmental area, olfactory system, and the thalamus.

Orbitofrontal cortex (OFC). The OFC, like the DLPFC, is involved in the cognitive processing of decision making; however, because of its close connection with the limbic system, it is particularly associated with our ability to make decisions based on emotional information. The OFC also plays a major role in forming social attachments and regulating emotions. This region can be thought of as a convergence zone for sensory and emotional information, effectively integrating external and internal worlds. Social information is processed and used to guide us in our perceptions and interactions, and the OFC plays an important role in the interpretation of these complex social interactions, including, for example, the ability to understand a joke. The OFC may help us predict the reactions of others and modulate our behaviour accordingly. When there is a dysfunction in the orbitofrontal cortex, the normal cortical–subcortical modulation is not optimal—as is likely the case in borderline personality disorder (Schore, 2012). As with other areas of the PFC, the OFC has hemispherical differences. The left OFC is associated with positive emotions, while the right OFC is associated with more negative emotions.

Ventromedial prefrontal cortex (vmPFC). This part of the PFC helps us make decisions based on the bigger picture gathered from connections to the amygdala, temporal lobe, ventral segmental area, olfactory system, and the thalamus. It is very well connected, receiving and sending a lot of information that influences many brain regions, including the amygdala. The vmPFC plays an important role with the OFC in regulating our emotions, especially in social situations. It is also vital for personal and social decision making and the ability to learn from our mistakes. Our capacity to make judgements and allow our emotions to assist in decision making is mediated by this region of the brain. Activation of the vmPFC is also associated with courage, suppression of negative emotions, compassion, shame, and guilt.