Some researchers conceptualize the hippocampus not as a storage location for memory, but as a control centre that connects areas of the neocortex to activate the effective recall of memory. From this perspective we might think of the hippocampus as the brain’s Google search engine, allowing fast and efficient searching of established memories in the neocortex to help assess and plan. A well-known function of the hippocampus is the capacity to learn and retrieve spatial memory: the what, when, and where qualities of an experience.

Researchers have found that neurogenesis—the creation of new neurons—happens in the hippocampus with new learning. There is an upsurge of new neurons and associated circuits when a new task is learned, particularly in the case of physical tasks, and in enriched, stimulating environments. If the hippocampus is damaged, however, this can have significant effects on overall cognitive functioning, especially on spatial memory, and on explicit memory in general. Damage to the hippocampus can occur through prolonged exposure to stress hormones such as glucocorticoids (to which the hippocampus is particularly sensitive), highlighting the seriousness of chronic stress and its physiological impact. Basic feedback mechanisms in the hippocampus that help modulate the release of glucocorticoids during stress may be compromised, compounding the effects of chronic stress by leading to chronically elevated cortisol levels. It has been observed that some people suffering post-traumatic stress disorder (PTSD) have smaller hippocampal volume than the general population, and one study has found that this volume did not necessarily increase after therapy and symptom reduction (Lindauer et al., 2005). A compromised hippocampus may not anchor emotional reactions to a traumatic event to a specific time and space, and such reactions can reoccur inappropriately, as is typical in PTSD.

The hippocampus is also implicated in major depression, with findings of hippocampal volume being reduced as much as 8–19% in those with major depression, the reduction in volume being positively correlated with the duration of the depressive state. Similar correlations can be found with bipolar disorder and borderline personality disorder. It is possible that reduced hippocampal volume may be a risk factor rather than a consequence of chronic or excessive stress, so that individuals with a smaller hippocampus will be more prone to fear responses when exposed to traumatic events and less able to regulate that fear response (i.e., to keep the HPA axis stress-response cascade in check) and effectively integrate explicit and implicit memory of the trauma into long-term memory.
Much has been learned about the functions of the hippocampus through the study of a certain subject, Henry Gustav Molaison. Molaison, who in 1953 at the age of 27 had almost all of his hippocampus removed in an attempt to stop epileptic seizures, lost his ability to hold on to new semantic and episodic memories, being unable to consolidate them into long-term memory. He was able to remember what had happened a long time previously, and the older the memory the better he seemed to remember—just the opposite of what is normally observed. Molaison’s general knowledge of the world (his semantic memory) was intact, but everything that happened after his surgery seemed new to him: he could only remember new experiences for a few seconds. Even the ability to recognize himself as he aged was lost, although he could recognize himself in old pictures. Interestingly, Henry was able to learn complex motor skills, and retain these skills (what we know as procedural or implicit memory), but was unable to remember learning them (declarative or explicit memory). 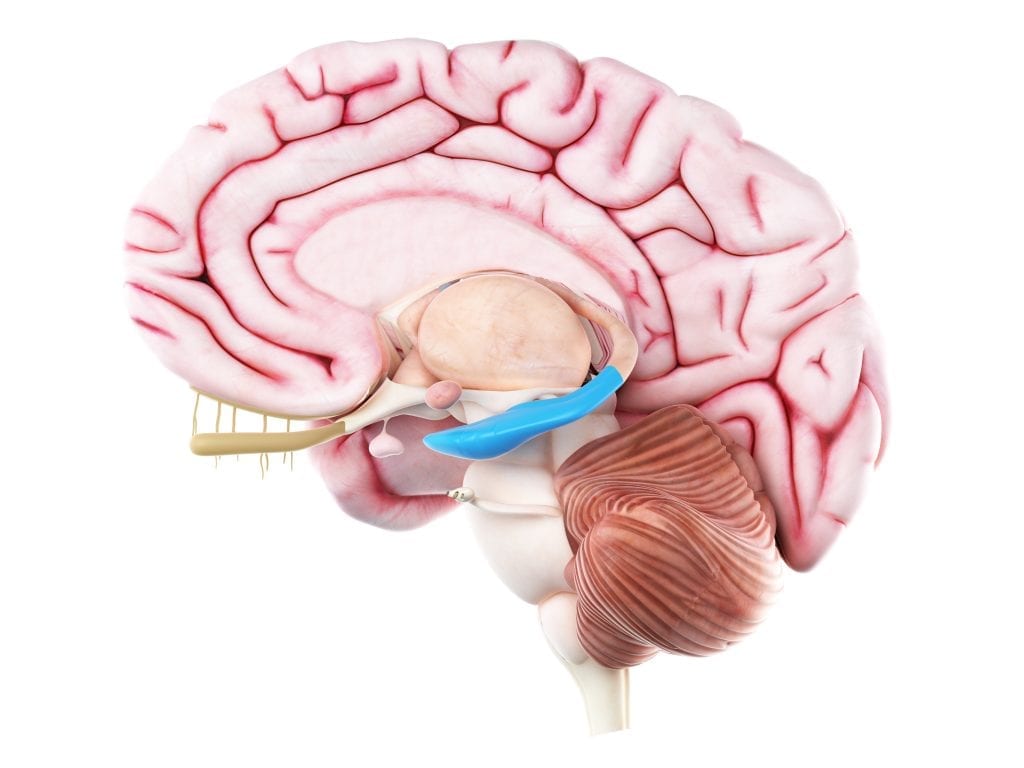 The left side hippocampus is represented here in blue. A compromised hippocampus may not anchor emotional reactions to a traumatic event to a specific time and space, and such reactions can reoccur inappropriately, as is typical in PTSD