A key inspirational figure in the nascent field of neuropsychotherapy was Klaus Grawe, whose clinical work integrated neuroscience and clinical psychology, as presented in his book Neuropsychotherapy: How the Neurosciences Inform Effective Psychotherapy (Psychology Press, 2007). We would like to honour the late Klaus Grawe through this brief biography, and acknowledge his leadership in this very important field. 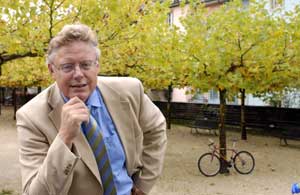 Klaus Grawe was Professor of Clinical Psychology and Psychotherapy in the Department of Psychology at the University of Bern, Switzerland. He directed an outpatient clinic for psychotherapy at the university (Psychotherapeutische Praxisstelle) as well as the post-graduate training program in psychotherapy for clinical psychologists and medical doctors at the Institute for Psychological Therapy in Zürich and Bern.

He earned his Ph.D. in clinical psychology in 1976 from Hamburg University.

From 1969 to 1979, Grawe was a clinical research associate at the Psychiatric Hospital at the University of Hamburg. During this period, he also trained in client-centred and behaviour therapy.

He co-founded the first inpatient psychotherapy ward at the same hospital, and started his first comparative treatment study. He also started to teach, supervise and train graduate and postgraduate students in clinical psychology and behaviour therapy.
In 1979 he was appointed Full Professor and Chairman of the Department of Clinical Psychology at the University of Bern in Switzerland. There he developed a new, empirically oriented curriculum in Clinical Psychology and Psychotherapy and founded an outpatient clinic, as well as the first post-graduate training program in research-informed psychotherapy. His research interests spanned a wide range of major topics in psychotherapy, including outcome and process research, assessment, quality management, large-scale meta-analyses, and theoretical integration.

Klaus Grawe received substantial grants for psychotherapy research projects from the Swiss National Science Foundation. His achievements include more than 150 journal articles and book chapters, mostly in German. He was the author, co-author, editor or co-editor of 12 books. The three most recent have had a large influence on the field of clinical psychology and psychotherapy, especially in Europe and German-speaking countries.

His 1994 meta-analysis on the outcomes of psychotherapy studies was the most comprehensive and ambitious in German, and triggered a heated debate in academic circles as well as in the wider community about the efficacy and effectiveness of various approaches and psychotherapy in general. He also contributed to German psychotherapy legislation as a scientific advisor. Although he viewed a sober analysis of the effects of psychotherapy as a necessity, his scientific heart was given to more fundamental questions such as: How does the therapeutic process develop? Which ingredients make a good psychotherapy beyond the limits of schools of psychotherapy? How can we best train psychotherapists for their demanding tasks? His later contributions focused on the integration of the new emerging fields of neurobiology and the brain sciences with clinical psychology and psychotherapy. His challenging book Neuropsychotherapie sold out a few months after publication.

Klaus Grawe impressed his colleagues and friends by his straightforward manner and wide-spanning theoretical, conceptual and empirical view, but also by his sense of humour, his warm interest in friendships, and his outstanding loyalty. His impact on psychotherapy in Europe and the world will last well beyond his recorded accomplishments.